Almandine , also known as iron clay garnet or iron clay garnet , is a mineral from the group of garnets within the mineral class of " silicates and germanates ". It crystallizes in the cubic crystal system with the idealized composition Fe 3 Al 2 [SiO 4 ] 3 , so from a chemical point of view it is an iron - aluminum silicate, which structurally belongs to the island silicates .

Almandine is the iron analogue of spessartine (Mn 3 Al 2 [SiO 4 ] 3 ) and pyrope (Mg 3 Al 2 [SiO 4 ] 3 ) and forms a mixed crystal series with these , the so-called "pyralspite series". Since almandine also forms mixed crystals with grossular (Ca 3 Al 2 [SiO 4 ] 3 ), natural almandine has a correspondingly broad spectrum of composition with more or less large proportions of manganese , magnesium and calcium depending on the formation conditions . In addition, traces of sodium , potassium , chromium and vanadium , more rarely also scandium , yttrium , europium , ytterbium , hafnium , thorium and uranium may be present.

The mineral is transparent to translucent and typically develops rhombic dodecahedra or icositetrahedron, as well as combinations of these crystal forms, which appear almost spherical. Granular to massive mineral aggregates are also often found . In general, almandine crystals can reach a size of several centimeters in diameter. However, giant crystals with a diameter of up to one meter were also known. The color of almandine usually varies between dark red and red-violet, but can also be brownish-red to almost black.

Almandine is the most common type of garnet around the world and is often found in grades that are worth grinding and with a strong, glass-like sheen , which makes it a coveted gemstone .

Almandine was already known to Pliny the Elder (approx. 23–79 AD) under the name alabandicus and generally belonged to the “ carbunculus ”, i.e. red gemstones. It was named after the ancient city of Alabanda in Caria (Asia Minor, today in the Turkish province of Aydın ), where the stone is said to have been worked. Alabanda is therefore also considered a type locality for almandine.

In the Middle Ages, various variations of the name were in use such as alabandina , alabandra and alabanda . Albertus Magnus (around 1200-1280) introduced the name alamandina , which almost corresponded to the current form.

Around 1800 the designation almandine was finally fixed on the iron clay garnet by Dietrich Ludwig Gustav Karsten (1768–1810).

Curiously, the manganese sulfide alabandin , which was first described in 1784 and has a similar name, was also named after the Turkish town of Alabanda, although it has not yet been detected there.

The structural classification of the International Mineralogical Association (IMA) is one of the almandine to Garnet supergroup, where he together with Andradite , Calderit , Eringait , Goldmanit , Grossular , Knorringit , Morimotoit , majorite , Menzerit- (Y) , Momoiit , pyrope , Rubinit , Spessartine and Uvarowite form the garnet group with 12 positive charges on the tetrahedrally coordinated lattice position.

The 9th edition of Strunz's mineral systematics , which has been in effect since 2001 and is used by the International Mineralogical Association (IMA), also classifies almandine in the category of "island silicates (nesosilicates)". This is further subdivided according to the possible presence of further anions and the coordination of the cations involved , so that the mineral is classified according to its composition in the subsection “Island silicates without further anions; Cations in octahedral [6] and usually larger coordination “can be found, where it is found together with andradite, calderite, goldmanite, grossular, henritermierite, holtstamite, katoite, kimzeyite, knorringite, majorite, momoiite, morimotoite, pyrope, schorlomite, spessartine and uwarowite the "garnet group" with the system no. 9.AD.25 forms. The garnet compounds blythite, hibschite, hydroandradite and skiagite, which are no longer regarded as minerals, were also included in this group. Wadalite, at that time still grouped with the grenades, proved to be structurally different and is now assigned to a separate group with chloromayenite and fluoromayenite . The garnets irinarassite , hutcheonite , kerimasite , toturite , menzerite (Y) and eringaite described after 2001 would have been classified in the garnet group.

The systematics of minerals according to Dana , which is mainly used in the English-speaking area , also classifies the almandine in the category of "island silicate minerals ". Here it is together with pyrope, spessartine, knorringite, majorite and calderite in the "garnet group (pyralspite series)" with the system no. 51.04.03a to be found in the subsection “ Island silicates: SiO 4 groups only with cations in [6] and> [6] coordination ”.

Almandin with the idealized composition [X] Fe 2+ 3 [Y] Al 3+ [Z] Si 3 O 12 is the iron -Analog of Pyrop ( [X] Mg 2+ 3 [Y] Al [Z] Si 3 O 12 ) and occurs in nature mostly as a mixed crystal with pyrope, spessartine and grossular. With these end links there is unlimited miscibility, at least at geologically relevant temperatures, according to the exchange reactions

So far, no indications of a miscibility gap have been found for the mixture series Almandin-Grossular. Only for pyrope-rich pyrope-grossular-almandine mixed crystals was a miscibility gap detected at temperatures below approximately 600 ° C.

At the octahedral Y position, Al 3+ can be replaced by Fe 3+ , according to the exchange reaction

Garnets rich in almandine are usually formed during the metamorphosis of pelites and are often zoned. With increasing metamorphosis, i. H. With increasing temperature and pressure, garnets with a Spessartine and grossular-rich core grow, which become richer in almandine and pyrope towards the edge. Rims rich in Spessartine, however, indicate garnet growth with descending metamorphosis and low temperatures. The correlation of the iron, manganese and magnesium contents allows conclusions to be drawn about the mineral reaction through which garnet was formed during metamorphosis.

Almandine crystallizes with cubic symmetry in the space group Ia 3 d (space group no. 230) and 8 formula units per unit cell . There are numerous provisions for the edge length of the cubic unit cell of both natural mixed crystals and synthetic almandins. For the pure almandine terminal the lattice parameter z. B.  indicated with a  = 11.526 Å or a = 11.525 Å. Template: room group / 230

Birefringence and the formation of sector zoning have been observed in some natural almandine grossular mixed crystals. The explanation for this birefringence is a partially ordered distribution of Fe and Mg on the one hand and Ca on the other hand on the X-position of the garnet structure. This goes hand in hand with a lowering of symmetry to the tetragonal space group I4acd. More recent studies on a large group of aluminum grenades do not find any reliable evidence of a lowering of symmetry and ordering of cations. Lattice stresses ( stress birefringence ) are named as the cause of the birefringence .

Rhodolites , also commonly known as oriental garnets , are pink to red-violet almandine varieties , which, strictly speaking, are almandine-pyrope mixed crystals with a mixture ratio of magnesium: iron ≈ 2: 1 and a density of ≈ 3.84 g / cm³. Well-known occurrences of rhodolite include Brazil , India , Kenya , Madagascar , Mexico , Zambia and Tanzania .

The Malaya garnet is also an almandine-pyrope mixed crystal with the same find areas as rhodolite , but of a more reddish-orange color. It was named after the Swahili word malaya for "outside the family". 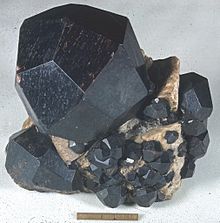 Almost black almandine from the " Russell Garnet Mine", Hampden County , Massachusetts, USA (comparative scale: 1 "(= 2.54 cm) with a notch at 1 cm)

Almandine is a characteristic mineral of metamorphic rocks such as mica schist , amphibolite , granulite and gneiss . From around 450 ° C, garnet rich in almandine forms in the reaction of chloritoid + biotite + H 2 O to garnet + chlorite . From approx. 600 ° C, garnets form when staurolite is broken down , and garnets can still be formed again even when the rock begins to melt, e.g. B. in the reaction of biotite + sillimanite + plagioclase + quartz to garnet + potassium feldspar + melt. Garnet only degrades into spinel + quartz at temperatures above 900 ° C or into orthopyroxene + sillimanite at high pressures .

Garnets rich in almandine can also form in igneous rocks such as granite and granite- pegmatite . The crystals are usually embedded in the mother rock (blasts) and separated from other almandine crystals. Garnets with the highest known almandin content of 86.7% (as of 1995) were found at Kayove in Rwanda , but almandine-rich crystals of around 76% have also occurred in Germany, including ground maize .

As a frequent mineral formation, almandine can be found at many sites, with around 2200 sites being known to date (as of 2014). Accompanied will almandine among other things, various amphibole , chlorite , plagioclase and pyroxene and of andalusite , biotite , cordierite , hematite , kyanite , sillimanite and staurolite .

In addition to its type locality Alabanda, the mineral has so far only appeared in Turkey in the garnet amphibolites near Çamlıca on the Asian side of Istanbul.

In Germany, almandine could be found in several places in the Black Forest ( Freiburg im Breisgau , Grube Clara in Oberwolfach) in Baden-Württemberg, in many places in Bavaria ( Bavarian Forest , Upper Palatinate Forest , Spessart ), near Ruhlsdorf / Eberswalde-Finow in Brandenburg, in some Places in the Odenwald (Erlenbach, Lindenfels), near Bad Harzburg in Lower Saxony, near Bad Doberan in Mecklenburg-Western Pomerania, near Perlenhardt and at Drachenfels ( Königswinter ) in North Rhine-Westphalia, in many places in the Eifel in Rhineland-Palatinate, in the pit "God's reward" can be found near Schmelz in Saarland, in the Diethensdorf quarry and near Penig, as well as in many places in the Ore Mountains in Saxony and in some places in Schleswig-Holstein ( Barmstedt , Kiel , Schleswig , Travemünde ).

In Austria, the mineral has so far been found mainly in Carinthia in the Gurktal Alps and the Saualpe , in the Koralpe from Carinthia to Styria and in the Niedere Tauern , but also in several places in Lower Austria ( Wachau , Waldviertel ), Salzburg ( Hohe Tauern ), in the Tyrolean Gurgler Valley and Zillertal as well as at some sites in Upper Austria and Vorarlberg.

In Switzerland, almandin finds have so far only been known from a few places in the cantons of Ticino ( Gotthard massif ) and Valais ( Binntal ).

The Ishikawa pegmatites in the prefecture of Fukushima on the Japanese island of Honshū and Shengus on the Haramosh in Pakistan, where well-formed almandine crystals of up to 15 centimeters in diameter have been discovered, are known for their extraordinary almandin finds . Crystals up to 5 centimeters in size were found in the mica schists and gneisses near Fort Wrangell in Alaska and near Bodø in Norway. In Italy, in South Tyrol , almandins of considerable size were found on the Granatenkogel in the Seebertal .

Almandine was also found in rock samples from the moon .

Like most of the other minerals in the garnet family, almandine is primarily used as a gemstone , which is cut into a facet shape or into cabochons , depending on its purity and clarity . Less noble varieties, i.e. varieties that are too dark and opaque, are also used as abrasives .

There is a particular risk of confusion with the various types of garnet due to the predominant mixed crystal formation between the individual end links. In addition, almandine can also be confused with ruby , spinel and red tourmalines . Due to the difficult differentiation, the different garnet names are now often used in the gemstone trade as a color designation, with almandine and rhodolite representing the pink to purple garnets.

The largest known and cut almandine gemstone to date is a 175  ct cabochon held at the Smithsonian Institution in Washington, DC.