The Hohe Tauern are a high mountain region in the central Alps in Austria . The approximately 120 km long and up to 3798  m above sea level. A. high main ridge represents the geographical center of the Eastern Alps . Here - in addition to the Ötztal Alps  - are the highest mountains in Austria. In the Hafner Group (part of the Ankogel Group) are the easternmost three-thousand-meter peaks in the Alps .

For the etymology of the name Tauern , as well as related terms, see the main article Tauern . 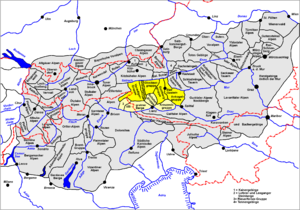 The nine mountain groups of the Hohe Tauern

Großglockner - the highest mountain in the Hohe Tauern.

The Hohe Tauern are located in the Austrian federal states of Salzburg , Carinthia and Tyrol ( East Tyrol ). The 150 km long main ridge marks the border between Salzburg and the other two countries; its southwestern edge belongs to the Italian province of South Tyrol .

According to the orographic division of the Eastern Alps (AVE) by the German and Austrian Alpine Association , the Hohe Tauern is divided into the following mountain groups (from west to east):

In the south of the main Tauern ridge are:

In the center of the region lies the Hohe Tauern National Park , in which the Austrian Alpine Association and landowners in the three federal states of Tyrol, Salzburg and Carinthia have contributed important areas of land. With 1836 km² it is the largest of the six Austrian national parks and therefore also the largest in the Alps. The protected area is divided into a core zone (nature zone according to IUCN ) and an outer zone (edge ​​zone) with forest and alpine farming .

The tourism has only increased slightly since the establishment of the National Park and focus on high-quality "green tourism" and natural gentle mountaineering laid. The environmental protection and the preservation of original branches of industry will receive specific attention. Some reservoirs play an important role in the energy industry ( Kapruner , Stubach and Maltatal ). The tungsten ore scheelite is mined in the Felbertal ; mining here alone makes Austria the fourth largest producer of tungsten in the world.

The geology of the Hohe Tauern is shaped by crystalline rocks, but the structure of the mountains is unusually complicated. From Paleozoic gneisses and mica schists to phyllites and quartzites to Mesozoic limestone there is a great variety, which is reinforced by the tectonics of the " Tauern window ". This is what makes the landscape so appealing: from vertical rock faces and sharp-edged ridges you can find all the transitions to gentle grassy peaks and raised bogs . Steep cirques and glaciers alternate with karst plateaus and whole groups of mountain lakes, popular peaks with those that are never climbed. The ice border of the Hohe Tauern runs between 2700 and 2900 m.

The valleys leading north to the Salzach have stepped construction (glacial trough valleys ) with waterfalls and huge gorges (Gasteiner and Liechtenstein gorges , Kitzloch gorges , etc.), which have safe footbridges for visitors. Important traffic connections over / through the Hohe Tauern are the Felbertauern tunnel , the picturesque Großglockner high alpine road , the Tauern tunnel (railway) and the Katschberg tunnel ( Tauern motorway ).

Main groups of the Hohe Tauern