This article deals with the South Tyrolean Alpine valley; for the municipality of the same name, see Ahrntal (municipality) .

Aerial view of the Ahrntal

The Ahrntal ( Italian: Valle Aurina ), also called Ahrn for short , is the approximately 35 kilometers long valley of the upper reaches of the Ahr in South Tyrol ( Italy ). 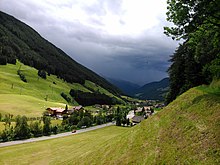 View of the Ahrntal near Steinhaus

The Ahrntal is the northern continuation of the Tauferer valley, which is also traversed by the Ahr . The Ahrntal and Tauferer Tal are therefore occasionally summarized under the term Tauferer Ahrntal , but there are considerable geomorphological differences. The wide, north-south running Tauferer Tal with its almost flat valley floor ends above Sand in Taufers at a gorge-like narrow point. This bottleneck, from which the valley now has significantly more significant gradients, is seen as the beginning of the Ahrntal. The Ahrntal widens again at the first village Luttach and now takes on the character of a long valley with a pronounced trough-like cross-section. The course of the valley swings to Luttach in an east-northeast direction and maintains this up to the source of the Ahr below the Birnlücke . Prettau , the uppermost area of ​​the valley after the narrow passage Klamm (e) , is sometimes viewed as an independent valley, separate from the Ahrntal valley .

The Ahrntal is surrounded by numerous mountains over 3000 meters high, which form the main Alpine ridge on the north side . On the orographically right side it is framed by peaks of the Zillertal Alps , in particular the Zillertal main ridge , which are made up of eye and flasher gneiss from the central gneiss zone. From here the Ahrntal also has by far the largest side valley, the Weißenbachtal . The mountains on the left side of the valley belong to the Venediger group , to which the Durreck group is also included, and are formed from rocks of the slate shell and the Upper Eastern Alpine old crystalline.

Significant parts of the left valley flanks and the end of the valley are protected in the Rieserferner-Ahrn Nature Park .

The valley is open to road traffic all year round from the south through the SS 621 starting near Bruneck . 28 mountain trails cross the border between Italy and Austria and connect the Ahrntal with North Tyrol , Salzburg and East Tyrol . The most well-known are:

The etymology of Ahrn is unclear. Peter Anreiter is thinking of an Eastern Alps Indo-European word for water * aur , which was adjective to * aur-in-a in the meaning of "water-rich". Cristian Kollmann considers an origin from a pre-Roman, possibly Rhaetian language class to be probable and interprets the name as "the area of ​​a person named Auri". Lois Craffonara contrast, uses alps Romanesque * AURINA (from the Latin aura meaning "breath of air, breeze, breeze, wind") as the name of origin and refers to the fact that with the Windtal, a side at Prettau could be locally already the same naming motif .