The Sarntal Alps ( Italian Alpi Sarentine ) are a mountain group in South Tyrol ( Italy ). The mountain range is bordered by Etschtal , Eisacktal , Wipptal , Jaufental , Waltental and Passeier . The Sarntal , which is located in the north on the Penser Joch ( 2215  m slm) ends, divides the mountain group into a western and an eastern part. In particular, the northern areas of the mountain group are comparatively little developed for tourism by South Tyrolean standards and are therefore not so overcrowded.

The highest peak is the Hirzer ( 2781  m slm ). The entire mountain group can be hiked through in about seven days on the Sarntal Horseshoe Tour on lonely, but well-marked high-altitude trails. The famous geological phenomenon of the earth pyramids can be found on the Renon north of Bolzano . The pilgrimage church to the Latzfonser Kreuz is at 2311  m slm one of the highest pilgrimage sites in Europe.

While the main ridges extend in a north-south direction, the geological units run predominantly in a south-west-northeast direction. The Sarntal Alps are often assigned to the Rhaetian Alps , but geologically this only applies to the north-western area. The so-called Periadriatic Seam runs along the line Meran- Rabenstein- Durnholz - Freienfeld , which here is congruent with the Judiciary line, which geologically separates the Central Alps from the Southern Alps. The rocks that make up the mountains are correspondingly diverse. In the north-west (Weißhorn, Hochwart, Hirzer) only slowly weathering slate gneiss of reddish-brown color dominates, similar to the neighboring Ötztal Alps . The rock formations in the southwest ( Ifinger , Plattenspitzen) along the Judicaria line are periadriatic intrusiva , predominantly tonalite (Ifinger-Tonalit), which emerge again in the northeast (Tatschspitze). The eastern area of ​​the mountain group (Jakobspitze, Kassianspitze) is made up of slate, colorful Brixen quartz phyllite , which erodes more easily and thus forms less high and bold formations. The entire southern part (line Tschögglberg-Villandersberg) is dominated by Bozen quartz porphyry , which belongs to the mighty plate of the Etschtal volcanic group and still forms mountain formations up to 2,600 m high. In addition, to a lesser extent, Val Gardena sandstone ( Val Gardena Formation ) occurs near Avelengo and Renon . 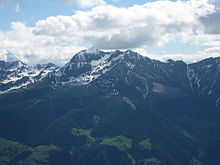 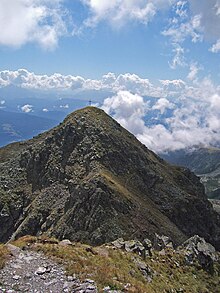 The Sarntal Alps enclose the Sarntal and its side valleys in a horseshoe shape . The mountain group is divided into two long, roughly north-south running ridges, the east ridge and the west ridge, which meet at the Penser Joch .

The western ridge has short side branches mainly in its northern part. The elevations of this train clearly exceed those of the east ridge. The more important peaks in this north-western group between the Penser and Wannser Joch include the Penser Weißhorn ( 2705  m ), the Zinseler ( 2422  m ), the Jaufenspitze ( 2481  m ), the Ötschspitze ( 2592  m ) and the Hochwart ( 2747  m ). The Sarntal and Stubai Alps meet at the northwestern Jaufenpass .

In its central part, the Hirzer ( 2781  m ) and the Alplerspitze ( 2748  m ), the two highest peaks of the Sarntal Alps, rise up. To the south of this the ridge merges into a massive granite bar, the elevations of which include the Verdins plateau peak ( 2680  m ) and the high plateau peak ( 2615  m ). Finally, this group rises above Schenna once again with the boldly formed Ifinger ( 2581  m ), a popular local mountain of Merano .

In the southern part of the west ridge, the mountain range flattens into the ridge of the Tschögglberg , which no longer has any prominent summit shapes.

On the Sarntal side there is the most important branch of the east ridge, namely the Sarntal middle ridge (also called Gentersberg ridge). This separates at the Hörtlanerspitze ( 2660  m ) from the eastern main ridge, runs briefly to the northwest and then turns to the southwest, thereby delimiting the long Durnholz Valley on the west side. Important peaks in the middle ridge are the Gentersbergspitze ( 2411  m ), Hoferspitze ( 2438  m ) and the Leiterspitze ( 2375  m ) as the southern end point. Another branch there is the Getrumkamm, which protrudes from the Kassianspitze to the west into the lower Durnholzer Tal and carries the Plankenhorn ( 2589  m ) and the Getrumspitze ( 2588  m ).

South of the Kassianspitze, the east ridge flattens out to form significantly gentler mountain forms, which, after the last major elevations of the Villanderer Berg ( 2509  m ) and the Rittner Horn ( 2260  m ), end in the ridge of the Renon .