The Stubai Alps are named after the Stubai Valley , which penetrates deep into the group from south of Innsbruck south-west.

Significant parts of the Stubai Alps show glaciation. The northern part around the Sellraintal and Kühtai is only slightly glaciated and a popular ski tour destination ( Zischgeles , Lampsenspitze , Pirchkogel , Sulzkogel ). The Hochstubai around the rear Stubai Valley is still heavily glaciated and a classic high-alpine tour area of ​​the Eastern Alps. There is also a glacier ski area, the Stubai Glacier .

Together with the neighboring Ötztal Alps to the west , with which they are connected on the Timmelsjoch , the Stubai Alps form one of the largest mass elevations in the Eastern Alps.

In the Alpine Club division of the Eastern Alps  (AVE) they have the number 31. The following line is the boundary: 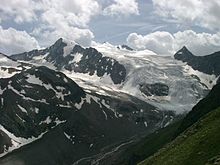 Glacier on the Wild Freiger 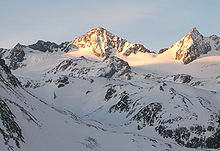 The 10 highest peaks in the Stubai Alps:

In the Stubai Alps, there are nearly 500 named and with spot elevation provided Summit. The better known include (in order of height):

Labeled panorama of the Stubai Alps, taken from the Daunscharte on the Stubai Glacier.

The Brenner Mesozoic, here in the Kalkkögeln, is superimposed on the crystalline subsoil

Most of the rocks that occur in the Stubai Alps belong to the Ötztal-Stubai crystalline , which is very similar to the Silvretta crystalline . The predominant rocks in the Ötztal-Stubai-Kristallin are various gneisses . These gneisses are accompanied by mica schists and amphibolites , some of which go back to former tuffs and tuffites . A specialty is the Winnebach granite , which occurs in the area of ​​the Winnebach hut and on the goose collar . It is a rock that was partially melted in the Variscan period , a so-called migmatite . The rocks of the Ötztal-Stubai crystalline, some of which are much older, were metamorphically overprinted in the Variscan period .

In the eastern part of the Stubai Alps, the Ötztal-Stubai Crystalline has only slightly metamorphically altered sedimentary rocks , the Brenner Mesozoic. It extends roughly from the Permian - Triassic border at least up into the Jura , with the majority of the rock being dolomites of the Middle and Upper Triassic. A band of Raibler strata is embedded in these dolomites, from which the degree of metamorphosis that increased from north to south in the Brenner Mesozoic can be clearly read. While this band mainly consists of clay slate in the north , it changes to mica slate in the south. Also part of the Brenner Mesozoic is the Blaser ceiling, a small, tectonically overlying unit that roughly encompasses the area from the boiler top to the Blaser . Mountains that are built from rocks from the Brennermesozoic include the Kalkkögel , the Serleskamm , the Tribulaune or the Telfer Weisse .

In the space between the Gschnitztal and the Pflerschtal , another tectonic unit appears above the Brenner Mesozoic: the Steinach ceiling . It consists mainly of quartz phyllite with inclusions of iron dolomite. In the hanging wall of this ceiling, quartz conglomerates Find anthracite leading seams . Plant fossils from these seams, which were found on the Nößlachjoch , can be assigned to the Upper Carboniferous .

Another unit worth mentioning is the Schneebergerzug . This approximately five kilometer wide unit starts west of Sterzing and extends to the Texel group . It is built up mainly from mica slate and from marble and quartzites . The rocks represent sediments that were deposited on the crystalline subsurface in the Paleozoic and were metamorphically overprinted in the Cretaceous around 80 million years ago. This Schneeberg metamorphosis is also responsible for the metamorphic overprinting of the Brenner Mesozoic and can also be detected in the adjacent parts of the old crystalline.

The terraces on the edge of the Inn valley, the Tyrolean low mountain range , are a periglacial rubble landscape that is also rich in glacial morphological phenomena, such as remains of dead ice .

Characteristic of the Ötztal-Stubai-Kristallin are the flat fold axes in the northern part and steep fold axes in the southern part; one speaks here of loop tectonics , which geologically goes back to the Variscan period. In terms of fault systems in the Stubai-Ötztal-Kristallin, those in SW-NE-direction are to be emphasized, which are to be followed the longest, for example the Matscher-Tal - Stubaital fault system.

In the Stubai Alps there are the following huts of the German, Austrian and Italian Alpine Club as well as the Province of South Tyrol:

The Stubai High Trail is a high- altitude hiking trail of around 120 km in length that connects eight huts on both sides of the Stubai Valley.