In gemology, cut is the type and shape of gemstones created by grinding in order to increase their shine and emphasize the optical effects inherent in the stone .

The choice of cut as well as the quality of the execution are decisive for the later value of the gemstone in addition to color and purity. Due to the experience required for this, among other things with the different properties of the materials used as gemstones, high-quality cuts for commercial use are usually carried out by specially trained gemstone cutters.

Basic options for the type of cut and designation of the grinding levels:
A) Smooth cut (cabochon), B) Facet cut (brilliant)
1) upper part, 2) lower part, 3) girdle

When grinding gemstones, a distinction is made between three different types of cut, which take into account the particular characteristics of the stone.

With smooth sanding, a smooth surface is created without any edges except for a possible girdle. It is preferably used for opaque to translucent gemstones. These often show a lively play of colors such as grains and spots. The smooth cut is also the only shape that fully unfolds special optical effects such as adularescence , asterism and chatoyance as well as the silky sheen typical of these stones.

The most famous smooth cut is the cabochon , but also able stones , ball - and Tumbled (Baroque stones) are among the smooth sections.

The facet cut has been known around the 15th century and consists of a large number of small, smoothly polished surfaces, the facets . It is mainly used with transparent stones, as they are able to reflect incoming light , refract it and often split it up in multiple colors ( dispersion ). This phenomenon, the fire of a stone, is intensified in particular by the modern full brilliant cut , which was developed in 1910. The optimal refraction of light is achieved through precisely defined angular relationships between the 57 facets (32 facets plus table in the upper part, 24 facets in the lower part) arranged according to a specific scheme. In rare cases, the point in the lower part is blunted by a culet in order to reduce the risk of damage such as cracks. However, since the culette always leads to a reduction in value of the stone (lower weight and visible, dark point when looking at the table from above), this is avoided by grinders as far as possible.

The brilliant cut was preceded by continuous development. First, only the natural octahedron surfaces of the diamonds were polished, before the creation of additional facets was gradually started.

Most of the facet cuts can be classified into two basic types: the already mentioned brilliant cut for more round shapes and the step cut for more angular shapes. There are also special shapes such as the rose cut , the oval and the pendeloque for round shapes, as well as the emerald cut and the scissor cut for angular ones. 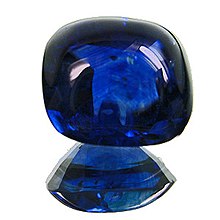 Finally, with the mixed cut, smooth and facet cut are combined with one another. Depending on the desired effect or fashionable taste, the upper side is designed as a cabochon and the underside as a facet cut ("Buff Top") or two different facet cuts are selected for the top and bottom. In some cases two types of cuts are combined on one side.

When defining cut shapes, the cutter refers to the geometric shape of the later gemstone. These are derived from the classic, geometric shapes such as B. the circle and the square. The cuts are differentiated according to the following basic shapes: