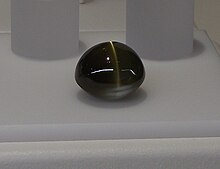 The chatoyancy (verb: chatoyieren), and cat's eye effect called, is a areal, shimmering light effect in minerals and precious stones .

In order to emphasize the effect in gemstones, these are cut as cabochons . With this spherical, round cut, when illuminated with a point light source, a bright streak of light becomes noticeable, which runs perpendicular to the fibers and wanders over its surface when the stone is moved. This strip of light is supposed to remind of the iris in a cat's eye ( French : chat ). Another explanation of the word is French chatoyer  = shimmer.

Chatoyance is created by numerous fine, parallel fibers or hollow channels embedded in the host crystal , which reflect the light preferably perpendicular to their axis. Some of the fibers act as light guides . With very small fibers, light scattering can also cause this effect.

With chrysoberyl , falcon's eye and tiger's eye , the cat's eye effect is created by hollow fibers. Embedded, needle-shaped rutile is in sapphire and star sapphire , and hornblende fibers are the cause of chatoyance in cat-eye quartz . This special effect can also be created with synthetic stones with embedded optical fibers . Good imitations can be made with colored glass substrates into which light guides are melted. With them you can see the light guide effect in the direction of the fibers.

The cat's eye effect occurs mainly in the minerals chrysoberyl, falcon's eye and tiger's eye, which are used as gemstones. The effect also occurs in many other minerals. The light guide effect is particularly beautiful with Ulexit , which, however, is too soft to be used as a gemstone.

All gemstone varieties with the cat's eye effect except for the chrysoberyl cat's eye should bear the name of the original mineral as an addition.

If the fibers do not run parallel, but rather, for example, given by the symmetry of the host crystal at 120 ° angles, the asterism becomes apparent with a suitable cut , for example with star sapphire. With a low number of embedded fibers or hollow channels, however, the mineral remains transparent and a light effect known as silk gloss is created.