The title of this article is ambiguous. Further meanings are listed under sapphire (disambiguation) .

Sapphire , even Safir , is a variety of the mineral corundum . All colorless and brightly colored varieties with the exception of red ruby are assigned to the sapphire . In a narrower sense, the term today refers to the blue variants, which range from sky blue to dark blue that goes into black and can vary in color depending on the incidence of light.

Like all corundum, sapphire also crystallizes in the trigonal crystal system with the chemical composition Al 2 O 3 and develops predominantly double-sided, barrel-shaped, six-sided pyramidal and prismatic crystals . Chemical resistance is also typical of corundum. For example, sapphire is acid-insoluble and only melts at a temperature of 2050 ° C.

As substances that contribute to the coloring, sapphires contain small admixtures of Fe 2+ and Ti 4+ or Co 2+ (blue), Fe 3+ (yellow and green), Cr 3+ (depending on the concentration red (by definition a ruby) ) to pink), Ti 3+ (pink) and / or V 4+ (purple, together with chrome and iron orange). The colorless leuco sapphire , on the other hand, does not contain any additives.

The classic gemstone sapphire is an intense, but not too dark blue (" Kashmir sapphire "). Sapphires found in the Yogo Gulch canyon in Montana are predominantly deep blue. A specialty among the gemstone sapphires is the so-called Padparadscha , which comes mainly from Asia , a pink to orange-colored variant, the name of which is derived from the Sinhala word for lotus blossom . Padparadschas originally come from Sri Lanka , but are now often color treated and can then come from all over the world.

The star sapphires awarded with the optical effect asterism are also in great demand . Due to the oriented embedded rutile needles , a more or less perfect, six-ray star-shaped reflection is evident . 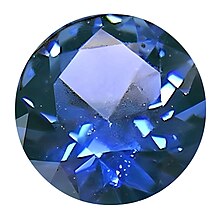 Until recently, the most important producers of sapphires were Sri Lanka and India ; today the gemstones also come from the USA , especially Montana, where sapphires are found in Yogo Gulch, Australia and Nigeria . Sapphires from Madagascar , more precisely Ilakaka , are considered to be of very high quality, but are usually declared as coming from Sri Lanka because they achieve higher prices. The production in Australia has decreased significantly in recent years.

The world's largest sapphire found so far, the so-called "Star of Adam", weighs 1404 carats and was discovered in Sri Lanka. Its value is estimated at around 90 million euros.

As early as the Middle Ages there were attempts to artificially manufacture or imitate the "Sapphir stone".

Synthetic sapphires have been manufactured in perfect quality, different colors and in almost unlimited sizes since 1910. For example, the now outdated trade name “Amaryl” denotes a synthetic, light green sapphire. Colorless, synthetic sapphires are sometimes marketed under the misleading trade name “Diamandite” or “Diamondite” and are used as diamond imitations.

Most of the sapphires that are commercially available as “natural” are heat-treated, with the heat treatment being used both to change the color and to increase the clarity of a sapphire. With light heat treatment, microscopic structures such as rutile needles (“silk”) are retained; when heated to a high temperature (approx. 1800 ° C) these natural micro-inclusions are dissolved and the sapphire becomes clear. If the sapphire is cooled down again very slowly, the micro-inclusions can form again. In this way, a Ti-rich, synthetic sapphire can be made into a star sapphire (or ruby). Superficial cracks or small bumps are often covered by melting borax and lead crystal glass or by treating them with oil.

Blue sapphires in particular can also be achieved using a diffusion process, the blue layer being only very thin and superficial. Since around 2000, sapphires have often been heated to 1800 ° C together with beryllium powder in order to suppress blue tones. This creates intense yellow to orange sapphires. Well-known suppliers also use treated sapphires, sometimes including the controversial diffusion treatment, but without individual declarations ( e.g. Tiffany & Co. ).

Sapphire glass (synonymous with sapphire flow ) describes flat, mostly colorless plates made of synthetic corundum . They are used, among other things, in watchmaking as watch glasses. The name is misleading as sapphire crystal is not a glass . Sapphire crystal has a crystalline and not a glass-like ( amorphous ) structure. With a Mohs hardness of 9, sapphire is the third hardest of all transparent materials after moissanite and diamond and is therefore particularly valued in this application because of its scratch resistance. Sapphire crystal is high-purity, synthetic sapphire (single crystal), which is made from molten aluminum oxide. The chemical formula is Al 2 O 3 .

Sapphire glass is somewhat less sensitive to impact than conventional quartz glass or mineral glass and has a very high level of light transmission and refraction . However, even sapphire crystal breaks sharp, hard objects under strong pressure. The popular opinion that sapphire glasses are absolutely unscratchable is exaggerated: If other very hard materials (e.g. granite ) and strong pressure (e.g. impact) act on the sapphire crystal, fine scratches can also occur here , but very rarely occurs. The abrasion of aluminum, which is incorrectly referred to as “scratches”, can often be observed when it hits aluminum surfaces. These abrasions provide a durable material bond, but can be easily removed with an eraser .

With the help of an electronic diamond testing device , as it is used for the reliable determination of naturally cut diamonds in the jewelry industry, you can reliably differentiate sapphire glass from ordinary glass due to its significantly higher thermal conductivity.

In the Verneuil process, aluminum oxide powder is melted onto a small piece of sapphire in a chamber at temperatures above 2050 ° C using an oxyhydrogen flame , so that it grows into a crystal pear 3 to 4 cm in diameter and 11 to 14 cm in length. This sapphire crystal is cut into slices using diamond cutting discs, which are then ground and polished until transparent sapphire crystal discs with a shiny surface are created. Depending on the customer's specifications, the panes are also given a polished bevel . The knowledge of the efficient production of high-quality sapphire glasses and in particular the production of the machines and equipment required for this purpose has long been a closely guarded trade secret.

Since sapphire crystal is extremely scratch-resistant due to its high hardness, it is often used in high-quality watches, but watches with sapphire glasses can also be found on the market for less than 60 euros. For a few particularly high-quality Swiss -made watch brands , the entire watch case is made of sapphire. Furthermore, there are even series-produced mechanical movements , the entire plates of which are made of sapphire crystal to give insight into the interior of the mechanics. A very small number of manufacturers and processors of synthetic sapphire glass dominate the global market, especially due to its complex processing in particularly complex shapes. Manufacturers are based in France , Switzerland, Poland and China / Hong Kong , Mauritius and Japan .

Special coatings are common for high-quality sapphire watch glasses, such as B. for anti-reflective coating to reduce light reflection. In the past, some manufacturers used to have a bluish sheen. Manufactured before 2000, these anti-reflective coatings are usually not sufficiently scratch-resistant. In recent times, however, these coatings can usually no longer be removed or rubbed off, and the recognizability of such a coating is usually only given by the effect that the viewer can no longer see any crystal. This feature is particularly pronounced in sapphire glasses with an anti-reflective coating on both sides; the viewer thinks he is looking at a clock without a glass. With a simple test, sapphire glass can be distinguished from other watch glasses. Thanks to the crystalline structure, a drop of water only rolls off the surface very slowly and without streaking when the sapphire crystal is held at an angle. In a direct comparison, the drop runs down visibly faster on mineral glass or plastic glass and leaves a thin streak.

Some manufacturers' high-priced cell phones have a cover glass made of sapphire glass. The cover glass of the liquid crystal display usually consists of special cover glass for displays (e.g. Gorilla Glass ). Sapphire glass can also be used as a scratch-resistant camera lens cover in smartphones .

Sapphires are mainly processed into gemstones . Transparent stones of high quality (as few inclusions as possible) are given a facet cut , opaque and especially those with asterism , on the other hand, are made into cabochons to emphasize the star effect.

The largest sapphire ever cut is the “Star of India” with a weight of 563.35  carats (112.67 grams). The stone found in Sri Lanka , about 2 billion years old, was donated to the American Museum of Natural History in 1901 by John Pierpont Morgan and can be viewed there.

In addition to its use as a gemstone , sapphire was used in turntables of the 1950s and 1960s as a material for the pick-up stylus, which led to the colloquial name sapphire for this stylus.

Because of its high hardness and abrasion resistance, sapphire is also used as a guide u. a. used for wire EDM and textile machines. Compared to the more solid diamond , it offers considerable cost advantages despite its shorter service life.

Doped with titanium as an active laser ion, synthetic sapphire serves as the host crystal for titanium: sapphire laser - a laser that works in the wavelength range from 700 to around 1000 nanometers .

Synthetic sapphires with a diameter of up to 75 centimeters are used for the windows of reconnaissance aircraft, anti-aircraft missiles or spacecraft that are exposed to extreme loads.

In special cases, sapphire is also used in scientific instruments in space travel, for example in the Genesis mission .

The sky blue variant is commonly associated with qualities such as calm, purity, and peace. There is no scientific evidence for the alleged physical or psychological effects. The sapphire was also mentioned in works of medieval medicine.