Moissanite , chemically also known as carborundum or silicon carbide , is a rarely occurring mineral from the mineral class of the elements. It crystallizes in the hexagonal crystal system with the chemical composition SiC and forms flat, rounded, hexagonal crystals of up to five millimeters in size. The mineral is colorless in its pure state, but due to traces of other elements such as nitrogen , boron or aluminum it shows a wide range of colors from green (nitrogen) through blue to black (aluminum, boron).

Moissanite was first detected in 1904 by Henri Moissan in a mineral sample from the Canyon Diablo meteorite found near the Barringer Crater . Its composition was first examined in 1892 by François Ernest Mallard and in 1893 by Georges Friedel ; They recognized that it contained a particularly hard material that was inert to hydrochloric acid , and initially believed this to be diamond. In 1904 Moissan was able to examine a large amount of the meteorite and recognized from the typical hexagonal crystals that the meteorite contains silicon carbide. The new mineral was named moissanite after the discoverer.

The artificial production of silicon carbide was first achieved in 1891 by Edward Goodrich Acheson (patented February 1893); moissanite in gemstone quality was first produced in 1997.

In the Dana system , it forms a separate subgroup of semimetals and non-metals. 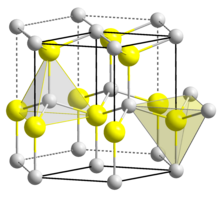 In the most common α-modification, moissanite crystallizes in the hexagonal crystal system in the space group P 6 3 mc (space group  no.186 ) with the lattice parameters a = 3.073  Å and c  = 15.08 Å as well as six formula units per unit cell . This corresponds to the wurtzite structure. Template: room group / 186

Moissanite is one of the hardest known naturally occurring substances, only diamond is harder. Like diamond, moissanite is optically transparent, but in contrast to it, it is birefringent .

Moissanite typically crystallizes in hexagonal, tabular crystals. These are flattened along the [10 1 0] plane and rounded at the corners.

The individual crystals in natural occurrences are rarely larger than 1 mm. As of 2014, a 4.1 mm long specimen found in Israel is considered the largest known natural moissanite crystal.

Silicon carbide forms at the high temperatures that occur in the Earth's mantle or when meteorites hit the earth. The α-modification initially forms at temperatures from 1900 to 2000 ° C. The formation conditions are comparable to those of diamond, so that the two minerals sometimes occur together in kimberlite , such as in Fuxian in the People's Republic of China . If the α-SiC is in contact with elemental silicon at high temperatures and if carbon dioxide is also present, the silicon can react with the carbon dioxide to form β-SiC, which attaches to the α-SiC. Other minerals except diamond, moissanite which is associated, are iron (in meteorites), quartz , garnet , clinopyroxene , Coesite , rutile , graphite, pyrrhotite and cobalt - pyrite (in kimberlite).

Locations include various meteorites, such as the Indarch meteorite in Azerbaijan , the Krymka meteorite in Ukraine and the Canyon Diablo meteorite in the US state of Arizona ; Impact craters like the Nördlinger Ries ; Volcanoes such as the Tolbachik on the Kamchatka Peninsula ( Russia ) and diamond mines, for example in Sakha (Russia) and Kimberley in Western Australia .

Using moissanite in an engagement ring

Due to its rarity, naturally occurring moissanite is not used economically. However, silicon carbide is artificially produced in large quantities from silicon dioxide and carbon . As carborundum, it is an important abrasive , but is also used as a ceramic , insulator and, due to its semiconductor properties, for light-emitting diodes , transistors and varistors .

Highly pure moissanite crystals can be used as a diamond substitute due to their comparable properties. Moissanite has a somewhat lower hardness than diamond, but is thermally more stable in air (up to 1127 ° C, diamond only up to 837 ° C) and is significantly cheaper to manufacture. It is therefore used in experiments under high pressure and high temperature.