Pyrrhotite , outdated also known as magnetic gravel , is a frequently occurring mineral from the mineral class of " sulfides and sulfosalts ". Depending on the structure type, it crystallizes in the monoclinic or hexagonal crystal system with the chemical composition FeS to Fe 11 S 12 . Other sources such as the list of minerals published by the International Mineralogical Association (IMA) also give the formula of the most widespread modification pyrrhotite-4M again with Fe 7 S 8 .

Since the iron content in the formula can vary slightly due to the structure, the generalized formula Fe 1 − x S with x = 0 to 0.17 is often given. From a chemical point of view, the mineral is therefore an iron (II) sulfide with a slight undersaturation of iron.

Pyrrhotite is opaque in every form and develops mostly tabular, pyramidal or prismatic crystals , but also massive aggregates from bronze-yellow to tombac-brown in color with gray-black streak color . In the air, pyrrhotite quickly turns a dull brown, rarely also iridescent colored .

Originally, the mineral was mainly as a magnetic gravel (short pyrrhotite known) as well as in the mineralogical records of Abraham Gottlob Werner can be found 1789th Ernst Friedrich Glocker also referred to it as magnetopyrite in 1839 . Corresponding modifications of these old names can be found in other languages, for example in France ( Fer sulfuré magnetic ), England ( Magnetic sulfuret of iron ) and Spain ( Pyrita magnetica ).

The name pyrrhotite, which is still valid today, was given to the mineral in 1835 by August Breithaupt , who named it after the Greek word πύρρος ( pyrrhos ) for "fire-colored".

In the Lapis mineral directory according to Stefan Weiß, which, out of consideration for private collectors and institutional collections, is still based on this old form of Karl Hugo Strunz's system , the mineral was given the system and mineral number. II / C.19-20 . In the "Lapis system" this corresponds to the section "Sulphides with [the molar ratio ] metal: S (sulfur), Se (len), Te (llur) ≈ 1: 1", where pyrrhotite together with achávalite , heideit , jaipurite , Modderit , Smythit , Troilit and Westerveldit form an independent but unnamed group (as of 2018).

The 9th edition of Strunz's mineral systematics , which has been in effect since 2001 and was last updated by the IMA in 2009, classifies pyrrhotite in the category of “metal sulfides, M: S = 1: 1 (and similar)”. However, this is further subdivided according to the predominant metals in the compound, so that the mineral can be found according to its composition in the sub-section "with nickel (Ni), iron (Fe), cobalt (Co) etc.", where it is named the "pyrrhotic group" with the system no. 2.CC.10 and the other members Smythit and Troilit.

The systematics of minerals according to Dana , which is mainly used in the English-speaking world , assigns the pyrrhotite to the class of "sulfides and sulfosalts" and there in the department of "sulfide minerals". Here it can be found together with smythite in the unnamed group 02.08.10 within the subdivision of "Sulphides - including selenides and tellurides - with the composition A m B n X p , with (m + n): p = 1: 1" .

Six different polytypes are currently known of pyrrhotite, including troilite, recognized as an independent mineral with the ideal composition FeS and hexagonal symmetry : The hexagonal high-temperature modifications of pyrrhotite are only stable above 300 ° C.

With the exception of the troilite, which is found almost exclusively in meteorites , all other polytypes of iron (Fe) are understaffed, which is due to vacancies in the crystal lattice .

Pyrrhotite is mostly ferromagnetic . In front of the soldering tube , it melts to a black magnetic mass and is only sparingly soluble in nitric acid and hydrochloric acid. 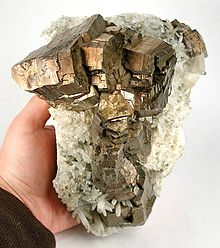 Pyrrhotite from the "Santa Eulalia Aquiles Serdan Mine", Chihuahua, Mexico

Pyrrhotite is mainly formed by liquid magma in intramagmatic sulphide deposits and in sulphide- bearing pegmatites , where it usually occurs in paragenesis with other sulphides such as chalcopyrite , marcasite , pentlandite and pyrite .

As a secondary part, pyrrhotite is also found in basic-igneous, more rarely acidic rocks as well as in stone and iron meteorites .

In addition, pyrrhotite is also formed in the hydrothermal post-phase of pneumatolytic displacement deposits and other hydrothermal ore deposits with a higher formation temperature. In addition to chalcopyrite and pyrite, there are also galena , iron-rich sphalerite , arsenopyrite and antimonite as accompanying minerals. In rocks of the Katazone that have been transformed regionally metamorphically , pyrite is usually converted into pyrrhotite.

In contrast, pyrrhotite is rarely found in sediments and sedimentary rocks , as it is easily decomposed in their oxidation zone .

As a frequent mineral formation, pyrrhotite has already been detected at over 6600 sites (as of 2012). Large deposits of industrial importance include Greater Sudbury (Ontario) in Canada and Talnach (English Talnakh ) in Russia.

Most famous for their extraordinary pyrrhotite finds are Trepča in Kosovo and Dalnegorsk in Russia, where tabular crystals up to 30 centimeters in diameter have been found. At Santa Eulalia (Chihuahua) in Mexico, crystals up to 15 centimeters were found, and at Chiuzbaia ( Baia Sprie ) and Cavnic in Romania, crystals between 11 and 15 centimeters were found. Other well-known sites with good pyrrhotite finds, mostly several centimeters in size, include the “Morro Velho Mine” near Nova Lima ( Minas Gerais ) in Brazil and the “Blue Bell Mine” in the Canadian province of British Columbia .

In Germany, the mineral has so far been found in many locations in Baden-Württemberg (Black Forest, Kaiserstuhl, Kraichgau, Odenwald) and Bavaria (Bavarian Forest, Fichtelgebirge, Upper Palatinate), near Niederlehme in Brandenburg, in many places in Hesse (Dillenburg, Fulda, Odenwald ), near Adelebsen , Peine and in the Harz in Lower Saxony, in many places in North Rhine-Westphalia and Rhineland-Palatinate (Eifel, Sauerland, Siebengebirge, Siegerland), near Reimsbach in Saarland, near Gernrode , Neudorf , Stolberg and Tarthun in Saxony-Anhalt , in many places in Saxony (Ore Mountains, Schwarzenberg, Upper Lusatia, Vogtland), on the Kammberg near Joldelund in Schleswig-Holstein and near Drosen and Loitsch in Thuringia.

In Austria, pyrrhotite occurred mainly in Carinthia and Salzburg in the areas around Friesach - Hüttenberg , the Hohe Tauern , Gailtal Alps , Carnic Alps , Gurktal Alps and the Koralpe . Furthermore, it was also found in Burgenland on Pauliberg and near Bernstein , at several sites in Lower Austria such as in the Waldviertel , Styria (Fischbacher Alpen, Koralpe), in North and East Tyrol , in Upper Austria (Mühlviertel, Windischgarsten) and in Vorarlberg ( Unterklien , Montafon).

In Switzerland, the mineral was found at several locations in the cantons of Bern , Graubünden (Vorderrheintal), Ticino (Lago Maggiore, Maggiatal), Uri (Reuss valley) and, above all, Valais (Binntal).

Pyrrhotite could also be detected in some mineral samples from the Mid-Atlantic Ridge , East Pacific Ridge and the Red Sea (Atlantis II Deep) as well as in the comet dust of Wild 2 .

Pyrrhotite is occasionally used as iron ore when locally accumulated , but more commonly used in connection with pentlandite than nickel ore . In addition, pyrrhotite is occasionally used as a raw material for the production of polishing red , a well-known, still valued means for the fine polishing of metals and glasses, as well as for the production of iron vitriol .