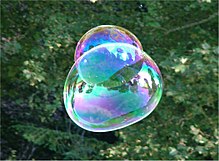 Iridescence (from ancient Greek ἶρις ĩris ' rainbow ') is an optical phenomenon, whereby a surface appears in different colors depending on the perspective.

Because of the refraction and interference of light on thin surface layers of an object, this object appears in the colors of the rainbow . The colors depend on the viewing angle. Iridescence is known from pearl oysters and soap bubbles . Because of the intense colors, iridescence is often perceived as beautiful .

Because of the dependence on the viewing angle, iridescence cannot be completely captured with conventional photography , but only with holography .

In biology , iridescence is widespread in plants and animals. The phenomenon is aggravated by wetness. Bird eggs can also become iridescent.

In meteorology , one speaks of iridescent clouds and mother-of-pearl clouds when clouds light up in mother-of-pearl colors. The iridescence takes place here through interference. The colors depend on the size of the droplets or ice crystals and the way in which the light falls.

Gemstones , the iridescence of which is well pronounced, are very popular. Cracks, cracks or the formation of twins create a more or less regular layering of the material on which the incident light rays refract and overlap. Labradorite shows a particularly distinctive, iridescent play of colors with a metallic sheen , and this optical effect is also referred to as “labradorization”.

Synthetically produced iridescent paints to which pearlescent pigments have been added are used, among other things, as printing inks for the production of effective stickers and as effect paint in the automotive industry. 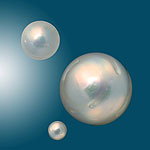 A special form of iridescence is the pearlescent luster (short: pearlescent ) or luster , named after the silky, rainbow-colored luster of the pearls . Here, too, the regular, concentric layering of the mother- of- pearl is responsible for the iridescence.