Color arises in the human and animal visual organ as color valence when a color stimulus , that is light with wavelengths between 380 and 780 nm and with a spectral intensity distribution , excites the cones according to their perception spectrum. Here it is explained how this spectral distribution can arise. This applies analogously to all electromagnetic waves .

Colors of even luminous objects

The light required for recognizing color can come directly from various types of "spotlights".

In atoms or molecules which are electron by supplying energy excited and treated as in a state of higher energy. After a short time, the excited electron falls back into a state of lower energy and releases the energy it previously received in the form of a photon . The same applies to conformational changes and transitions between vibrational and rotational states of molecules that are associated with energy absorption or release.

According to the quantum hypothesis , the higher the energy difference of the electron jump , the greater the frequency of the photon. This means that the emitted radiation is the shorter the wave. If its wavelength is in the range of visible light , i.e. between approx. 400 nm and 800 nm, you can see the body glow. Electronic transitions between inner shells are typically so energetic that the resulting radiation is in the X-ray or UV range and is therefore invisible. Transitions between oscillation and rotation states are in turn so low in energy that the radiation here lies in the equally invisible IR or microwave range. Visible colored light is created primarily at transitions in the outer atomic shell.

Since the electrons of an atom cannot assume any, but only very specific energy states, only very specific amounts of energy ( quanta ) and thus very specific wavelengths are emitted. The result are so-called spectral lines, the monochromatic (single-colored) light of which is perceived by humans as one spectral color .

This effect can be followed, for example, in spectral analysis or in a demonstration experiment on a gas stove. Here sodium chloride is brought into the flame. Their heat excites electrons in the outer shell of the sodium atoms. When these electrons return to their basic state, they emit a photon in the area of ​​orange light. You can also see this color effect on street lights with sodium vapor lamps. In LEDs , the electron jump does not take place between the energy levels of individual atoms, but between the bands of the semiconductor . The band gap is decisive for the color of the emitted light . However, the principle remains the same.

McCree curve of sunlight on a clear sky

There is not just the emission of monochromatic lines. All bodies emit thermal radiation through the thermal movement of their particles, the spectral distribution of which depends on the temperature (see Planck's law of radiation ). Here, too, the energy is released in the form of discrete energy quanta. Because of the unmanageably large number of different states of motion, the overall result is a continuous spectrum that shows a bell-shaped curve: because of their relatively low energy, large wavelengths contribute little to the spectrum. Very high-energy transitions are unlikely for thermodynamic reasons. In between there is a maximum of the radiation power, the wavelength of which depends on the temperature: the hotter the radiator, the shorter the wave (see Wien's law of displacement ). If heat radiation is mainly transmitted in the infrared at room temperature, the radiation maximum shifts with increasing temperature from red through yellow and white to blue. This is where the color impressions come from: red glowing charcoal, “yellow” candlelight, the white of sunlight, the “glaring white” of an electric arc, etc.

Effective spectrum of a quartz-halogen lamp

If the light of such hot light sources is broken down by a prism or a diffraction grating , one sees a continuous spectrum with all colors. Sunlight has an approximately continuous spectrum with a maximum at 500 nm corresponding to a surface temperature of approx. 6000 K. However, individual spectral lines are missing because they are absorbed by the solar atmosphere (see Fraunhofer lines ).

The light necessary for the recognition of color can also be perceived indirectly when it is reflected or transmitted by bodies. Its spectral composition changes in the process.

Many bodies "have" their own color by nature (green plants, red blood, different colored flowers, red or brown earth). Other bodies have been purposely given a desired color. Examples of this are any textile dyed with a dye , a painted car or a painted house.

In these cases only part of the light that falls on the colored bodies is reflected again. The spectral composition of the reflected light is changed compared to the lighting and thus arouses a certain color impression when looking at the body.

The spectral composition of the scattered light is not the same in all scattering directions. The scattering depends strongly on the ratio of the particle size to the wavelength. In milky media (such as frosted glass, opal, dusty air) the longer waves are less scattered than the shorter ones. That is why such media appear yellow to red in transmitted light and rather blue in scattered light. An example of this is the blue of the sky and the red of the sunrise or sunset. 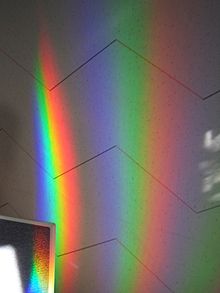 When the light beam passes through an interface between two optically transparent media with different refractive indices , it is deflected by the difference in the speed of light. Light of different wavelengths is refracted to different degrees, since the speed of light in dense media depends on the wavelength. Polychromatic (multicolored) light of different wavelengths (according to the different perceived colors) is deflected differently. This leads to a spectral splitting, known as dispersion . The best known example is the rainbow. 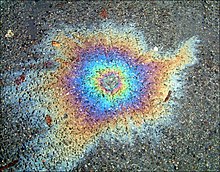 In the case of interference, light waves are split into two parts at thin layers, which interact with each other to intensify or extinguish. Depending on the layer thickness, the extinction takes place at different wavelengths. This changes the spectral composition of the incident light, and the reflected or transmitted light creates a color impression. Typical are the colored rings of drops of oil spread over water or moving streaks on soap bubbles . The interference colors of the wing feathers of hummingbirds and peacocks or the wing scales of butterflies are very nice examples.

Structural colors are special interference colors. They arise when regular fine structures lead to diffraction interference between the reflected or passing light waves. The visible colors depend on the angle of incidence of the light and the viewing direction. Examples are the “shimmering” CDs or surface holograms . The shimmering surfaces of some insects such as beetles and butterflies as well as those of bird feathers are colored in this way.