Light color is the color of a self-illuminating light source . The light that is (partially) reflected by an illuminated body is called body color . Colored light can also arise from absorption , scattering , diffraction or even dispersive refraction .

The color stimulus is based on the spectral composition of the light. It is composed either of discrete individual spectral colors of certain wavelengths, of a light mixture of several wavelengths or wavelength ranges or of a continuous spectral range. The intensity distribution over the wavelengths of the (visible) spectrum is characteristic of the light source. The light color can be changed by filtering. In connection with the photoreceptors in the eye and the processing in the nervous system, every light color has a certain characteristic, the color valence . A measurement of the color valence is based on the physiological perception properties of the human visual system.

Continuous light emission due to the temperature of a radiator 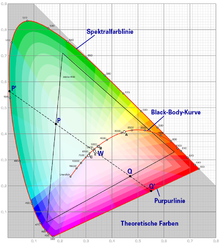 As the color temperature rises, the associated white points lie on a curve

Light can have a continuous spectrum if, like sunlight or the light of an incandescent lamp , it emanates from a glowing body. Such a spectrum essentially follows Planck's law of radiation . The light color is determined by the wavelength of the maximum of the continuous spectrum. A corresponding color temperature ( T CP ), expressed in Kelvin (K), can be assigned, which is equal to the temperature of the radiating incandescent body. Such radiation begins immediately above absolute zero with thermal radiation in the far infrared . The higher the temperature rises, the shorter wavelengths are also emitted and the bluer the maximum becomes. As a result, a glowing hotplate appears red, candlelight yellowish, sunlight white and 10,000 K hot plasmas or fixed stars appear bluish.

Other light sources generate light through electron transitions between energy levels in the electron shell of atoms. Due to the quantization of the energy differences, their emission spectrum is a narrow-band line spectrum (see also gas discharge ). Fluorescence in solids or the emission of hot, dense plasmas produce broader bands. The perceived color is that of a single dominant line or band or it is formed from several lines or bands through additive color mixing . Examples are lasers , fluorescent substances in monitors , light-emitting diodes , mercury vapor lamps or sodium vapor lamps . Spectral lamps can emit narrow-band, very wavelength-stable spectral colors.

Light sources with multiple emission lines or emission lines that are broadened by high pressure can emit light that appears white ( xenon high pressure lamps , metal halide lamps ). Another possibility of generating white light is used with fluorescent tubes , in that the ultraviolet radiation that dominates a mercury vapor low-pressure discharge is converted into missing spectral ranges by fluorescent substances.

Light colors are perceived subjectively, but can be measured as color stimuli by color sensors . Such a color valence arises from the light from light sources through additive color mixing and in the case of body colors through subtractive color mixing . The color valence (color) green of the vegetation is based on the fact that the chlorophyll photochemically absorbs the purple light component.

Identification of the light color

The light color is a parameter to characterize light sources. In particular, fluorescent lamps are divided into the following three groups for comparison with incandescent lamps :

Technically, light color is the specification of the color of a comparable lamp . If there is no continuous spectrum of the light source, additive color mixing or a suitable selection of the phosphors must be used to produce the light color white. A light color can get through

The color of the light means the spectral composition of the light. The white light of a black body is determined in the chromaticity diagram by the white point .

To the colorimetry and the color management to create comparable conditions, light colors were normalized. Another application of such classifications for light colors are the types of lighting in the case of the standard color space in order to obtain definable (comparable) light conditions for color information on body colors.

The light from lamps of the same light color can have different spectral compositions: metameric light then appears the same color on white surfaces, but differences can occur on colored surfaces. Therefore one cannot infer the exact or identical color rendering from the light color of a lamp alone.

In the case of a monitor or television, from the three light colors (red, green and blue), only the color space that lies within these three basic colors ( color triangle) can be reproduced . Various such color spaces have been defined so that the reproduced colors depend on the settings when recording an image as well as the settings of the display device. If these deviate from one another, there will be color shifts.

Illuminants and their use 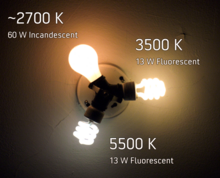 With fluorescent tubes, the fluorescent substances on the inside of the glass tube determine the light color. Almost any color stimulus can be generated, but it can also be changed by colored (lamp) glass or added filters. The reflectors of cold-light mirror lamps , for example, allow the red and infrared components of the incandescent lamp to pass through and thus generate a thermally colder light beam with less heat radiation. Fluorescent lamps that appear white are often achieved with several layers of fluorescent material; the wider the band, the more pleasant it is felt. The light generated in this way consists of individual spectral ranges and not, as with a glowing filament, of a continuous spectrum, whereby the filament comes close to the distribution of the Planck black body.

Light sources that appear almost white cause color distortions that deviate from the impression of daylight if they have a discontinuous spectrum. The quality of the color rendering of a light source is described by the color rendering index ( Ra ). The value 100 corresponds to the quality of a good incandescent lamp and represents the maximum achievable value. A high color rendering index must be ensured if the colors of illuminated objects are to be perceived unadulterated. The Ra index should not be below 80 indoors.

Color temperature according to Planck's law of radiation, scaled via energy

827 denotes warm white (= 2700 Kelvin) lamps with average color fidelity (= 80… 89), as is mostly offered in Europe, while in the USA 830 (= 3000 Kelvin) is also sold as warm white. The human color perception of an 830 corresponds more to that of a very bright incandescent lamp , while that of an 827 is often perceived as less bright and more greenish . Halogen bulbs have a light color between 2800 K and 3500 K, depending on their design and output, and can be the reason for a subjective color perception that deviates slightly from the usual color temperature. 840 (i.e. 4000 K) is recommended as ( neutral white ) for offices and workplaces. It is less tiring and forms a pleasant compromise day and night if the light intensity in the room is adjusted. The contrast of the usual black writing on a white background can also be subject to the light color. In indoor spaces, illumination with 4000 Kelvin is hardly perceived as annoying and is often not noticed at all. The provisions for workplace lighting are regulated in DIN EN 12464-1: 2011.

The daylight variants (850, 865), also called cool-white (cold white) and day-white (day white ), are recommended for combination with daylight, as is necessary for lighting business premises. If large glass surfaces let a lot of daylight into the room or steamed glass panes strongly dampen the red components in daylight, this light color is recommended to avoid annoying color shadows. It can also be useful for night work, because the high blue content simulates daylight for the body (and thus produces less melatonin ).

The digit codes according to ILCOS are, depending on the manufacturer, better suited for evaluating the lamps than the information in text form, which sometimes serves marketing rather than objective comparability. Some manufacturers describe 4000 K as cool-white , others 3000 K as neutral white. The better color rendering of the 9xx examples of the fluorescent lights is more complex to produce because of the larger number of fluorescent layers and is therefore more expensive; this means that the lights are somewhat less efficient in terms of their light output ( lumens per watt ).

During the day, sunlight with a high light intensity prevails, the night is tied to the much lower light intensity of the illumination by the moon. Between day and night, the light color also changes according to the natural rhythm of the day. Blue light can lead to a reduction in the release of melatonin , and such cold light can have an encouraging and invigorating effect, while warm light (reddish / yellowish, also warm tones) has a cozy and dampening effect. Therefore, cold light is consciously used in light therapy against winter depression; Such light with a high color temperature is now increasingly being used in workplaces.

For a long time, artificial lighting with color temperatures below 3000 Kelvin was known as artificial light ( warm white ) using pine chips, oil lamps or incandescent lamps , while natural daylight has color temperatures above 5500 Kelvin. With the further development of light sources, the latter is now becoming the light color ( daylight ). On the other hand, the light color used should be accompanied by a certain illuminance in order to generate a positive psychological effect. With newer lamps there is also a connection to the quality of the light color: the better the color rendering, the lower the light output per watt. So-called full-spectrum daylight lamps ( daylight de luxe ) have also been available since the 1990s , which provide almost continuous light similar to daylight and which are advertised as being health- promoting . The higher price is explained by the use of five or more instead of three phosphors in the older lamps. On the other hand, the effect on the internal clock (via the light-dependent melatonin release) can be undesirable. For example, 6500 Kelvin (lamp color: 965) could cause sleep problems during evening computer use like daylight. In order to document the relationship between light intensity and light color for technical use, there are several standards and recommendations from DIN and VDE that are tailored to special working and living situations .

“[So ...] no light sources with a high color temperature should be used for low lighting levels, otherwise the impression of twilight or moonlight is created, which impairs the enjoyment of work and comfort. The effect is essentially due to the chromatic aberration of the eye. "

The effect of full-spectrum lamps (incandescent lamps, five-band lamps, de-luxe lamps) compared to the simple three-band lamps with poorer color rendering (mercury vapor lamps with simple fluorescent coatings, sometimes also simple five-band lamps) is not based on the direct influence of the light color via the eye's cone system , but about the changed color stimulus of the surrounding body colors .