Laser diode in a 5.6 mm housing, as is used in CD drives , among other things (size comparison: US 1 cent coin )

In laser diodes, a pn junction with heavy doping is operated at high current densities. The choice of semiconductor material determines the emitted wavelength , which today covers a spectrum from infrared to ultraviolet . 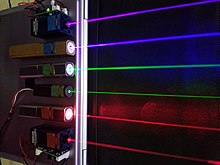 The idea of using a semiconductor diode as a laser was pursued by various physicists after the first lasers appeared in 1960 and even before that. In the early 1960s, several laboratories competed to build the first semiconductor laser: Robert N. Hall from General Electric ( Schenectady ), Nick Holonyak from General Electric ( Syracuse ), Marshall Nathan from IBM and Robert Rediker from the Lincoln Laboratory of the Massachusetts Institute of Technology (where the development was under the direction of Benjamin Lax ). They were based on gallium arsenide and had in common that they were still inefficient, only ran in pulse mode and only operated when cooled with liquid nitrogen. In September 1962, Hall's team managed to get the first semiconductor laser up and running by a narrow margin (in the infrared at 850 nm, Holonyak shortly afterwards demonstrated the first semiconductor laser in the visible light range). In Russia this was achieved in 1963 by a team under Nikolai Basow . Practical semiconductor lasers only emerged after Herbert Kroemer in the USA and Schores Alfjorow and Rudolf Kasarinow in the Soviet Union ( Joffe Institute ) proposed the use of thin layers in a sandwich arrangement ( heterostructures ) in 1963 (Alfjorow and Kroemer received the Nobel Prize in Physics for this in 2000 ). Here, too, there was a race between Russians and Americans, in 1970 teams at Bell Laboratories ( Morton Panish , Izuo Hayashi ) and the Joffe Institute (Alfjorow) made continuous semiconductor lasers run at room temperature, although the Joffe Institute was a little earlier got there. 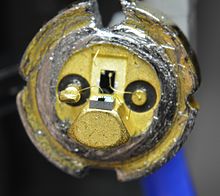 Cut open housing of a laser diode. The actual laser chip is the small black block in the foreground (edge ​​emitter). The photodiode, for measuring the output power, is the larger black block on the bottom of the housing.

The emission of light results from the recombination processes of electrons and holes at the transition between the p- and n- doped area. The end faces of the component are partially reflective and thus form an optical resonator in which a standing light wave can form. If there is a population inversion , the stimulated emission can become the dominant radiation process. The laser diode then emits laser radiation.

The generation of the population inversion takes place in laser diodes by electrical pumping, an electrical direct current in the forward direction ensures a constant supply of electrons and holes. The pumping current at which the laser starts operating is also referred to as the laser threshold or threshold current I th (from threshold ).

Most laser diodes are edge emitters (English edge emitter ), d. That is, the light leaves the crystal at its break edge close to the surface across the stream. The power loss, 30% to 80% depending on the wavelength, heats the crystal and must be dissipated by suitable cooling. Heat sinks are used for medium outputs (500 mW), heat pipes and liquid cooling are used for higher medium outputs .

The risk of overheating is a limiting factor for the achievable radiation output per individual emitter. In order to achieve a higher output, several diodes lying next to one another are operated electrically in parallel in a strip-shaped chip. By combining the individual beams, a higher overall performance can be achieved. Such an arrangement of a plurality of juxtaposed diodes on one chip is referred to as bars (English bar hereinafter). The 10 to 25 individual emitters of a bar behave electrically in the same way due to the common manufacturing process and can therefore be operated in parallel like a larger diode. With currents of up to 80 A, optical powers of up to 100 watts in the near infrared are achieved .

Stacks composed of several such bars and diode lasers made from them achieve outputs in the kilowatt range. Surface emitters ( VCSEL ) have lower powers, but a better beam quality.

State of the art

The efficiency of a laser diode is defined as the ratio of the radiated power to the power consumed. The indication of the light output makes little sense for diodes that also emit radiation in the invisible infrared or ultraviolet range.

The achievable efficiency in 2011 was between 10% (green, 530 ... 540 nm), 20% (blue, 440 nm) and 70% (red and infrared, from 650 nm). In 2012, blue laser diodes achieved 27% with a power consumption of 1.4 W in a TO-56 housing (5.6 mm) with a service life of 10,000 hours. The production of suitable InGaN semiconductor materials for green lasers that can withstand high current density is still problematic. For lighting purposes it is therefore more economical to excite suitable phosphors in the longer-wave range with short-wave blue light .

In recent years it has been possible to produce powerful, monolithic white lasers .

Internal wiring of a laser diode combined with a photodiode

Electrically, laser diodes behave like light-emitting diodes and must therefore be operated with current. Operation at constant voltage is not possible. The U / I characteristic curve is exponential like that of a semiconductor diode . The laser operation begins from a characteristic current in the direction of flow, the threshold current . Below this current, the laser diode emits incoherent radiation similar to a light-emitting diode. From the threshold current, the optical output power of the laser diode is strictly proportional to the current. The proportionality factor is called slope efficiency ; it is given in watts per ampere.

Laser diodes are often housed together with a photodiode in a common housing.

The photodiode, in this case also referred to as a monitor diode, is optically coupled to the laser diode. It serves as a sensor in a control circuit to keep the optical power of the laser diode constant by means of an external electronic circuit.

Due to the additional photodiode, the housings of laser diodes, as used in CD players and laser pointers , have three connections, as shown in the adjacent figure using an exemplary electrical configuration of the two diodes.

Laser diodes only tolerate low blocking voltages in the range of 3 ... 5 V. Furthermore, they are sensitive to electrostatic discharges and are usually short-circuited for transport. During handling and installation, protective measures must be taken to prevent electrical voltages between the connections.

Depending on the type of diode, the emitted light output is a few hundred microwatts to over 10 watts per individual emitter. The current required for this is approx. 0.1 ... 12 A per emitter, the voltage for infrared laser diodes is 1.8 ... 2.2 V. In pulsed operation (so-called q-cw operation ) achieve even greater achievements. The modulation frequencies can be up to 10 GHz.

Laser diodes can work both in multi-mode operation (laser light from several different oscillation modes simultaneously) and in single-mode operation (only one oscillation mode). If single-mode operation is necessary for an application, this can be done by structuring the semiconductor material, as with DFB ( distributed feedback laser ) or DBR ( distributed Bragg reflector laser ) laser , or by an additional external resonator external cavity diode laser , ECDL) are obtained: As with other lasers may extend over the length of the active semiconductor addition, in laser diodes, the optical resonator, however, the length can be small due to the divergence, complication is the high refractive index of the semiconductor material , which already leads to a high reflection at its exit surface.

The frequency of the light emitted by the laser diode depends not only on the material but also on the temperature, the pump current and, if necessary, the optical feedback through an external resonator. By stabilizing these parameters, a bandwidth of the emitted light of less than one megahertz can be achieved.

The pumping also causes a periodic change in the refractive index in the semiconductor material, as this is strongly dependent on the charge carrier density. The change in the refractive index corresponds to a variation in the optical length of the resonator while the geometric length of the resonator remains the same. Thus the wavelength changes, i.e. that is, the laser changes its emission wavelength.

Heating the laser leads to changes in wavelength. The shift is about +0.25 ... 0.3 nm / K, the maximum of the radiation shifts when heated by reducing the band gap towards longer wavelengths.

The fracture surface ( facet ) is extremely sensitive to contamination, since there are very high radiation flux densities in the area of ​​the radiation exit from the narrow active zone. Excessively large current impulses can lead to optically induced thermal destruction of the facet even without contamination. This type of destruction is known as COD ( catastrophic optical damage ).

Laser diodes are now available for a variety of wavelengths between blue-violet (405 nm) and medium IR (14,000 nm). There are weaknesses in the green to yellow range between 510 nm and 635 nm. Only low output powers are possible there. 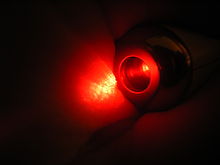 The standard wavelengths of semiconductor lasers and their applications are:

Other general areas of application are: