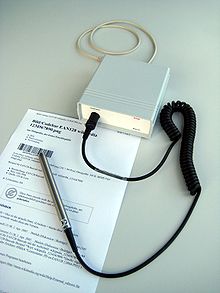 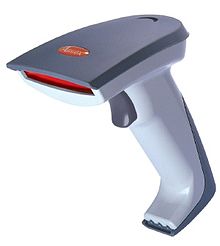 A barcode reader is a data acquisition device that can read and forward various barcodes . The recognition of these barcodes is done purely optically either with red or infrared light . Each barcode reader consists of the actual reading unit and the downstream decoding unit. While these are usually two devices with reading pens (there are also reading pens with an integrated decoder), the decoding unit is integrated in the reading unit in almost all other device types. Almost all types are now available on the market as stationary, wired hand-held scanners or as mobile recording devices (e.g. inventory terminals with integrated barcode scanners).

The reading pen is moved directly over the barcode by hand. A light source, usually a light-emitting diode , and a light-sensitive sensor are housed in its optical tip . The light from the light emitting diode is reflected to varying degrees by the lines and gaps in the barcode. A decoder receives these different light / dark signals, deciphering the barcode and transmitting the useful information it contains to the downstream system (e.g. PC, cash register, etc.). A movement across the barcode that is as uniform as possible in terms of direction and speed is necessary in order to be able to decode the signal without errors. While the actual technology of capturing light and dark reflections has remained the same, reading pens have hardly been used or only in very specific applications since the end of the 1990s because of their disadvantages.

Barcode card readers are often used for inexpensive access control or time recording systems. In order to protect the barcode from simple copying and thus give the cards a certain degree of protection against forgery, the barcode can be covered with special plastic films that are only permeable to infrared light so that it is not visible to the naked eye or with a copier, but can be read with an IR reader.

With the CCD scanner, a very flat line section of the barcode is scanned in its entire width at once. For this purpose, the code is illuminated by light emitting diodes. The barcode reflects on a CCD or photodiode line , depending on whether it is light or dark . A decoder uses this to decipher the lines and gaps in the barcode and thus the information contained therein. The distance from the barcode may be a few centimeters up to about half a meter, depending on the LED strength, optics ( depth of field ), size of the barcode and the ambient light.

One or more laser beams are directed onto the barcode and guided over the barcode in lines at high speed using an oscillating mirror, a mirror wheel or other optical systems. The light that is reflected more or less by the light and dark lines from the barcode is then captured by optics and converted into electrical signals by means of a photodiode and evaluated.

With simpler laser scanners, the point of light scans the barcode at the same angle. For complete detection of the barcode, its lines must therefore be at an angle of approx. 90 ° to the reading direction or be aligned accordingly by the operator. A single line scan line is created for the viewer.

Laser scanner with a linear grid

The linear grid is achieved by slightly offsetting the light point, which oscillates from left to right, in a vertical direction. The system does this automatically and at high speed. For the viewer, a field is created from several parallel lines. This technique increases both the size of the scan area (precise aiming becomes less important) and the tolerance against minor damage in the barcode (since these are less significant or can be reconstructed due to the variation of the section).

Offset or rotating mirrors or prism systems generate grid lines, i.e. several lines that sweep over the reading field at mutually offset angles. In this way there is no need to align the barcode, since as a rule five different scanning directions arranged in a circle allow the barcode to be aligned at any angle to the direction of the light spot. For the viewer, a grid of many overlapping, circularly arranged lines is created.

With this further development of the omnidirectional scanning technology, the rapid rotation of the entire scan field around its own center creates a reading area that is swept over by the light point of the laser beam in almost every angle in a very short time. In this way, the entire barcode is captured without missing any relevant areas. Torn or damaged barcodes can be reconstructed even better by the decoder software, and the capture is even faster because the barcode is recognized almost immediately.

The information from the reflected beam can also be combined in the decoder and thus capture the entire content of the code. A quality feature of a laser scanner is its scanning speed, that is, how often the point passes over the barcode in one second. Depending on the requirements of the scanner, this frequency can be between a few dozen and many thousands of Hertz.

With laser scanners, the maximum distance between the barcodes to be read can be 10 cm, 15 cm or several meters (with totally reflective barcodes). Such scanners are used e.g. B. in high-bay warehouses to read barcodes from forklifts. However, the barcodes must also have an unusually large size.

The latest generation of barcode scanners is known as “imagers”. You capture the barcode with the help of a small camera. Then the recorded image is processed by digital image processing and the barcode is digitally recorded. 2D image scanners and CCD scanners use a comparable technique for capturing and decoding the image, with a 2D image scanner not only capturing one, but several (many) lines of the presented image at the same time. It is thus possible to arrange the information on a two-dimensional surface and to capture it in one step. Thanks to the integrated camera, imagers can also be used to capture documents or ID cards. B. at the cash register significantly expanded functionality. In addition, with the help of digital image processing, it is also possible to use camera cell phones as reading devices, especially for 2D codes. Since 2D codes represent a relatively large amount of information in a small area, smaller files can also be transmitted in this way (e.g. sound snippets, advertising messages or extended product information). For cost reasons, monochrome photo sensors (CMOS, CCD, etc.) are often used in camera scanners, with which only black and white recordings can be made. Systems with a color camera are also available.

Another new generation are so-called cell phone scanners. There are a number of applications for mobile telephones that enable 1- or 2-dimensional codes and barcodes to be captured with the digital camera of the mobile telephone and further information to be displayed to the user. In addition to the cell phone camera, an image processing application is required on the cell phone that is responsible for evaluating the camera images. One example is the Barcoo app , which, among other things, uses the barcodes of food products to display the associated nutritional information in traffic light form ( food traffic light ).

The decoded data can then be passed on to the higher-level system via various interfaces.