Cordierite , outdated also known as dichroitic or iolite , is a seldom occurring mineral from the mineral class of "silicates and germanates". It crystallizes in the orthorhombic crystal system with the idealized chemical composition Mg 2 Al 3 [AlSi 5 O 18 ] and is therefore, chemically speaking, a magnesium - aluminum silicate. Strunz's classification of minerals assigns cordierite to ring silicates , but according to its structure, cordierite is a framework silicate .

Cordierite is the magnesium analogue of secaninaite (Fe 2 Al 3 [AlSi 5 O 18 ]) and forms a complete mixed crystal row with it . Therefore, the mixed formula (Mg, Fe) 2 Al 3 [AlSi 5 O 18 ] is often given for cordierite , whereby the elements magnesium and iron in the formula can represent each other ( substitution , diadochie ), however are always in the same proportion to the other components of the mineral.

Cordierite rarely develops well-formed, short to long prismatic crystals in nature . It is mostly found in the form of granular to massive aggregates . However, crystals up to half a meter in length have already been found. Undamaged crystal surfaces have a glass-like gloss , whereas fractured surfaces have a more fat- like gloss .

The predominant color of cordierite is deep blue to blue-violet, but it rarely occurs in greenish, yellowish-brown, gray or light blue colors. Even colorless cordierites are known.

With a Mohs hardness of 7 to 7.5 cordierite is one of the hard minerals that as the reference mineral quartz (7) are able, glass to scratch.

The mineral was already known to Abraham Gottlob Werner (1749–1817) and was given the name Iolite - from the Greek ἴον [ion] for violet and λίθος [lithos] for stone, together so "violet stone" - due to its blackish-blue, violet playing color that reminded Werner of a violet.

The French mineralogist Louis Cordier (1777–1861) gave the mineral the name Dichroit in 1809 ("the double-colored"; see Description du dichroite , published in 1809). Since the property of the mineral is actually a pleochroism , it was renamed cordierite by JAH Lucas in 1813.

The following synonyms for cordierite are also in circulation, some of them misleading:

The type locality is Bodenmais or the nearby Großer Arber in the Bavarian Forest.

In the meanwhile outdated, but still in use 8th edition of the mineral classification according to Strunz , cordierite belonged to the mineral class of "silicates and germanates" and there to the department of " ring silicates (cyclosilicates)", where together with bazzite , beryl , indialite , pezzottaite , Sekaninait and Stoppaniit formed the unnamed group VIII / E.12 .

The 9th edition of Strunz's mineral systematics , which has been in effect since 2001 and is used by the International Mineralogical Association (IMA), assigns cordierite to the class of “silicates and germanates” and there to the section of “ring silicates (cyclosilicates)”. However, this section is further subdivided according to the structure of the rings, so that the mineral can be found in the sub-section "[Si 6 O 18 ] 12− -six-simple rings without island-like, complex anions", where it can only be found together with secaninaite the "cordierite group" with the system no. 9.CJ.10 forms.

The systematics of minerals according to Dana , which is mainly used in the English-speaking world , assigns cordierite to the class of "silicates and Germanates" and there in the section of "ring silicates: six rings". Here it can be found together with Sekaninait in the "Cordierite Group" 61.02.01 within the subdivision of " Ring Silicates : Six Rings with Al-Substituted Rings ". 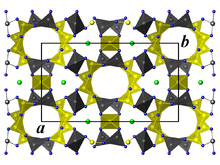 The crystal structure of cordierite is similar to that of the 6-ring silicate beryl (Al 2 Be 3 [Si 6 O 18 ] hexagonal symmetry). The first structure determinations showed that in the [Si 6 O 18 ] 12- -6er rings of each Cordierites a Si 4+ by an Al 3+ - ion is replaced. Hence the corresponding part of the formula [AlSi 5 O 18 ] 13− for the silicate building block (yellow and dark gray triangles in the picture). These six-membered rings are interconnected by a further tetrahedral cation position surrounded by 4 oxygen and an octahedral position surrounded by 6 oxygen. In cordierite, aluminum Al 3+ (beryl: beryllium Be) is found on the ring-connecting tetrahedron position and magnesium Mg 2+ (beryl: aluminum Al 3+ ) on the octahedron positions . This analogy to the beryl structure and the assignment of all Si to the 6-ring tetrahedral positions led to the classification of cordierite as a ring silicate.

Later studies on the distribution of Al and Si showed that all tetrahedral positions must be taken into account for the description of the Si-Al distribution and that Si is also incorporated on the ring-connecting Al tetrahedral position. At temperatures above 830 ° C, the Si and Al are evenly distributed over all tetrahedral positions (high-temperature modification indialite). Even with the ideally ordered low-temperature modification cordierite, 1/3 of the ring-linking tetrahedron is occupied by Si. For cordierite and indialite, this results in an aluminosilicate framework structure made up of chains of four-membered rings in the c-direction, which are laterally connected to form six-membered rings. Structurally, cordierite is a tectosilicate with the idealized structural formula Mg 2 [Si 5 Al 4 ].

The substitution of Si by Al and its orderly distribution leads to a distortion of the crystal lattice and thus to a reduction in symmetry. Cordierite is therefore orthorhombic, but due to the formation of twins, it is similar to aragonite with a pseudohexagonal habit .

Cordierite is strongly pleochroic , which means that the color of the crystal changes visibly with the naked eye depending on the light exposure. Since cordierite is birefringent , it shows three different colors, namely light yellow, purple to blue and light blue.

The compound Mg 2 Al 3 [AlSi 5 O 18 ] is dimorphic and, in addition to the orthorhombic crystallizing cordierite, also occurs as a hexagonally crystallizing high-temperature modification indialite . Due to the strongly inhibited equilibrium of the disorder in the crystal lattice, all transitions between indialite and cordierite can be found in nature.

As Cerasit a cordierite is variety designated whose habit of the Trapiche - emeralds similar. Most Cerasite are also to muscovite and sericite or Pinit converted (see muscovite varieties ).

The variety iolite sunstone is a reddish colored cordierite due to the inclusion of hematite or goethite scales.

The iron-containing variety Steinheilit got its name from the chemist Johan Gadolin , who named the mineral after its discoverer Fabian Gotthard von Steinheil . He was a governor general of Finland (1810-1812, 1814-1823) interested in mineralogical issues .

Cordierite is a typical mineral of contact-metamorphic pelite , gneiss and mica schists , which were formed at pressures below 5 kbar and temperatures from 550 ° C to over 800 ° C ( Hornblende-Hornfels facies , pyroxene-Hornfels facies to sanidinite facies ). The accompanying minerals include andalusite , biotite , garnet , corundum , muscovite , sillimanite and spinel .

In addition to metapelites and granitic rocks, cordierite also occurs in metamorphic ultramafic rocks , the cordierite-anthophyllite gneisses. For most of these rocks, a two-stage formation process is assumed. The original rocks are volcanic rocks of continental or oceanic spreading zones , mostly basalts of the ocean floor. These are first leached out by hydrothermal solutions, especially seawater, which is heated along mid-ocean spreading zones and diffuses through the rocks of the ocean floor. This common process of ocean floor metamorphism removes calcium , potassium and iron from the basalts. If the remaining time, sericite - and chloritreichen rocks then regionalmetamorph changed form in the absence of calcium instead Klinoamphibolen ( actinolite , hornblende ) the Orthoamphibole Cummingtonite , anthophyllite and gedrite . Because of the likewise low potassium content, the cordierite-displacing minerals biotite , muscovite or potassium feldspar cannot form and cordierite is stable over a much larger temperature range than in metapelites.

With increasing temperatures, cordierite forms from 400 ° C at 1–3 kbar during the breakdown of chlorite:

The formation of cordierite is limited to pressures below 5 kbar. Cordierite degrades with increasing pressures

As a rather rare mineral formation, cordierite can sometimes be abundant at different sites, but overall it is not very common. So far (as of 2014) a little more than 900 locations for cordierite are known worldwide. In addition to its type locality Großer Arber in the Bavarian Forest and other places in the Upper Palatinate in Bavaria, the mineral appeared in Germany in several places in the Black Forest such as the Clara pit near Oberwolfach and a porphyry quarry near Detzeln in Baden-Württemberg, on the Blauer Kuppe in the Eschweger basin and in the former marmorite works near Hochstädten in Hesse, in some places in the area around Bad Harzburg in Lower Saxony, in many places in the North Rhine-Westphalian Siebengebirge near Bad Godesberg and Königswinter , in numerous places in the Eifel as below among others Andernach and Mendig in Rhineland-Palatinate, on the Schaumberg (near Theley) in the Saarland, in several quarries in the area around Chemnitz in Saxony, near Eckernförde in Schleswig-Holstein and on Dolmar near Meiningen in Thuringia.

The Näverberg field about 4 km west of the Falun mine in the Swedish province of Dalarnas, where up to 20 cm long, transparent crystals emerged, is known for its extraordinary cordierite finds . The largest known crystals with a length of up to 50 cm were found at La Fuenfria in the Spanish Sierra de Guadarrama and about half as large crystals are known from Cerro San Pedro near the Spanish municipality of Guadalix de la Sierra .

In Austria, the mineral was found in a basalt quarry on Pauliberg in Burgenland, at some sites in Carinthia , near Hessendorf (community of Dunkelsteinerwald) and in several places in the Waldviertel in Lower Austria, on Stradner Kogel and in a basalt quarry near Klöch in found in Styria, near Klein stroheim and in the Kürnberger Forest as well as in several places in the Mühlviertel in Upper Austria and at the Schattenspitze in the Ochsental (Silvretta) in Vorarlberg.

In Switzerland, cordierite has only been found in a few places in Bergell ( Val Bregaglia ) and in Val Rebolgin near Lostallo in the canton of Graubünden as well as at Brissago TI in Val Crodolo, near Miregn (municipality of Biasca ) and on the Sponda Alp in the municipality of Chironico in the canton Ticino to be found.

As a raw material for technical ceramics , cordierite is mainly produced synthetically . Cordierite foam is a fireproof ceramic with low heat conduction and expansion . It is used when high-temperature insulation is required in the case of frequent and large temperature fluctuations (heat shields, insulation of kilns, catalytic converters ).

Transparent, light to dark blue minerals are sold as gemstones under the name "lynx sapphire" or "water sapphire".

In legends and tales of the Vikings there is talk of a sunstone that shows a polarization pattern of the sky when the sky is cloudy, which shows the position of the sun . It was assumed that it was a cordierite crystal. Daylight shows a characteristic polarization pattern due to Rayleigh scattering , which is aligned in a characteristic way to the position of the sun. Cordierite could have served as a polarizing filter to detect this orientation.