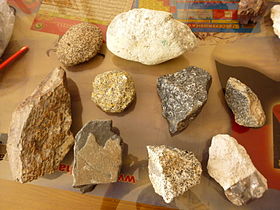 Samples of various igneous rocks from the Peruvian Andes

The chemical composition - in particular the content of silicon dioxide , the ratio of iron and magnesium to potassium , sodium and calcium as well as the ratio of the last three to one another - differs in magmatites from different locations. It is determined by the circumstances under which the igneous rock was formed:

Grouping according to structural characteristics

According to their solidification depth and the resulting structural features , igneous rocks can be divided petrographically into two groups: Plutonites (deep rocks) arise from the solidification of magma deep in the earth's interior , volcanics (effluent rocks) arise from magma that penetrated from the earth's interior to the earth's surface when Lava leaked to the surface of the earth and solidified there. Whether the molten rock is cooled and solidified above or below ground has a significant influence on the texture of the rock formed. In principle, the following applies here: the faster the melt cools, the more finely crystalline ("fine-grained") the rock becomes. The slower the magma cools (with good insulation by a several kilometers thick overburden ), the larger crystals can form in the cooling melt.

Plutonites (after Pluton , the Greek god of the underworld ) or deep rock are called igneous rocks , which slowly crystallize in a magma chamber within the earth's crust - usually at a depth of one to several kilometers . The corresponding rock body is called pluton, or, if it has particularly large dimensions and has a complex structure, also called batholith . The plutonites have a medium to coarsely crystalline ("coarse-grained") structure, which means that the individual mineral grains that make up the rock can be seen with the naked eye. The most widespread and best-known representative is granite .

Vulcanites (after Vulcanus , the Roman god of fire) or effluent rocks are those igneous rocks that have emerged from a rock melt that has reached the surface of the earth. They are also referred to as extrusive , eruptive, effusive and volcanic rocks. The penetration of magma to the surface of the earth and the associated natural phenomena are summarized under the term volcanism . The liquid magma emerging from a volcano (and, in general, the rock that emerged from it after solidification) is called lava . Because they quickly solidify due to the extreme temperature difference on the earth's surface, volcanic rocks are often very fine-grained or even glassy , as there is hardly any time for larger crystals to grow. Not infrequently, however, part of the melt slowly crystallizes out at a greater depth. Therefore, a porphyry structure , with larger inserts in a fine-grained matrix, is typical for many vulcanites . The most widespread and best-known representative is basalt .

A transition form between plutonic and volcanic rocks are the igneous dike rocks (also called sub- volcanics , transition magmatites, mesomagmatites or microplutonites). They form when a magma at a shallow crustal depth or in relative proximity to the earth's surface neither crystallizes particularly slowly nor particularly quickly. A special sub-volcanic rock is the laccolith . A typical representative of a sub-volcanic rock is dolerite , the sub-volcanic equivalent of basalt or gabbros (hence also called microgabbro ).

Grouping according to chemical composition

The igneous rocks can also be grouped according to their chemical composition. A distinction is made based on the ratio ( mol% ) of K 2 O + Na 2 O to SiO 2 between

A classification diagram for Plutonite.

A classification diagram for volcanic rocks.

Igneous rock can be classified according to various criteria. One of the most common methods is the classification in the route iron diagram based on the mineral inventory . Other common methods take into account the brightness ( color index ), the texture or the chemistry (e.g. the SiO 2 content or the content of alkalis , iron , magnesium or other elements).

Conversion into other rocks

The formation of igneous rocks is a step in the rock cycle . Just as every rock can be melted, every igneous rock can in principle go through further steps in this cycle and be converted or converted into other rock types: