The title of this article is ambiguous. For more meanings see Margaret Mitchell (disambiguation) . 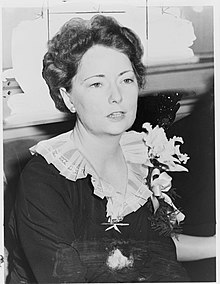 For her published in 1936 Southern -novel Gone with the Wind (Gone with the Wind) she was awarded the 1937 Pulitzer Prize awarded. The film adaptation of the same name from 1939 with Vivien Leigh and Clark Gable in the leading roles is one of the most successful films of all time. 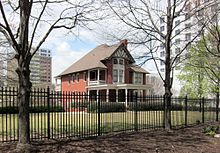 Margaret Mitchell was born in 1900 in Atlanta as the daughter of lawyer Eugene Muse Mitchell and Mary Isabelle "Maybelle" Stephens. Her nickname, under which she later appeared in public from time to time, was Peggy.

After Mitchell had finished her school and college education, she took over the parental household after the early death of her mother in 1918. She began writing a weekly column in the Sunday edition of the Atlanta Journal . On September 2, 1922, she married Berrien "Red" Upshaw, from whom she divorced in 1924. On July 4, 1925, she married Upshaw's friend John Marsh.

Blown by the wind

In 1926 she was confined to bed for a long time because of injuries and arthritis and began to write the novel Gone with the Wind . Her husband bought her a used Remington portable typewriter , on which she completed the 1000-page book within the next ten years. It was released on June 30, 1936. In the same year she sold the film rights to her book for US $ 50,000 to producer David O. Selznick . In 1937 she was awarded the Pulitzer Prize for Gone with the Wind . 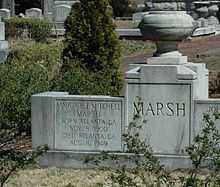 From the 1940s she worked exclusively on a voluntary basis for charitable purposes. Among other things, she sponsored the medical education of underprivileged college graduates, founded an emergency room for blacks and whites at Grady Hospital in Atlanta, got involved in the Afro-American movement for the rights and education of blacks in Atlanta, and helped in various hospitals during World War II .

On August 11, 1949, while crossing Peachtree Street, she was hit by a drunk taxi driver; her injuries were so severe that she never woke up from the coma . Margaret Mitchell died on August 16, 1949 in Grady Hospital and is buried in Oakland Cemetery , Atlanta.

In 1965 Mitchell was posthumously awarded the "Shining Light Award" by the Atlanta Gas Light and the radio station WSB for their "services in the interests of humanity". In 1989 Gone With the Wind was named Margaret Mitchell House by Atlanta's mayor as one of the city's official landmarks. In 1997 it was opened to the public as a museum.