The title of this article is ambiguous. Further meanings are listed under Vulcanus (disambiguation) .

This article on Roman mythology is missing the following important information:

Delete the list item in question when it's done. For explanations of the individual points, see here .

Help Wikipedia by researching and pasting it . 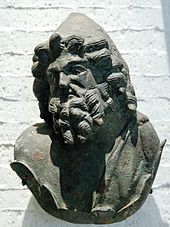 Vulcanus (original Latin main form of the name Volcanus , also Volchanus , Volganus , Volkanus ; German "Vulkan") is the god of fire in the Roman religion , as well as the blacksmith and all metalworkers who rely on the power of fire, e.g. B. the bronze caster or the coin hammer.

Its calling is to protect against the destructive dangers of fire. As an Interpretatio Romana of the Greek god Hephaestus , his tasks include forging jewelry or bronze gates and miracle weapons for the gods and demigods , e.g. B. the chariot for Sol and weapons for Aeneas . In this context, Vulcanus is considered a clever inventor. Its characteristics are accordingly: gifted with craftsmanship, rugged and peace-loving. His attributes are hammer , pliers, blacksmith's apron and anvil - symbols for the creation of metal goods.

With the adaptation to Hephaestus, the details of his birth were taken over in the Roman myth itself. His mother Juno is said to have pushed him out of heaven because of his deformity, as the Greek deity Hera did with her son Hephaestus.

That the Romans took over the name of the god from the Etruscans and their deity (Velkʰans) and latinized it is pure hypothesis. Velkʰans is associated with the Etruscan month name vel (c) itna (= March) and a spring deity . Due to his later identification with Hephaestus , the ancient Roman god Vulcanus can hardly be reconstructed. His consort is the Italian goddess Maia . He is the father of Caeculus and Cacus .

Head of Vulcanus with felt cap and tongs. Reverse: Jupiter on the chariot ( Biga ); early Roman coin from Aesernia 263/240 BC Chr.

In the fine arts , Vulcanus is represented as a blacksmith with a hammer, who makes the thunderbolts for Jupiter , or with a sky-blue, conical felt hood . The lame leg motif can also be found in other blacksmith deities (e.g. Hephaestus ) or legendary blacksmiths such as Wieland or Daidalus . His forge was located under the Etna volcano in Sicily or under the island of Vulcano , which was named after him. Sacred to him were the rooster, the lion, which was supposed to be breathtaking, the fir and the iron .

On Roman coins , like the other deities, he was depicted in a head profile with a felt hood. Later often in short working clothes together with his attributes hammer, tongs, anvil, forge fire and framed by a building or laurel wreath .

He was worshiped together with several other deities as a protector against conflagrations and therefore bore the old nickname Mulciber (" soothers " of the conflagration), who was worshiped as a god of fire by the pre-Roman Italians. The name Vulcanus was also used metonymically for "fire".

With the Romans he had his own priests ( Flemings ). Its main festival, the Vulcanalia , was celebrated on August 23rd (drought - danger of fire), when the heads of the Roman families threw small fish and other animals into the fire to appease Vulcanus and so relieve the danger of fire.

Vulcanus was a deity of a destructive element, unrestrained fire. Therefore his temples were always outside the cities. In Rome, the Temple of Vulcan was located on the Marsfeld . His opposite pole was Vesta , the guardian of the hearth fire, with whom he held the lecturerium .

The subject of the volcano appears in painting mainly in four different iconographic topoi . One of the few exceptions is a painting by Piero di Cosimo , which thematizes the early history of mankind and the youth of the volcano. Vulkan is often old, bald and gaunt, wears a leather forge apron as the only clothing and can be recognized by his bony and often hunched body. The attributes double ax , hammer or pliers are added to it as further distinguishing marks . His assistants surround him. In the ancient tradition there are one-eyed cyclops , but the assistants shown in this way are rare in modern art. The following is a selection of important representations:

Volcano in the forge

Venus in the forge of the volcano

Apollo in the forge of the volcano

The industrial fountain in Düsseldorf shows Vulcanus as the "blacksmith Vulkan" as the central figure.

Vulcanus at the main train station in Mainz