The title of this article is ambiguous. Further meanings are listed under Hera (disambiguation) . 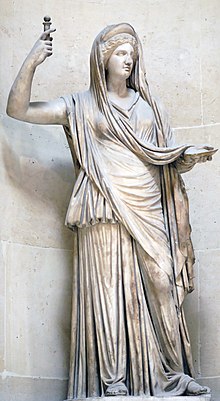 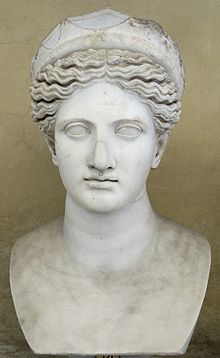 Hera ( ancient Greek Ἥρα ) is in Greek mythology the wife and sister of Zeus and thus the daughter of Kronos and Rhea . She belongs to the twelve Olympic deities , the Olympioi. The name Hera may be the feminine form of Heros (Lord).

The local myth says that Hera was born under a Lygos tree on Samos , but this is not known outside the island. Once a year she met her husband Zeus on Samos under a Lygos tree (" Holy Wedding "). A bath in the Imbrasos then renewed her virginity. The related festival on Samos, called Tonaia , at which the cult image of the goddess was wrapped with branches of Lygos, commemorated this event. This tree stood at the altar in Heraion of Samos and was described by Pausanias , among others . Her children - Ares , Hebe , Eileithyia  - are all born of their marriage to their brother Zeus. Her son Hephaestus is also a son of Zeus with Homer , with Hesiod and others he was born to Hera alone.

Hera's attributes include the cuckoo , the peacock, the cow and the pomegranate . She is usually represented with a crown or diadem and a scepter. In her honor , regular competitions called Heraia were held at various locations .

Hera jealously watches Zeus' numerous love affairs and expresses her anger by pouting or bickering. However, she lacks the courage to actively resist; if he threatens her, she gives in quickly, but then knows how to use the ruse . Even Homer describes this not without irony - according to Egon Friedell , he used it to characterize the “misunderstood woman”. However, she persecutes his illegitimate children. Dionysus is thrown into a frenzy; the same fate applies to Athamas because he was the tutor of this god, as does Ino , who received him from Hermes for care. In the Homeric Hymn to Apollo , who is also the mother of them Typhaon does, it sets Python depends on Leto to kill that of Zeus and Apollo and Artemis was pregnant.

Hera is the guardian of marital sexuality. She is responsible for the protection of marriage and childbirth. In Argos she was worshiped as Eileithyia , the goddess of birth. In the theogony of Hesiod , Eileithyia (also: Ilithya) is not embodied by Hera herself; there she is the daughter of Hera and Zeus.

As Hera Zygia , she is the patroness of the wedding night .

In the western Mediterranean, the goddess Astarte was often equated with Hera in her capacity as queen of heaven. The Roman goddess Juno was also equated with her.

Hera in the fine arts 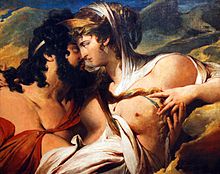 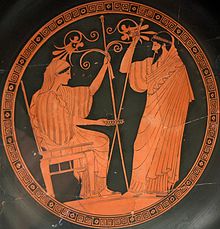 The plastic representations of Hera, of which we have very few from Greek times, mainly adhere to Homer's description: large, round, open eyes ( βοῶπις boōpis , literally "cow-eyed" in the sense of "big-eyed" as an attribute of beauty), more strictly , majestic facial expression, body shape of a flowering matron ; In addition, modest clothing: an apron-up chiton , which only leaves the neck and arms uncovered, with a wide outer garment that covers the entire figure, the royal head bandage ( stephane ), often a veil.

The pomegranate in her hand is the symbol of fertility, which also denotes the apples that Gaia had grown at her wedding. The most common attributes are also: the scepter as a sign of rulership, the patera or sacrificial bowl in hand, flowers and leaves (as symbols of nature's blessing) and the peacock at their feet. The myth reports that Hera is said to have taken the "eyes" on the peacock's feathers from her hundred-eyed shepherd Argos after his death and put them on the peacock's feathers. The cuckoo is also sacred to her. When Zeus fell in love with his sister Hera, he let a storm come and turned into a cuckoo, which the compassionate Hera hid in her robe, where Zeus changed back and slept with her.

The most famous image of Hera was the colossal gold ivory statue of Polyklet in Heraion of Argos , of which Roman coin images give an idea. Hera sits here on a richly decorated throne, her forehead adorned with a diadem , on which the Charites and Horen were formed in relief; In one hand she held a pomegranate, in the other the scepter on which the cuckoo sat. Among the myths of Hera, the holy marriage to Zeus has been treated the most frequently.