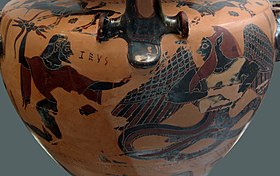 Zeus hurls lightning against Typhon, black-figure hydria , around 550 BC BC , State Collections of Antiquities (Inv. 596)

Gaia united with Tartarus to take revenge on Zeus for the defeat of their children, the titans and giants . She gave birth to Typhon in the Koryk Caves near Korykos in Cilicia in southeastern Asia Minor , so that he, like Zeus, could grow up undisturbed in his own youth. He was presented as an indescribably hideous monster , a sky-high giant with numerous dragon and snake heads , which either grew out of his hair, his shoulders or his hands and could speak in the language of the gods and many animals. His abdomen ended in two huge snake bodies instead of legs. In the struggle for supremacy over the world, he finally succumbed to Zeus in a terrible battle between the gods.

Typhon played the role of the father of the warm and dangerous winds in Greek mythology. This is related to the Greek τύφειν týphein ("to smoke"), from which the word τυφῶν typhṓn is probably derived, as is the Persian طوفان Tufân ("storm"). The Arabs expanded this term to include the tropical cyclones in the Indian Ocean, from which the current term Typhoon is probably derived. The Chinese 颱風 tái fēng "typhoon" is very similar in pronunciation and meaning , although this word probably goes back to the Min expression 風 篩 fēng shāi "sieve-like wind". It is not known whether there is a linguistic connection between the two terms.

In a variant of the myth, not Gaia, but Hera is the mother of Typhon. Hera is angry with Zeus , who without her participation and motherhood gave birth to the goddess Athena out of his head. Now Hera wants to do the same and, without Zeus' participation, give birth to a terrifying creature that will also compel respect in Olympus.

She asks Gaia for this favor, Gaia grants it, and when the time is up, Hera gives birth to the Typhon, which she gives in the care and watch of a female dragon living near Delphi , the python , who is later shot by Apollon .

The fight with Zeus

After he grew up, he went up to Olympus , where he scared the gods with his roar from a hundred throats so that they fled to Egypt , where they hid as animals. So Zeus turned into a ram - while Athena was the only one who stood firm and mocked Zeus and the others. Zeus finally resumed his original form and faced the Typhon to fight. By a lightning hit of Zeus Typhon fled to the mountain Kasion where it came again to fight. In the ensuing battle, Typhon was able to embrace Zeus with his numerous arms in such a way that he was finally able to steal the sickle that had already emasculated Uranus . He severed the tendons of Zeus from his body and gave them to the Delphyne , a monster that lived in the Koryk cave in which he was born. And Zeus was hidden there too. Hermes finally found the helpless Zeus, distracted Delphyne, stole her tendons and gave them back to Zeus.

Zeus fetched a new supply of thunderbolts from Olympus, as these had also been stolen from him by Typhon, and faced Typhon again to fight. He had to retreat to Mount Nysa , where, following the advice of the goddesses of fate, he ate food just as people eat - one-day fruits that should only temporarily strengthen him. Trusting in his only seemingly regained strength, he met Zeus on the Thracian mountain Haimos and threw huge stones at him, who responded with thunder and lightning and badly damaged Typhon. The typhon blood shed here is said to have given the mountain its name, because αἷμα haima is the Greek name for "blood".

Typhon fled to Sicily and Zeus threw Etna at Typhon. Typhon has been trapped under Mount Etna ever since. In his anger he made Mount Etna tremble again and again and spit fire and rocks.

Before Typhon was defeated, he and his wife Echidna fathered several monsters : the three-headed Kerberos , who guards the entrance to Hades as a hellhound, the two-headed Orthos , the Sphinx , the Chimera , the Hydra and the eagle Aithon .