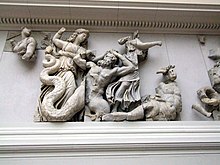 The three Moiren slay the two giants Agrios and Thoas with bronze clubs during the Gigantomachy , Pergamon Altar , Berlin

The Fates or Moirai , Sg. Moira ( Greek Μοῖραι, Μοῖρα Moírai, Moira , German , share, lot, fate ' , latin Moerae, Moera ) are in Greek mythology, a group of Fates . Their counterparts in Roman mythology are the Parzen . With the Etruscans the Moiren stand above the gods.

As an appellative , the word moira means part of the whole, like a share in the spoils of war. Since Homer it has also stood for the destiny assigned to all living beings from birth, which arises as an inevitable consequence of the divine distribution of roles. The term moira is ambivalent in terms of content, as it is usually associated with calamity and is used euphemistically for death, but it can also stand for the happiness of those who are fortunate enough. The negative main meaning predominates not only in literature, it is also clear from numerous grave inscriptions from the sixth century BC to late antiquity.

In the oldest literature, the epics of Homer, the moira occurs almost exclusively in the singular, but not in the sense of an individual goddess, but as the personified fate of each individual. The distinction between the appellative use of moira and the use as a personification is often not possible. She becomes clearly recognizable as a goddess, for example, when she appears in battle with Thanatos or the Keren . In the Iliad she appears as the one who brings everyone to an end at the end of his life, for example when Lykaon says that she has handed him over to the Pelids for the second time, or when Hector has to remain alone in front of the walls of Troy because of her and she haunts him, when his life comes to an end. During the fight, she leads Amphios to Aias and Tlepolemos to Sarpedon , as her time has come to die. The idea that for mortals at birth she spins a thread into which fate has already been spun appears in Hector when he is eaten by dogs after his death, or in Achilles who, when his time has come, everything has to endure what fate has spun for him, but not before, when his time had not come and Hera can still protect him. It also appears in this meaning when Agamemnon says that Zeus , Moira and Erinys have put delusion into his heart. In the majority of cases, the Moiren appear only once in Homer and that without naming them. In the Odyssey , the spinning sisters appear at one point as the Kataklothes ( Κατακλῶθες Kataklṓthes , German 'spinner' ).

The relationship of the gods to the Moiren seems to indicate that the gods cannot change the destiny they have determined. Zeus wants to save Sarpedon , whose time has run out, but cannot do so without destroying the rest of the order. Especially he, as the supreme god, cannot disturb the existing order and is therefore also worshiped as Zeus Moiragetes .

The literature attests to the persistent notion of the great power of the Moiren, which, however, was never made binding. Since the Moiren could be thought of as being present everywhere, they appear on Olympus as well as in Hades , Tartaros or among people. Their attributions vary between the extremes as Chthonioi up to Olympioi on the side of Zeus and they are brought into the vicinity of the Horen as well as the Erinyen and Keren . In Hesiod's Shield of Heracles they are ready on the battlefield when the Keren pounce on their victims, the Keren appear here merely as the executors of the fate sealed by the Moiren. To emphasize their closeness to one another, the Erinyes are called Moiren by the Orphics, and in a hymn by Stobaios , Clotho and Lachesis are invoked to send the Horen. In Pindar they appear as goddesses of justice who are far from evil intentions. They give Zeus the Themis as wife, support Heracles in founding the Olympic Games , are the goddesses who appear at birth with Eileithyia , and are generally invoked as helpful goddesses. Pausanias mentions in a picture description of the Tyche that this was one of the Moiren at Pindar. Aeschylus emphasizes the relationship to the Erinyes, who are jointly praised by him for the virility and happiness of the brides and as stewards of the law, even if the law is broken by Apollo . In The Shackled Prometheus the power of the Moiren and Erinyen is portrayed as binding for humans and gods alike: They steer the rudder of necessity, even Zeus, as the one who regulates the law of fate, cannot escape the already determined fate. With Euripides the Moiren are outwitted by Apollon, but are also invoked as the seated closest to Zeus on the throne, and in Apollodore's library Apollon obtains the prolongation of Admetus through petitions . With Aristophanes they appear in the underworld, but also sing at the wedding of Zeus and Hera .

A scene of gods on a Roman sarcophagus, approx. 240 AD. In the center the Moiren Lachesis with globe and cloth with spindle

In older works of art there are no attributes of moiré, later the scepter. In Roman times, clotho wore a spindle, Lachesis a stick or a globe and Atropos scroll or tablet or a sundial. The library of Apollodorus portrays them in their fight against the giants Agrios and Thoon as armed with iron clubs.

The Etruscan religion included the idea of ​​the transience of man and peoples. So the Etruscans were given eight or, according to other sources, ten saecula of existence. One saeculum lasted until the last one to be born in the previous saeculum died. The death of the individual could be delayed by up to ten years through religious rituals, the end of the Etruscan people by up to 30 years. The supreme god, Tinia , granted a first delay, but for a second "the Moiren, who still ruled over the gods, were responsible, whose names the Etruscans were not allowed to pronounce."