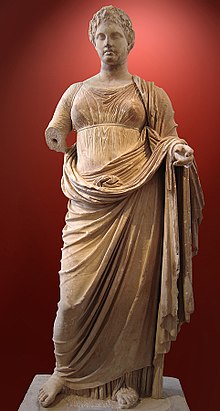 Themis ( ancient Greek Θέμις Thémis ) is the daughter of Uranus and Gaia in Greek mythology and belongs to the Titan family . She was wife of Zeus and mother of the Horen (the "seasons"). She is considered the goddess of justice, custom and order, as well as philosophy.

She was - after Metis - the second wife of Zeus, who with her fathered the Horen (goddesses who supervised the regular life) and Moiren (a group of three of fate goddesses).

After Gaia, she was the second patroness of the oracle of Delphi , which was then taken over by Phoibe or even by Apollo .

Themis knew the future and possessed a knowledge of things that exceeded even that of Zeus . So she warned him against a relationship with Thetis , as one of her sons would become more powerful than the father. Deucalion and Pyrrha made it possible for them to survive the flood and to repopulate the earth. She warned the Atlas that a son of Zeus would come to steal the golden apples from the Hesperides - which is why the latter turned down Perseus' request for accommodation and was petrified as a punishment.