The title of this article is ambiguous. Further meanings are listed under Kronos (disambiguation) . 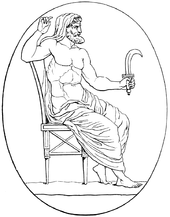 Kronos armed with the sickle, after an intaglio

Kronos ( ancient Greek Κρόνος Krónos ) is in Greek mythology the youngest son of Gaia ( earth ) and Uranos ( heaven ), leader of the Titans and father of Zeus . In Roman mythology it corresponds to Saturn (us) .

His name was equated very early in ancient folk etymology (in Orphics ) with that of the time god Chronos ( Greek Χρόνος Chrónos ), but this is etymologically incorrect; originally there were two different gods who were then merged with one another in some traditions. The etymology is controversial; a derivation of kraíno has been considered, then Kronos would be the “finisher”. It was also assumed that the name was of pre-Greek origin and that Kronos was taken from a pre-Greek tradition. The author of the Derveni papyrus found in 1962 , one of the oldest known literary writings of Greek antiquity, offers a different etymology by deriving Kronos from κρούειν kroúein , German for ' to bump, to hit' .

In the early days of mythology, Kronos did not yet have a permanent place in the genealogy of the gods; Of the various versions of the myth, the one handed down by Hesiod prevailed, making Kronos a son of Uranus and Gaia.

Since Uranos hated his children - the Cyclops and Hekatoncheirs - so much that he banished them to the Tartarus , Gaia gave birth to her other children - the Titans - in secret. She finally instigated Kronos to emasculate his father with a sickle .

Kronos thus became the ruler of the world and the founder of the Golden Age . He was married to his sister Rhea (Rheia). For fear of being disempowered himself, however, he ate all the children who arose from this connection: Hestia , Demeter , Hera , Hades and Poseidon , the Kronids . However, on the advice of Gaia and Uranos, Rhea hid the youngest son, Zeus , in the cave of Psychro in the Dikti Mountains in Crete , while she presented Kronos with a stone wrapped in a diaper, which he swallowed without noticing the deception. So Zeus could grow up undisturbed. Zeus later succeeded in overcoming his father with cunning and violence, whereupon Kronos first spat out the stone and then his entwined children. Zeus set up the stone at the cult site of Pytho ( Delphi ) so that it would be admired by mortals there.

The Orphics said that one day Kronos was lying there intoxicated by the honey flowing out of the oak trees and was thus able to be tied up by Zeus. Then he brought him to the "Isle of the Blessed", the Elysian realms , which are on the edge of the earth , where Kronos is still today. Therefore, the Golden Age still continues there, which for the rest of the known world has come to an end with its disempowerment. Metis , the first lover of Zeus, helped him to disempower his father by handing him the potion, which stunned Kronos and finally forced him to give up all the children who had previously been devoured.

Kronos was a relatively shadowy figure from mythology who was worshiped only to a very limited extent. However, there was a rural festival celebrated in his honor, the Kronien. The stone he spat was worshiped in Delphi; he was anointed daily with oil and wrapped in woolen bandages on feast days. It is not to be confused with another stone, the omphalus , which is also erected and revered in Delphi . The stone cult was widespread in ancient times in the Mediterranean.

Family tree of the Olympian gods