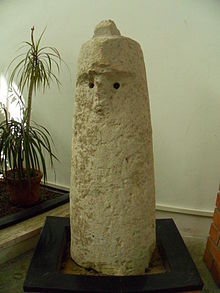 Stone cults and stone worship ( Litholatrie ) have passed since the ancient widespread. It is possible that erect stones were already considered to represent deities in the Neolithic Age and were therefore cult stones. In this sense, some researchers also interpret the obelisks in ancient Egypt and the Baityloi of Sardinia and the Irish-Celtic Turoe stone , in Greece it is the Omphaloi .

The worship of erect stones begins in Natufien . A small stone pillar in the alcove of a Jericho II house is not the only evidence of this. In Munhata, south of Lake Tiberias , which was explored in the 1960s by Jean Perrot (1920–2012), several plastered niches in which a stone were found in the north walls of the houses, the lowest horizons from the pre-ceramic Neolithic B, revealed niches was standing. Munhata had a complex that stretched over 300 square meters and was surrounded by a thick mud brick wall on stone foundations. A podium made of three large basalt slabs with wide drainage channels in the center, a paved basin 3 × 2 m in size and several hearths suggest that the complex dates from the 8th to 7th millennium BC. Was a sanctuary. In the enclosed oval complex of Rosh Zin, another Natufia settlement, a large raw stone pillar had been erected. In the filling around its base one found offerings, which were probably made on the occasion of the erection of the column.

Moses received the order from YHWH to destroy the cult stones in Canaan. The worship of menhirs accompanies the stone cult into historical times. In the Old Testament the holy stone is called Mazewa . In contrast to the view of the Canaanites, who identified him with the deity, the Israelites reinterpreted him as a sign of God's presence or as a memorial to special events, as a "testimony stone". The Gilgal of the Bible, the circle of twelve stones, symbols of the twelve tribes of Israel, which Joshua supposedly had erected as a reminder of the crossing of the Jordan, was probably a complex from the era of the Palestinian megalithic culture. The story of Jacob's ladder tells that he slept on a stone and realized that "the Lord was in this place." He set up the stone, doused it with oil and called it "Bethel", which means "House of God". In spite of the prophets' opposition to stone worship, menhirs, rows, circles and squares made of erect elongated blocks in Israel and Jordan were remarkably often preserved in the area of ​​megalithic necropolises. The monuments of Ain es Zerka in Jordan on a rock terrace with around 50 large stone graves are among the most impressive . On an elevation in the center of the plateau, three menhirs almost 2.0 m high rise up, which are enclosed by a small stone circle.

In ancient times, different peoples in the Mediterranean revered stones. A stone cult is documented in the Canaanite religion as part of the Ba'al cult . In Greek these stones were called baitýlia or baítyloi , Latin baetuli ; it is the German word betyl derived (Additional possible in German literature, the names Bätylien , Bäthylien , Baitylien , Baethylien and Betyle before). The Greek name is derived from Aramaic bet el ("House of God", cf. Hebrew Bet-El ).

The word batyl is first attested in the 1st century by Pliny the Elder , who reports in his Naturalis historia of black, round stones that were considered sacred and whose (magical) help was used in the siege of cities and in naval warfare; her name is baetuli . The Phoenician scholar Herennios Philon (Philon von Byblos) who wrote in Greek also uses the term. He cites a (probably fictional) Phoenician scholar named Sanchuniathon who lived before the time of the Trojan War . According to Philon's account, there were “ ensouled ” stones ( baitýlia ), which Uranos produced and used in his fight against his son Kronos . As a representative of the religious interpretation of euhemerism , which regards the gods as mortals deified by man, Philo meant that Uranos and Kronos were originally mortals who were later made gods. According to Philo's version of the myth, the ensouled stones could evidently move on their own and thus hit the opponent Kronos.

Numerous coins from the Roman Empire , on which they are depicted, testify to the popularity of the batyle among the Phoenicians . Such coins come from the cities of Sidon , Byblos and Tire .

Some of the batyls were meteorites . They were either consecrated to the gods or were considered divine themselves. The origin of the meteorites "from the sky" was known. Among the Greek gods, Apollo was most closely associated with the stone cult. The name of the god Hermes (Greek ἕρμα herma : "rock", "stone", "ballast") indicates a connection with a stone cult.

For the Israelites the stone was significant at the Jacob slept, according to Gen 28:11 when he was in a dream vision of the Jacob's ladder saw. He anointed this stone the following morning and set it as a memorial stone. According to the biblical story, he called the place Bet-El .

Stone cult is also attested in the Minoan culture on Crete , where cult stones were regarded as residences of deities or spirits of the deceased. The Hittites also had holy stones that were in temples or sanctuaries and were anointed. In 2008, a stele of Kuttamuwa was discovered in Zincirli , Turkey, dating from the 8th century BC. And its inscription says that the soul of the Kuttamuwa depicted on it lived in the stone after his death.

A few meters from the giant grave of Tamuli in Sardinia are the approximately 1.5 meter high perdas marmuradas - six nuragic baityloi (Italian: Betili), three male and three female, which were known as "sa petra uue sunt sos thithiclos" (the stone with the breasts) and refer to the Sardinian stone cult. The stones, especially as a combination of three in many places in Sardinia, come u. a. at the giant grave of Perdu Pes near Paulilatino . The giant graves of the 2nd generation like Pradu Su Chiai but also some Domus de Janas (like Molafa ) have a tooth frieze (Italian: fregio a dentelli) with three recesses, which were used to accommodate small grenade-shaped baityloi.