The kohlrabi ( Brassica oleracea var. Gongylodes L. ), also top kohlrabi , Oberrübe , Turnip (Vienna), Rübkohl (Switzerland), Stängelrübe and air Kohlrabi is a vegetable plant . It is one of the many cultivated forms of vegetable cabbage . The thickened, above-ground sprout axis ( tuber ) is used here .

The name is derived from the Latin words "caulis" (cabbage) and "rapum" (turnip / root tuber), thus meaning swede. This is why top beet, unlike other beets, grows above the ground. 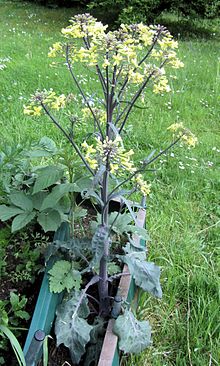 Flowering in the second year

Kohlrabi is a biennial plant , the first year the tuber is formed, and the second year the stem with a branched inflorescence emerges from which pods that contain the seeds are formed. Ripe seeds show black, full grains and cannot be crushed on firm ground.

The tuber is the compressed, thickened main shoot of the plant. It arises above the second or third leaf through primary growth in the thickness of the stem axis. The shape of the tuber can be spherical, flat-round or oval, the color of the skin whitish, white-green to strong green, reddish or purple. The diameter is between 5 and 20 cm, or even more, depending on the variety. Depending on the variety and use, the weight is between 100 g and over 8 kg per tuber. Individual values ​​can be significantly higher.

The leaves are long-stalked, dark green, oblong ovoid and more or less strongly serrated. They are covered with a bluish-white layer of wax. The plants form a taproot .

The flower formation can already be triggered in the two-leaf stage by prolonged cold stimuli ( vernalization ); high temperatures also lead to devernalization .

The taste of kohlrabi is based on the content of sugar, fruit acids and mustard oil glycosides . Malic acid and citric acid clearly dominate the fruit acids .

Kohlrabi leaves have about twice as high a content of vitamin C as the tuber, the content of carotene is 100 times that of calcium and iron 10 times.

There are several varieties, in Germany 30 white and 14 blue kohlrabi varieties. CMS varieties (F1 hybrids) are becoming increasingly popular . Important properties are: yield, low tendency of the tubers to lignify and burst, rapid growth and low tendency to shoot . The varieties that provide the largest tubers are Gigant and Superschmelz . The varieties differ in color (white and blue) and the time of cultivation, white kohlrabi varieties require a shorter cultivation time than blue varieties. If the planting distance is too short, kohlrabi forms cylindrical tuber shapes, mainly due to a lack of light.

Early varieties are difficult to store, the storage period is only two to three weeks. Autumn cabbage can be stored for several months without leaves.

There are two grades in the EU :

With regard to the soil, kohlrabi is sensitive to major fluctuations in soil moisture, which leads to the bulbs bursting. In terms of climate, kohlrabi has a wide amplitude and grows well in Central and Western Europe. In summer and autumn, low temperatures are sufficient, but in the youth stage it needs warmth.

In the crop rotation , longer breaks in cultivation with other cruciferous vegetables are desirable. Short crop rotations increase the risk of soil-borne diseases, especially club root . Kohlrabi does not make any other claims regarding the previous crop. All types of vegetables are also suitable as secondary crops. Kohlrabi makes no special demands on the nitrogen supply; Excessive nitrogen fertilization can easily lead to increased nitrate levels in the tuber.

With kohlrabi there is spring, summer and autumn outdoor production in Central Europe, which produce for the fresh market and the processing industry. Kohlrabi has a short development time and is therefore often grown as a first crop, catch crop or after crop. Central European cultivation can supply the market with fresh produce between May and November. The cultivation for the fresh market takes place predominantly in horticultural vegetable farms, whereas the cultivation for industrial processing mostly in agricultural companies ( field vegetable growing ).

The cultivation of young plants and the subsequent planting in the field is widespread. The densities vary between 16 and 17 pieces per m² in the spring cultivation and 8 to 10 pieces per m² in the later varieties. In the spring, the plants are partly covered once or twice with foils for early use. In spring cultivation the yields are 20 to 30 tons per hectare, in summer and autumn 45 to 70 tons per hectare. Fresh produce is harvested by hand. Large kohlrabi for industrial processing can be recovered using head cabbage harvesters with a special kohlrabi cutter.

Kohlrabi harvest in the greenhouse in 1947

The cultivation of kohlrabi in the greenhouse is particularly widespread in the Netherlands, Germany, Switzerland and Austria. In the greenhouse, cultivation is also carried out for winter harvests. In terms of diseases, downy mildew and black- leggedness are only important if there is poor ventilation . Greenhouse kohlrabi is harvested with leaves that indicate the degree of freshness.

Viral diseases are of no economic importance in kohlrabi; the cauliflower mosaic virus occurs occasionally. The bacterial and fungal diseases are essentially the same as those of head cabbage and cauliflower : especially brassicot and downy mildew . The fungus Cylindrosporium concentricum occurs especially in kohlrabi and attacks the leaves and tuber. The leaves fall off prematurely, the tissue turns gray-green, black-gray spots form on the tuber, later callus tissue .

Among the animal pests are the same as those of head and cauliflower. The great cabbage weevil ( Ceutorhynchus napi ) is important in open field cultivation . The deposited eggs cause the tubers to burst.

The young tubers are peeled and cut into slices or pieces, boiled or steamed - as a side dish, puree, in stews and soups, for fillings and casseroles. Young leaves can be used like other leafy vegetables. In parts of France the tubers are sliced ​​and preserved like sauerkraut . Kohlrabi is also suitable as a raw vegetable.

The origin of the kohlrabi is unclear. Frequently mentioned areas of possible domestication are the Mediterranean and Central Asia . Just as unclear is the time of its creation.

There is only reliable evidence from Europe in the 16th century. From this period there are clearly identifiable drawings in herbal books . The first indications of flat-round tubers come from the 18th century. In German-speaking countries, kohlrabi was particularly widespread in the 19th century. It is often considered a typical German vegetable, so the German name has been adopted in several other languages, such as English, Russian and Japanese.

In the continuation of the Allgemeine teutschen Garten-Magazin from 1815, the small early (Viennese) kohlrabi , the large glass kohlrabi and the common green kohlrabi are listed of the white kohlrabi varieties, and the blue and red varieties are the early blue kohlrabi and the late blue kohlrabi . Today the most famous varieties in Germany are Wiesmoor white shoot , Wiener blue glass and blue bacon .