Malic acid ( 2-hydroxy succinic acid , more rarely, malic acid ) is a chemical compound from the groups of dicarboxylic acids and hydroxycarboxylic acids serving as dextrorotatory D - and as levorotatory L occurs -malic acid. The L -form is an intermediate product in the citric acid cycle . In nature, L- malic acid is mostly found in unripe fruits such as apples , quinces , grapes , barberry berries , rowan berries and gooseberries . The esters and salts of malic acid are called malates (from Latin malum = apple, not to be confused with maleates , the esters and salts of maleic acid ). 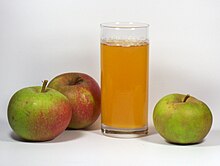 L- malic acid was first isolated from apple juice and described by Carl Wilhelm Scheele in 1785 . In 1787 Antoine Lavoisier proposed the name acid malique , derived from the Latin word for apple (mālum) . Paul Walden was able to prove the chirality and the reversal of configuration at the carbon atom through the synthesis of L -malic acid and D -malic acid .

The L -malic acid and its salts (Malate), after biotechnological processes, catalyzed by the enzyme fumarate hydratase , of fumaric acid (E 297) or as a metabolite of bacteria and fungi , (z. B. Brevibacterium, Corynebacterium, Escherichia, Microbacterium Proteus, Pichia) won. The enantiospecific addition of water to maleic acid is catalyzed by maleate hydratase and leads to D -malic acid. Racemic malic acid can be split into L -malic acid and D -malic acid by the formation of diastereomeric salts with a suitable enantiomerically pure chiral amine .

Malic acid occurs in the metabolism of all cells. The transport from the cytosol to the mitochondrion takes place via the malate-aspartate shuttle .

Malic acid is responsible for the sour taste of apples, although many other plants also contain malic acid. As the fruit ripens, its content decreases while the sugar content increases. This effect is of essential importance for the reproduction of the apple tree, as the high content of malic acid in the fruits prevents animals from eating them and thus distributing the still unripe seeds.

In plants with a Crassulacean acid metabolism (CAM), carbon dioxide is absorbed through the respiratory pores of the leaf at night and fixed by the enzyme PEP carboxylase . Another chain of reactions creates malate. Malate is the salt of malic acid and is stored in the vacuoles of CAM plants in the form of the acid at night. During the day, CO 2 is released again from malic acid and fed directly into the Calvin cycle . Due to the temporal separation of the reaction, also known as the diurnal acid rhythm , CAM plants have the advantage of closing their stomata during the day. In this way, evaporation losses can be counteracted.