The Calvin cycle (also Calvin-Benson cycle or ribulose bisphosphate cycle ) is a cyclical sequence of chemical conversions through which carbon dioxide (CO 2 ) is reduced to glucose and assimilated . The metabolic pathway takes place in C 3 plants and with additional reactions in all other photosynthetic ( photoautotrophic ) organisms; it is their dark reaction . He also serves many chemautotrophic beings for assimilation of carbon from carbon dioxide. In analogy to the citric acid cycle , the Calvin cycle is also known as the reductive pentose phosphate cycle . The cycle was discovered by US biochemists Melvin Calvin , Andrew A. Benson, and James Alan Bassham between 1946 and the mid-1950s and is sometimes named after Benson and Calvin, or after all three researchers.

The Calvin cycle consists of several cyclically arranged enzymatic steps and takes place in the stroma of the chloroplasts in plants, but in the cytoplasm in bacteria . The individual sub-steps can be divided into three phases: the fixation of CO 2 , the reduction of the primary fixation product ( 3-phosphoglycerate ) and the regeneration of the CO 2 acceptor ( ribulose-1,5-bisphosphate ).

NADPH is used as the reducing agent for the CO 2 reduction in the Calvin cycle , which is oxidized to NADP + . The reduction is endergonic , as the energy source is ATP , which releases energy by splitting it into ADP and phosphate .

The individual steps of the cycle

The primary fixation product 3-phosphoglycerate is not only an important intermediate in the Calvin cycle, but also occurs at other important points in the build-up and breakdown of glucose: gluconeogenesis or glycolysis in the cytoplasm . It also serves as a precursor to building up the starch stores in the chloroplast . Before 3-PG enters into the above-mentioned reactions, however, it is reduced to glyceraldehyde-3-phosphate (abbreviated G3P or GAP) in the chloroplast in the next part of the calvin cycle .

After phosphorylation by a kinase and reduction by a special glyceraldehyde-3-phosphate dehydrogenase (GAPDH; as a reductant NADPH instead of NADH), the gluconeogenesis metabolite glyceraldehyde-3-phosphate (GAP) is formed, an important branch point. Since one molecule of CO 2 is fixed in each cycle , one molecule of the Triose GAP is available for biosynthesis after every three cycles, and is in equilibrium with dihydroxyacetone phosphate (DHAP). Both are also known as triose phosphates. They are the first carbohydrates to arise as a gain in assimilation and can either

With sucrose, other parts of the plant can also be supplied with sugar via the phloem . In order for the cycle to start again, some of the triose phosphates have to be regenerated to the primary acceptor ribulose-1,5-bisphosphate . The third part of the Calvin cycle is used for this purpose.

In the third part, the ring closure of the Calvin cycle takes place via the reductive pentose phosphate route. When three CO 2 are fixed to ribulose-1,5-bisphosphate (C 5 ), six triose phosphates (C 3 ) are consequently formed . Of these, however, only one is a "real" gain in assimilation, from the other five the three consumed ribulose-1,5-bisphosphates have to be regenerated.

The carboxylation of ribulose-1,5-bisphosphates ( 1 ) catalyzed by RuBisCO . This is in equilibrium with its enediol form ( 2 ) through a keto-enol tautomerism . CO 2 condenses on this enediol and forms 2-carboxy-3-ketoarabinol-1,5-bisphosphate ( 3 ), which is split into two molecules of 3-phosphoglycerate ( 4 ) by hydrolysis .

In detail, the CO 2 group is added to the C2 atom of the enol form of ribulose-1,5-bisphosphate. An enzyme-bound, hypothetical 3-oxo-acid (arabinitol; precisely: 2-carboxy-3-keto- D -arabinol-1,5-bisphosphate) is formed as an unstable intermediate which spontaneously ( hydrolyzed by water at the C3 atom ) in Two molecules of the triose precursor 3-phosphoglycerate (3-PG) break down. The aforementioned arabinite (C 6 ) first produces a molecule of D -3-phosphoglycerate (C 3 ) and a carbanion (also C 3 ) consisting of three carbon atoms, which is also converted into the primary fixation product phosphoglycerate by protonation. As a result, two molecules of phosphoglycerate are produced net per bound carbon dioxide, one of which contains the newly fixed carbon of the carbon dioxide. 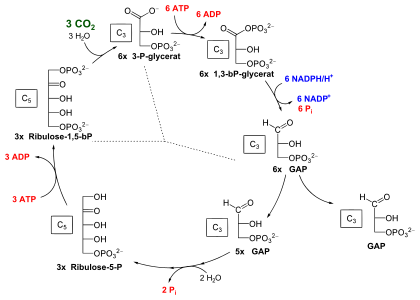 The Calvin cycle in detail.

In the reductive pentose phosphate pathway , three GAP molecules and two DHAP molecules are finally converted into three C 5 molecules in a branched reaction sequence via various C 3 , C 4 , C 6 and C 7 sugar intermediates . These are converted into ribulose-5-phosphate and phosphorylated with ATP to ribulose-1,5-bisphosphate. Above all, aldolases , transketolases and phosphatases are necessary for these processes .

Reactions of the reductive pentose phosphate pathway (for 3CO 2 ):

Sum equation of the Calvin cycle

A total of nine ATP and six NADPH must be used for every three CO 2 .

Regulation of the Calvin cycle

Light is required to activate some of the enzymes involved in the reactions. This not only includes the enzyme RuBisCO , which catalyzes the fixation itself. But also enzymes in the reductive part of the Calvin cycle (glyceraldehyde-3-phosphate dehydrogenase) and in the regenerative part (fructose-1,6-bisphosphate-phosphatase, sedoheptulose-1,6-bisphosphate-phosphatase, sedoheptulose-1,7-bisphosphate- Phosphatase and ribulose-5-phosphate kinase). In pure darkness these enzymes are inactive because the energy and reduction equivalents required for assimilation are missing. Activation takes place via the mechanism of the ferredoxin-thioredoxin system . In this case, thioredoxin by ferredoxin from the light reactions of photosynthesis of the disulfide (SS) - in the dithiol transferred (SH) form. Thioredoxin in turn reduces disulfide bridges in the various enzymes, which are thereby activated. In the dark, the dithiol form of the enzymes is oxidized back to the disulfide form by molecular oxygen. This creates water.

After every three runs of the Calvin cycle, a molecule of glyceraldehyde-3-phosphate (GAP) can be diverted from the Calvin cycle for further syntheses. A central product of assimilation in the chloroplasts of plants is starch, which is initially deposited in the stroma in the form of granules (starch grains). If necessary, carbohydrates in the form of triose phosphates are released from this intermediate storage, which are then converted in the cytoplasm to the disaccharide sucrose . Sucrose is the most important form of transport of carbohydrates, which through the sieve tubes of the phloem passes in storage organs of nonphotosynthetic cells (roots, tubers, Mark). There the sugar can be further used or stored. The recovery includes z. B. the glycolysis of non-photosynthetic tissue (and photosynthetic tissue in the dark) and the synthesis of cellulose , nucleotides and other sugar-containing cell components. When stored, starch grains (starch granules ) are formed again in shapes that are characteristic of the plant and the tissue (spherical, oval, lenticular, spindle or rod-shaped).

As mentioned in photorespiration executed, the RubisCO is at atmospheric CO 2 - partial pressure inefficient air. C 4 plants and CAM plants therefore suppress the side reaction by pre-fixing CO 2 . This is made possible by an "ATP-driven CO 2 pump". Catalyzed by a chloroplastic pyruvate phosphate dikinase, pyruvate (Pyr) phosphoenolpyruvate (PEP) is formed as the primary CO 2 acceptor . Energy is invested in the form of ATP. A cytosolic PEP carboxylase catalyzes the condensation of carbon dioxide in the form of hydrogen carbonate (HCO 3 - ) on PEP. The product is the C 4 compound oxaloacetate (OA).

The conversion of phosphoenolpyruvate (PEP) into pyruvate, a glycolysis reaction , is so exergonic that it cannot be directly reversed (ie by using only one molecule of ATP). To phosphorylate pyruvate to PEP, chloroplasts use a pyruvate phosphate dikinase ( EC  2.7.9.1 ). This enzyme has the unusual property of activating a phosphate group through ATP hydrolysis (to AMP). Mechanistically, this is done by transferring a pyrophosphate residue (PP i ) to the enzyme and its subsequent phosphorolysis according to the scheme shown in the figure.