Aldolase (extensively fructose-1,6-bisphosphate aldolase ) is the enzyme that splits fructose-1,6-bisphosphate (F-1,6-BP) into the isomers dihydroxyacetone phosphate (DHAP) and glyceraldehyde-3-phosphate (GAP) catalyzed . This reaction is a part of glycolysis and is therefore essential for the utilization of carbohydrates in all living things. Three isoforms of the enzyme are known in vertebrates , which are located in the muscles (A), the liver and erythrocytes (B) and in the brain (C) and are each encoded by their own genes . Mutations in one of these genes can lead to aldolase deficiency. For example, a lack of aldolase A can lead to rhabdomyolysis and a form of hemolytic anemia .

Aldolase B is also called liver aldolase because of its occurrence , but it is also present in the kidneys . At the same time, it takes on the function of a fructose-1-phosphate aldolase and is the oldest isoform in evolutionary terms and the one found in bacteria and plants.

Aldolase-catalyzed cleavage of fructose-1,6-bisphosphate (1) to dihydroxyacetone phosphate (2) and glyceraldehyde-3-phosphate (3)

Depending on their reaction mechanism, aldolases are divided into two classes. Class I aldolases form a protonated Schiff base intermediate that connects a highly conserved lysine of the active site with the DHAP carbonyl carbon. In addition, tyrosine residues are of crucial importance for this mechanism as stabilizing hydrogen acceptors.

Class II aldolases use a different mechanism that polarizes the carbonyl group with a divalent cation such as Zn 2+ . The Escherichia coli galactitol operon protein gatY and the N -acetylgalactosamine operon protein agaY, which are both tagatose bisphosphate aldolases , are homologues of aldolase class II. It has been shown that two histidine residues in the first half of the sequence these homologues are involved in the binding of zinc.

The protein subunits of both classes each have an α / β domain that is folded into a TIM barrel that contains the active site . Several subunits are assembled to form the complete protein. The two classes show hardly any sequence identity .

With a few exceptions, only class I aldolases were found in animals, plants and green algae and with a few exceptions only class II aldolases were found in fungi. Both classes have been found widespread in other eukaryotes and in bacteria. The two classes are often present together in the same organism. In addition to the usual cytosolic aldolase, plants and algae also have a plastid aldolase, which is sometimes a relic of endosymbiosis . A bifunctional aldolase phosphatase with a class I mechanism was found across species in archaea and some bacteria. The active center of the archaea aldolase is also located in a TIM barrel.

Mechanism of the catalyzed reaction

The reaction catalyzed by the aldolase corresponds formally to an aldol cleavage or an aldol addition. It should be noted that this is an equilibrium reaction. To accelerate the aldol cleavage of F-1,6-bP, the carbonyl- analogous, but more reactive, iminium ion is formed from the carbonyl group of the sugar via a condensation . The proton transfer through a carboxylate group further accelerates the reaction. Hydrolysis takes place at the end of the catalytic cycle . The reaction mechanism is shown in the adjacent figure. The exact mechanisms of the hydrolysis of the iminium ion or the condensation of the amino and carbonyl groups are not shown.

The amino acid side chains of aspartic acid and lysine are located in the active center of the aldolase . The amino group of the lysine side chain attacks the carbonyl group of F-1,6-bP nucleophilically. After the elimination of water, an iminium ion forms, which corresponds to condensation. The conversion of the carbonyl group (carbon double bond-oxygen) to the analogous iminium ion (carbon double bond-nitrogen) follows the logic that these are more electron-withdrawing than carbonyls, which accelerates the subsequent cleavage of the bond between C 3 and C 4 . The aldol cleavage leads to the formation of GAP and an enamine intermediate. This is protonated by the carboxy group of the aspartic acid side chain and an iminium ion is formed again. DHAP is released through hydrolysis and the lysine side chain is recovered. The catalysis of aldol additions with amines is also known from synthetic chemistry, for example in the Hajos-Parrish-Eder-Sauer-Wiechert reaction .

The isomerization of glucose-6-phosphate (G6P) to fructose-6-phosphate (F6P), earlier in glycolysis, leads to the migration of the carbonyl group from C 1 to C 2 . The usefulness of this isomerization can be seen in the aldolase reaction. An analogous aldol cleavage of G6P would result in a C 2 body and a C4 body. However, the fact that two isomeric C 3 bodies are obtained from F6P (via F-1,6-bP) , which are in an enzyme-catalyzed equilibrium, enables both cleavage products to be metabolized via a linear metabolic pathway. This minimizes the number of different reactions and thus the number of enzymes required. 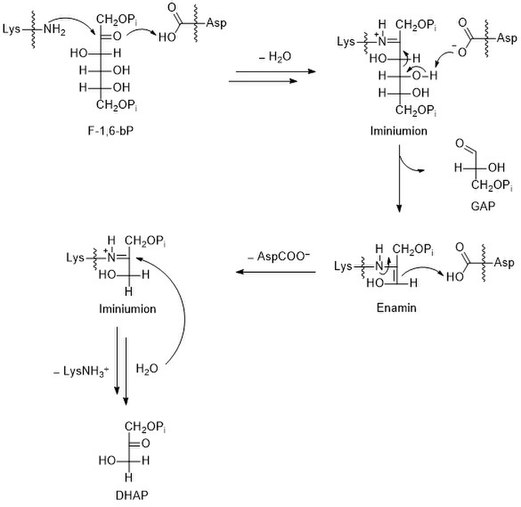 Reaction mechanism of the enzyme-catalyzed cleavage of fructose-1,6-bisphosphate.

Aldolase B has another function that is particularly important in the kidneys. There is constant reabsorption of blood components by means of endocytosis . The prerequisite for the regulation of vesicles and other cell interiors is their acidification by means of V-type ATPases , transport proteins in the respective membrane, which are assembled from several subunits. Aldolase B is essential for this assembly; this function is completely independent of the enzymatic function mentioned.