This article is about the Greek goddess. For further meanings, see Hestia (disambiguation) .

Hestia ( ancient Greek Ἑστία , Ionic Ἱστίη ; literally "hearth") is the goddess of the family and state hearth , the hearth and sacrificial fire and one of the twelve Olympian gods in Greek mythology , until she gave up her place to Dionysus .

The goddess equated with Hestia by the Romans is Vesta .

Hestia is the protector of family harmony.

She was the eldest daughter of Kronos and Rhea and sister of Zeus, Poseidon, Hades, Demeter and Hera. She was devoured by her father, but saved by the cunning of her mother and brother Zeus.

She was a virgin goddess and, like Athena and Artemis, not subject to the power of Aphrodite . When Poseidon and Apollo wooed her, she swore by the head of Zeus to remain a virgin forever. At this request, Zeus granted her perpetual virginity and assigned her an honorable place as guardian and recipient of the sacrifice “in the middle of the house”.

Ovid says that Rhea had invited the gods to a festival. After everyone had enjoyed plenty of wine and most of them had fallen asleep, the lustful god Priapus tried to rape the sleeping Hestia. The screaming of a donkey caused Hestia to wake up, everything ran into it and Priapus had to flee through the angry crowd (his cult on Lampsakos is celebrated with a donkey sacrifice).

Hestia not only kept the peace at the domestic hearth: When Dionysus was appointed god, Hestia gave up her Olympic throne to prevent a war.

Relatively little is known about places of worship and temples of Hestia. The reason may be that the hearth of every house and the hearth of the Prytaneion , i.e. the respective sacred center of the community both in the private and in the public area, were dedicated to Hestia. Her first sacrifice was due. Pausanias notes that in Olympia she was sacrificed before Zeus. Plato derives its name somewhat daringly from οὐσία ( Old Attic ἐσσ „ α : "true being", "reality") and explains that you are the first to be sacrificed, because the essence of being naturally comes first. Strictly speaking, she deserved the first and the last sacrifice, which was also related to the fact that she was the "first and the last", as the first of the children of Kronos she was also the first to be devoured by him, spat out again by him but it was last.

The domestic hearth, originally in the middle of the main room, was the place of domestic cult, here at the Amphidromia the newborn was accepted into the household, here a person seeking protection could find asylum and one could swear by the hearth. She was not only the patroness of all domesticity, according to Diodorus she is also said to have invented house building.

The goddess of the private hearth fire was also the goddess of the community hearth fire, the koine hestia as a symbol of the community of the polis . Therefore, in the Greek city-states, the Prytaneion was consecrated to Hestia, and she had an altar there on which an eternal fire was kept in her honor. The colonists moving into the distance took fire from this altar for the hearth of their future settlement. When a new city is founded (at least according to Plato's ideal), Hestia, Zeus and Athena should first be assigned a sacred area on the Acropolis (in that order) .

Places of worship of Hestia expressly mentioned by Pausanias in the description of Greece are:

The cult of Hestia is also mentioned in Larissa by Bakchylides and on Tenedos by Pindar .

In the cult she often appears together with Hera, but also with Hermes, for example in Oropos and Olympia. The Homeric Hymn XXIX is dedicated equally to both gods. You are called and invited to stay in the house and bless it. Without the wine offering for Hestia at the beginning and end of the meal, there can be no civil hospitality.

As mentioned above, the cult of Hestia was represented in a central place both in the private and in the public sector, which is used time and again as a reason for the fact that there are hardly any designated temples or shrines of Hestia: Whoever already holds the most noble place of honor everywhere, does not require any further cultic honor through temples and statues. Nevertheless, the very extensive lack of inscriptions that z. B. testify to a priesthood of Hestia, aroused astonishment.

In Athens, for example, there is not a single secure inscription that would prove a cult of Hestia. An inscription referring to “Hestia, Livia and Julia” does not belong to the Greek Hestia, but to the cult of the Roman Vesta introduced in Athens during the imperial period . Hestia priests are only known from Delos , Stratonikeia in Caria and Chalkis . Finally, in Kameiros on Rhodes , people are attested who were called damiurgoi of Hestia, and in Sparta the title hestia poleos (“Hestia of the city”) is documented several times as a female honorary title in the 2nd century . It is unclear, but unlikely, whether this was associated with an office or a public function. All in all, that is remarkably little for one of the most senior of the Olympic gods.

Dedication of the body of the Apologoi in the city of Thasos to Hestia Boulaia and Zeus Boulaios, today in the Archaeological Museum of Thasos

In contrast, the public cult of Hestia Prytaneia in the Prytaneion, the seat of the city government, and of the Hestia Boulaia in the Buleuterion , the seat of the city ​​council , is well and frequently attested, from which it could be concluded that the cultic obligations of the Hestia are part of a public office was, for which there is also corresponding evidence in Dionysius of Halicarnassus and Aristotle . 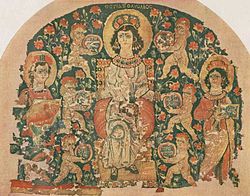 Corresponding to the pure and chaste nature of the goddess, she was shown sitting or standing quietly with a serious expression on her face and always fully clothed. On the whole there were few statues of Hestia in antiquity, the most famous of which was that of Scopas . Hestia has not yet been reliably proven in surviving statues; one usually refers to the so-called "Hestia Giustiniani" in the Museo Torlonia in Rome, a female robed statue of a strict style, for example from the time of the gable figures of the Temple of Zeus in Olympia and related in shape. On Roman coins she appears with the palladion and simpulum .

Since Hestia is not identified in depictions by an attribute specific to her (such as the trident of Poseidon or the hammer of Hephaestus ), an assignment is usually only certain if the person portrayed (e.g. in vase painting) is written with her name is clearly identified. The assignment is also difficult because Hestia was apparently also shown winged, which makes it difficult to distinguish between Hestia and the winged iris .

In the cosmology of the Pythagoreans (e.g. Philolaos ), the hestia is the (invisible) central fire around which the planets (including the sun) circle in a heptachord , which create the harmony of the spheres through this circular movement . Of course, it cannot be said without further ado that these cosmological speculations also associate the goddess and not just the abstraction fire. Two epigrams of the Claudia Trophime, 92 AD, Prytanis of Ephesus , prove that the connection was actually established . The first is:

“She [Hestia] has given the gods their meals (food and drink), she maintains the blooming fire of the hometown; dearest goddess, blossom of the universe, eternal fire, goddess, whom you maintain on the hearth altar the fire blight that comes from heaven. "

The coming of Plato derivation was already mentioned the name of Hestia of οὐσία and justified thereby equating Hestia with the essence of being, the true reality. The same correspondence can be found later in Plotinus , where the equation to unity ( monad ) = being = Hestia is expanded.

The speculation emanating from the Pythagoreans has blossomed into German idealism . With Schelling she tries to get back to the scientific roots:

“The ancients worshiped the general substance under the name Vesta (Hestia) and this themselves under the symbol of fire. You have left us a hint that the fire is nothing more than the pure substance breaking through in the physicality or third dimension, a view that gives us some light for the time being about the nature of the combustion process, the main phenomenon of which is fire. "

The goddess Hestia is one of the main characters in the novel, manga and anime series Dungeon ni Deai o Motomeru no wa Machigatteiru Darō ka . There she is represented as a petite, young woman and is one of the gods who descended into the human world out of curiosity.