The title of this article is ambiguous. Further meanings are listed under Pindar (disambiguation) . 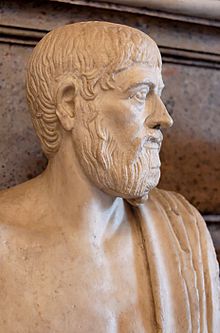 Pindar, replica from Roman times based on a Greek original from the 5th century BC Chr.

Pindar ( ancient Greek Πίνδαρος Píndaros , Latinized Pindarus ; * 522 or 518 BC in Kynoskephalai near Thebes ; † after 446 BC ) was a Greek poet and belongs to the canon of the nine lyric poets .

Pindar came from the noble, cosmopolitan Aegid family, which enabled him to complete part of his poetic and musical training in the democratic (and thus hostile to Thebes) Athens . The earliest surviving poem dates from 498 BC. Pindar achieved his first victory in the Dithyrambenagon as early as 497/96 BC. As a young man, he was considered an important cult poet, as evidenced by his relationships with the influential priesthood in Delphi . Distinguished and wealthy competition winners (e.g. from the island of Aigina , from Thessaly , Orchomenos , Athens and Thebes) ordered choral songs from him.

In the time of the Persian invasion (490-480 BC) the aristocratic Thebes fought on the side of the Persians in the hope of the subjugation of Athens . Pindar, who clung to the aristocratic ideals until his death but also felt himself to be a Hellene , resolved the conflict by retreating to friends on the island of Aigina. After defeating the Persians, Pindar returned to Thebes, which had been spared from destruction. He later paid tribute to Athens' role in the liberation of Greece from the Persians. Athens, for its part, valued Pindar's artistic achievement.

Pindar saw his stay in Sicily from 476–474 BC as the high point of his career . Chr. The art-loving tyrants Hieron I of Syracuse and Theron of Akragas ruled here, and Pindar wrote some poems about their victories in the chariot race . At the royal courts he met Simonides and his nephew Bakchylides , both important choral lyricists; but even his contemporaries considered Pindar the most important of the three.

After his return from Sicily, Pindar worked for Arkesilas of Cyrene and for the King of Rhodes . From this time there are fragments of a Paian that Pindar met on the occasion of the total solar eclipse of April 30, 463 BC. Composed.

Statements about Pindar's own attitudes and personal feelings can of course be doubted, since they are only obtained from the statements of the first-person speakers in Pindar's poems, which were not infrequently paid commissioned works.

One has to imagine Pindar's poems as choreographed cantatas that were performed as part of a cult or a celebration by a male or female choir with instrumental accompaniment. These were “ total works of art ” for which Pindar not only wrote the texts, but also composed the music (except for a fragment that is controversial in its authenticity, but completely lost) and created the choreography (also not handed down); often he even staged the performance himself.

The subject of his victory songs is the praise of the winner and his family, often presented with the greatest artistic effort, but also the praise of the poet and poetry. In keeping with the cultic and metaphysical dimension of this lyric poetry, stories about gods and mythical heroes occupy a large space. The traditional Doric language of this poetry is solemn, sought-after, sometimes even dark.

Only the Epinikia are completely preserved, the other books only fragmentarily. The most extensive fragments are from the book of the Paiane in honor of Apollo .

Although choral lyric poetry soon experienced its decline after Pindar's death, the poet's fame endured for a long time. The Alexandrians researched Pindar's extensive work, arranged and published it in 17 books: a book of hymns of the gods, a book of Paiane , two books of dithyrambs , two books of prosody ("processional songs"), three books of Parthenia , two books of hyporchemata ("dance songs"), one book Enkomia , one book Threnoi and four books Epinikia (odes to winners of the Olympic, Pythian, Nemean and Istrian games).

When Alexander the Great in 335 BC When Thebes was razed , he only spared Pindar's house in addition to the temples. The Romans, especially Horace and Quintilian , saw in Pindar's poetry the absolute, no longer attainable climax of a tradition that belonged to the past. 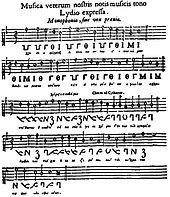 Allegedly the original setting of an ode by Pindar, in Athanasius Kircher's Musurgia universalis , 1650

The humanism discovered Pindar from the 16th century again and made him the lyrical model. In 1515 the Cretan Zacharias Kallierges published the first edition of Pindar in his printing press, which was newly founded in Rome. Pierre de Ronsard and Abraham Cowley , for example, provided important post-poems . Herder and Goethe initiated its reception in the German-speaking area in the 18th century. The most important German Pindar translator is Friedrich Hölderlin . His somewhat experimental translation attempted to recreate Pindar's idiosyncratic language verse by verse and (mostly) sentence by sentence in German. The result can only be used to a limited extent as a translation in the usual sense, as it is often difficult to understand and incorrect in detail, but it has a high poetic appeal. Hölderlin's own metrically free chants (also called hymns ) were decisively influenced by his Pindar translation.