from Wikipedia, the free encyclopedia
f9

Argos ( Greek Άργος ( n. Sg. )) Is a Greek city ​​in the northeast of the Peloponnese , which was founded about 5000 years ago and was shaped by Greeks, Romans, Byzantines, Venetians and Turks. The city itself has around 22,000 inhabitants today, with the surrounding towns in the city district 22,600. Argos is considered to be the oldest continuously populated city in Europe .

Argos is the capital and namesake of the Argolis district . The city is surrounded to the north and east by the Inachus , which flows south of it into the Argolic Gulf .

Argos is an important city in Greek mythology . According to legend, Danaus was made ruler of the Argolis after his flight from Egypt. His descendant Adrastus became the leader of the Seven against Thebes . In Homer's epics , Diomedes becomes king of Argos. Originally Argos is said to have been called Phoroneikon , after Phoroneus , the grandfather of Argos and mythical founder of the first trading colony in the Peloponnese .

See also the list of the mythical kings of Argos . 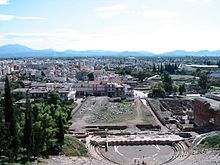 Argos, view of the city from the upper tiers of the ancient theater

The oldest traces of settlement go back to the end of the Neolithic . In the Mycenaean period a castle was built on the mountain. The Dorians also left their mark, primarily through settlements and a shrine to Apollo .

Map of the Peloponnese in Classical Time

In archaic times , Argos was considered to be the economic, artistic and political dominance of the Peloponnese . All three positions passed in the 6th century BC. Chr. Lost. Since the 6th century it has always been in the shadow or rivalry with Sparta . The disputes can be traced back to the 8th century BC. Trace back to BC. The defeats against Sparta in 546 BC In the Thyreatis , 494 BC At Sepeia and 418 BC. At Mantineia , Argos keep a watchful eye on Sparta in constant opposition. During the Persian Wars , Argos was neutral. A democratic constitution and concluded in 451 BC. A 30-year peace with Sparta in order to take sides for Athens in the Peloponnesian War , but this was of no use to Argos. A merger with Corinth around 392 BC. BC did not lead to success: The state association was founded as early as 386 BC. In the peace of the king dissolved again.

In the time after Alexander the Great , Argos remained an important city, which, however, came under changing political influences until it became relatively insignificant in Roman times (from 27 BC).

Argos had around 500 BC. Around 30,000 inhabitants who could rely on a functioning sewerage system. Not far from the city was the Heraion of Argos , one of the most important Panhellenic sanctuaries.

Argos was plundered by the Herulers after a long period of peace in 267 , then by the Goths under Alaric I in 395 and by Slavic tribes in 586 , but it was always settled and was able to regain a certain political importance as a bishopric at the latest in the 5th century . 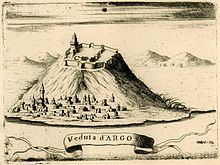 From the 12th century onwards, Larissa Castle was fortified on the mountain and developed into the strongest defensive structure in the Peloponnese. The subsequently changing owners, Franks and Venetians, remained until the city was conquered by the Turks in 1463. The reconquest by Venice under Doge Francesco Morosini (1686–1716) could not change the rule of the Turks until 1821.

The first Greek National Assembly was held in Argos after the Greek reconquest until Nauplia became the seat of government in 1829.

Armor of a hoplite in the Archaeological Museum (8th century BC)

The theater carved into the rock is impressive (built around 300–275 BC), which held 20,000 spectators and where numerous performances take place again today. Below the theater are the best-preserved remains of thermal baths on Greek soil (1st to 2nd century AD). On the agora, which was overgrown until 1998, there were, among other things, some columned halls (stoai) from the 5th century BC. Chr., A racetrack and the well-preserved rotunda of a Nymphaion , which was converted into an ordinary well house in 200 AD. In the Archaeological Museum there is a fragment of a crater from the 7th century BC. It is worth mentioning BC, which shows the blinding of Polyphemus by Odysseus , as well as the only completely preserved armor from the Geometric period (8th century BC). The castle Larissa on the highly visible hill dates back to the Mycenaean period.