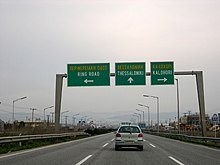 Greek toponyms , i.e. the proper names of geographical objects in modern Greek , have some linguistic and grammatical peculiarities.

They always have a grammatical gender ( gender ) and are sometimes also in the plural . Like all Greek proper names , they are declined with the definite article.

A considerable part of the toponyms for Greek places are derived from ancient Greek names. Some of them cannot be explained from Greek roots; they must have come from pre-Greek, possibly non- Indo-European languages ​​into Greek, which were often referred to as "Pelasgian" after the ethnonym Pelasger , which was taken over from ancient Greek . These include toponyms such as Korinthos ( Κόρινθος , Korinth ) or Parnassós ( Παρνασσός , Parnassus ). Further origins can be found in the languages ​​on the edge of the ancient Greek-speaking area, such as the river names Στρυμόνας ( Strymonas ) and Άρδας ( Ardas ), which come from Thracian .

As in the case of Athens, many ancient Greek place names continued to be used until modern times. Other ancient cities or new foundations from the period between late antiquity and the founding of the modern Greek state were given names in the Middle Ages and modern times that came from the languages ​​of the conquerors or immigrants and were not regrecised until after 1832.

Many Greek Toponyms existed after 1832 in two forms of speech, wherein the Katharevousa form sometimes received the plural which had given long in the vernacular (z. B. Ἀθῆναι Athine (f. Pl.) Vs. Αθήνα Athina (f. Sg. )).

The city of Heraklion, for example, was called Ἡρακλεία (Hērakleia) by the Dorians in ancient times , which is the feminine form of the adjective for the name of the ancient hero Heracles and thus means "the Heraklian" or "Heracles city". After the conquest by Arabs in 824, they named the place Arabic  خندق( Ḫandaq , "ditch"), from which Greek Χάνδαξ (Chándax) or Χάνδακας (Chándakas) became. The Italianized version of this name under the later ruling Venetians, Candia , was carried over to the entire island of Crete. After the conquest by the Turks, the modern Greek name Μεγάλο Κάστρο appears next to the Turkish form Kania ( Megálo Kástro "large castle"; kastron is borrowed from the Latin castrum ). After Crete was annexed to Greece in 1913, based on the name of a Roman port called Heracleum near the ancient city, the high-language neuter singular form neuerράκλειον (Iraklion) was adopted as the new name.

Toponyms of non-Greek origin (especially Albanian , Slavic and Islamic origin) have been largely replaced by Greek in modern Greece, unless their origin is veiled. Some names of mainly small places have been preserved:

After the population exchange between Greece and Turkey in 1923, there were numerous new establishments with place names from the old settlement area. They often have the addition Neos or Nea ("new"), e.g. B. Nea Ionia "New Ionia", Nea Alikarnassos "New Halicarnassus" or Neos Kafkasos "New Caucasus".

On the occasion of the great Greek community reform of 1997, which as the "Ioannis Kapodistrias Program" summarized the 5775 communities to 1033 to date, and the 2010 Kallikratis reform , which reduced their number to 325, numerous names were created for the newly created communities are not genuine village or city names. Today, numerous municipal districts and communities bear the names of landscapes ( Oropedio Lasithiou " Lasithi plateau ", Notia Kynouria "South Kynouria"), mountains (Erymanthos, Agrafa), rivers ( Geropotamos , Evrotas ), ancient sanctuaries or cities in the municipality ( Asklipiio , "Asklepieion"; Archea Olymbia "Ancient Olympia") or famous personalities ( Nikos Kazantzakis , Aristotelis ).

For many Greek place names there are two or more variants, which on the one hand essentially correspond to the colloquial and now officially established standard language (English Standard modern Greek ), on the other hand to an outdated language usage, the former official language Katharevousa , which was valid until 1976 , which has a historicizing orthography and This was based on grammar, which is still used by the responsible Ministry of the Interior to this day, especially for regional authorities. Usually the names differ only slightly from each other, mostly only the endings are affected (e.g. Rethymn o ↔ Rethymn on, Kalambak i ↔ Kalambak io ↔ Kalambak ion ). The older name variant has often been adopted in many foreign languages ​​and is therefore more common in international use (e.g. in air traffic) than the modern Greek name. Some foreign travel guides and maps also still orient their transcriptions according to the older naming or according to the transcription of the corresponding ancient Greek name. Although the abolition of Katharevousa as the official language was more than three decades ago, the antiquated names are still used in Greece even on occasions where you want to emphasize a special solemnity. The Katharevousa names can still be found on old traffic signs, mostly still with the diacritical marks of the polytonic orthography that was abolished with the spelling reform of 1982 . While the use of the antiquated city names usually does not run into any problems of understanding among the local population, the earlier official names of villages are not understood straight away.

In the modern Greek language , the gender of a proper name or place name is expressed in almost all sentence structure variants by the article, unambiguous ending morphemes are often given with names, but not always. For sentences like "... is a beautiful city / island", the gender and number of the place name must be known in order to be able to say the sentence grammatically correct.

Some place names of the same name can only be distinguished by their gender, for example there is a village "i Myrthios " in southern Crete , and in the middle of the island there is a male "o Myrthios" of the same name. Since the grammatical gender cannot be read from the ending of the word in all cases, Greeks also have to memorize it together with the name. This is not unreasonable insofar as in Greek names - including the proper names of people - always (except in the case of direct address) always appear with the corresponding article. So we do not say "I give Kostas a book," but "I give the Kostas a book." However, especially in the spoken language, the article is often left out of prepositional constructions with place names: πάω Αθήνα (“I'm going to Athens”), σήμερα φεύγω για [την] Καβάλα (“Today I'm leaving for Kavala”).

The end of "the myths"

The gender of the two largest cities in the country, Athens and Thessaloniki , is the feminine (in the singular), so one says in Greek η Αθήνα ( i Athína , "the Athens") and " Είμαι από τη Θεσσαλονίκη " ( Íme apo ti Thessaloníki , "I'm out of Thessaloniki"). Heraklion on Crete , however, is neuter: " Μένω στο Ηράκλειο " ( Meno sto Iraklio , "I live i m Iraklio"); Chania , the second largest city in Crete, is an example of a neuter plural form: " Πάω στα Χανιά " ( Pao sta Chaniá , "I'm going to the Chania s ").

All genera and numbers possible in the Greek language occur in place names:

Some common names in German or English for Greek cities have retained plural forms of ancient Greek or Katharevousa , which have disappeared in today's Greek, as loan translations, e.g. B. Patras (fem. Pl.) For old Gr. Πάτραι or English Athens ( Ἀθῆναι , fem. Pl.).

Especially with many names of villages and small towns, it is noticeable that they are derived directly from a place or field name, the grammatical gender of which they have adopted in most cases. Unlike the Germans, the word origin of the name is often transparent: Βρύσες Vrises "well", Παλαιόλουτρα Paleoloutra "old source" Πλατάνες Platanes "plane" Ιεράπετρα Ierapetra "holy rock" Μεγαλόκαμπος Megalokambos "large field", Δάφνη Dafni "Laurel" . In addition, there are very many Greek toponyms that come from the world of Orthodox Christianity: Άγιος Βασίλειος Agios Vassilios “St. Basil " Άγιοι Ανάργυροι Agii Anargyri (about :)" the free acting saints " Άγιοι Πάντες Agii Pantes " All Saints " Προφήτης Ηλίας Prophet Elias " Elijah " Παντοκράτορας Pandokratoras " (Christ) Almighty, "etc.

An orthographic peculiarity results from the colloquial name of the Greeks for Istanbul / Constantinople , the short form Πόλη ( Póli , "city") from Κωνσταντινούπολη (Konstandinoupoli) . In Greek nouns are written in lower case, names are capitalized. But since "the city", when referring to Istanbul or Constantinople, has a name character, it is always capitalized: η Πόλη , " the city ​​par excellence: Constantinople".

Non-Greek place names are also given a grammatical gender in Greek, many even with a Greek declension ending and declined, as are numerous German cities, whose respective Greek gender mostly corresponds to that of the Latin or Romance names.

In Greek, island names, like the ancient Greek word νῆσος (nēsos) for "island", are usually feminine, even if the ending ( -ος ) belongs to the mostly masculine o-declension:

Only in a few exceptions are island names not feminine:

Also country names in Greek have - as in English the Sudan, the Switzerland - a particular grammatical gender, plurals result from some self-designations of States ( οι Κάτω Χώρες i Káto chores , f Pl - "the Netherlands";.. Οι Ενωμένες Πολιτείες της Αμερικής - "the United States of America"). Many countries or states have the ending -ία and are feminine ( η Ιταλία i Italía , "Italy"; η Γερμανία i Germanía , "Germany"; η Γαλλία i Gallía , "France"), but there are also masculine ( ο Καναδάς o Kanadás , "Canada") and neutral forms ( το Ιράν to Irán ).