Samothraki ( pronunciation : [ samɔˈθrakʲi ]; ancient Greek Σαμοθρᾴκη Samothrákē , Ionic Σαμοθρηΐκη Samothrēíkē , modern Greek Σαμοθράκη ( f. Sg. ), 'Thracian Samosä ', Turkish Semadirek island ) is a native Greek island of Aegean . Geographically and historically, the approximately 180 square kilometer island belongs to the Thrace region , politically it belongs as a municipality (dimos) to the Evros regional district of the East Macedonia and Thrace region . According to the 2011 census, the island has 2859 inhabitants. The main town is Samothraki , also colloquially Chora , the ferry port is in Kamariotissa .

Since about 6000 BC Samothraki is settled. From about 2600 BC. From AD 400 to AD 400, the island was of national importance. The "sanctuary of the great gods" was dedicated to the Kabiren cult. The remains of towers and fortresses bear witness to their important role in maritime trade from Byzantine to Ottoman times. Samothrace became part of the modern Greek state in 1912.

The island is known as the site of the Nike of Samothrace , a famous sculpture of the Greek goddess of victory.

The 180,364 square kilometer island of Samothraki is located off the Bay of Saros in the Thracian Sea in the northeastern Aegean . The shortest distance to the mainland south of the Evros Delta is 36 kilometers northeast and 45 kilometers east to Cape Suvla on the Gallipoli peninsula and the city of Alexandroupoli about 43 kilometers north. The nearest islands are Gökçeada 25 kilometers and Limnos 54 kilometers to the south.

On the longitudinal axis in west-east orientation, Samothrace reaches its maximum extent of over 22 kilometers. The widest point in the center of the island is about 12 kilometers. The topography is shaped by the Fengari massif ( Φεγγάρι Όρος ) in the center of the island. The main ridge is oriented from north-northwest to south-southeast. The highest peak Marmara ( Μαρµαρά ) reaches 1611 meters. Neighboring peaks are the Louloudi ( Λουλούδι ; 1475 meters) southeast and the Agios Georgios ( Άγιος Γεώργιος ; 1455 meters) northwest. The Ai-Lias ( Αϊ-Λιας ; 1403 meters) lies on the side ridge facing southwest . To the east, 11 km away, is the uninhabited island of Zourafa , which has a lighthouse.

In contrast to the steep and rugged mountains in the interior of the island, the coastline of Samothraki is largely flat. Only the southeast coast at Cape Kipos ( Ακρωτήρι Κήπος ), where the Fengari massif reaches close to the sea, is characterized by steep, difficult-to-reach cliffs. Otherwise, the shoreline consists of pebble beaches and the sandy beaches of Pachia Ammos ( Παχιά Άμμος ) and Vatos ( Βάτος ) on the south coast for almost the entire length .

According to Homer , the Greek god of the sea Poseidon is said to have observed the battle of Troy from Mount Fengari ( Greek Φεγγάρι , 'moon', also called Saos ) (cf. Iliad ); in fact, with good visibility, you can see far into Asia Minor from the summit.

The Argonauts passed Samothrace on their legendary journey to the Golden Fleece on the Caucasus.

"When the evening star lowered, they landed on Orestes' advice on Electra's island, the daughter of the Atlas ,
so that they could learn secret laws there in mild consecration and then cross the gruesome sea tide safely."

Due to its location, the island played an important role on the sea routes between Europe and Asia and between Thrace and the islands of the Aegean Sea. The earliest settlement of Samothraki dates back to the late Neolithic . The first settlement around 5,000 BC. BC was on a hill west of a lagoon that existed at that time. The settlement area of ​​the Toumba of Mikro Vouni on the southwest coast was about one hectare. Nine settlement phases could be proven. According to Mikro Vouni III (SN), a gap in settlement activity is assumed, which occurred in the Early Bronze Age around 2800 to 2500 BC. Started again with Mikro Vouni IV and lasted until the Middle Bronze Age . The most recent settlement phase also represents the heyday. The finds of clay seals that are to be classified according to MM II are remarkable for the North Aegean .

Ancient Samothráke has been located at a point that is important for nautical science and long-distance trade: Since there is a constant ocean current from the Dardanelles into the Aegean Sea , the sailing ships gathered here to wait for a favorable wind for the passage into the Black Sea. This made them easy prey for pirates.

Samothrace belonged to Thrace and, according to Herodotus , was colonized by the legendary Pelasgians , and according to other sources by Dardanos with Arcadians and Troans. Both details are legendary. A colonization by Aioler from Lesbos around 700 BC is historically certain . BC, who founded a Greek city-state ( Polis ) on Samothrace . They met the Thracian tribe of the Kabeiroi , who continued to settle there and was only slowly Graecised : there are several hundred Thracian inscriptions from the island from the Hellenistic period .

In the Battle of Salamis (480 BC, Second Persian War ) the inhabitants of Samothrace fought like most Thracians on the side of the Persians , after which they became (tributary) allies of the victorious Athenians until their defeat in the Peloponnesian War against Sparta .

After the conquest of the Persian Empire by Alexander the Great , in Hellenism , Samothrace was an important sanctuary for the Dioscuri (who protected seafaring) , which was richly endowed by the Egyptian pharaohs from the house of Ptolemy (who were interested in geostrategic interest) ; so it was also an important trading center (see Delos ). With the end of the Diadochian Empire, the island came under Roman rule. In the first century BC, after the Marian civil wars, the temple area, which was rich in votive offerings, was plundered by pirates.

In the Acts of the Apostles (Acts 16:11) Samothrace is mentioned by name: "We drove from Troas on the shortest route to the island of Samothrace, and on the second day we reached Neapolis ".

After the fall of the Roman Empire , Samothrace was under Byzantine , Venetian and Genoese rule. From 1457 the island belonged to the Ottoman Empire and until the beginning of the 20th century to the Vilayet Dschesair , the Turkish name of the island is Semadirek . As a result of the Balkan Wars , Samothraki fell to Greece in 1912 and was under Bulgarian sovereignty from 1941 to 1945. According to the Treaty of Lausanne and the Treaty of Montreux , the island is demilitarized.

The search for income and a better future led many people to Stuttgart from the 1960s onwards , where there is a large community abroad. They often return to the island to visit relatives during the summer months and to exercise the right to vote. Due to migration, many people speak German and, in contrast to Greek traditions, have developed an ecological awareness. 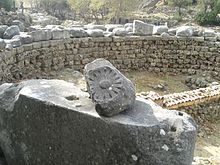 Arsinoeion (large rotunda) in the cult site of the great gods

Samothrace gained fame through its mystery cult and the mystery shrine of the great gods, the Kabiren ( Kabeiroi ), which dates back to the oldest times and was equal to the Eleusinian in respect. In the sanctuary of the great gods (Kabiren sanctuary ), the Thracian mother goddess Axieros as the mistress of nature, the underworld deities Axiersos and Axiersa and the vegetation god Kadmilos were worshiped in addition to the Kabiren themselves .

Panoramic view of the Hieron in the Kabiren Shrine in Samothraki, August 2001

The ancient city of Samothrace was on the north coast; inland from it to the south (in a typical escape from pirates) was the later main town of Kastro . The Austrian excavations by Alexander Conze in 1873 and 1875 found the remains of a Doric marble temple and a rotunda from the 3rd century BC in the old town. And other magnificent buildings uncovered. The most important find was the sculpture of the " Nike of Samothrace " discovered by Charles Champoiseau in 1863 (around 190 BC). The original is now on display in the Musée du Louvre in Paris , casts are in the atrium of the main building of the TU Berlin and in the atrium of the main building of the University of Zurich . Architectural samples can be seen in the Ephesos Museum in Vienna.

The Nike of Samothrace , the goddess of victory, was later often the model for replicas of the Nike and the Roman Victoria (for example: Victory Column and Brandenburg Gate in Berlin).

Reception area for the cult of the great gods.

In the vicinity of the Kabiren shrine , the Anáktoron , the Arsinóeion , the Témenos , the New Temple , the Hall of Consecrations , the Propylon of Ptolemy , the Stoa as well as the theater and an important necropolis were uncovered by archaeologists.

Finds from the excavation area are housed in the Museum of Palaiopolis near the sanctuary; In addition to vases, inscriptions and sculptures, there is also a replica of the famous Nike.

After Samothrace had been assigned to Greece as a result of the Balkan Wars , the island formed from 1913 together with the islands of Lesbos , Imvros , Limnos and Tenedos the prefecture of Mytilini ( Νομός Μυτιλήνης ). It was divided into two rural communities, Samothraki ( Κοινότητα Σαμοθράκης Kinotita Samothrakis ) and Xiropotamos ( Κοινότητα Χηροποτάμου Kinotita Xiropotamou ). When parts of Thrace were annexed to Greece in 1923 , Samothraki was added to the Evros prefecture ( Νομός Έβρου ) and in 1927 the two rural communities were merged to form the rural community of Samothraki . In 1986 the island received municipal status ( Δήμος Σαμοθράκης Dimos Samothrakis ).

After the population peaked at over 4,200 in 1951, a wave of labor migration from the 1960s onwards led to a steady decline in the population.

Due to the central location and the height of the Fengari massif , different landscapes have developed on the north-north-east and south-south-west sides. While on the north side forests with old trees, fruit cultures, dense bushland and partly all year round water-bearing torrents dominate, on the opposite side maquis , arable land and olive groves dominate the picture.

The southeast coast of the island consists of up to 800 m high rock walls and is not accessible by roads. In the north there are still downy oak forests from a height of 800 m ( Quercus pubescens , partly primary), in the south there are stocks of Turkey oak ( Quercus cerris ). The oriental plane tree ( Platanus orientalis ) grows in the streams that flow all year round in the north of the island . Some specimens have very peculiar growth forms due to centuries of snow . Allegedly there are still populations of the original domestic goat in the south-eastern mountain region ( Bezoar goat ).

A large number of goats are kept semi-wild, which has led to an enormous overpopulation, mainly because of the EU subsidies for goat breeding. At the end of the 20th century there were around 75,000 goats on the island. The number of goats has now fallen below 50,000, also because there are only a few areas left on which they can graze. Because the goats had left no vegetation on many slopes and the vegetation was also unable to recover, soil erosion was increased and there is nothing that can stop mudslides. Landslides like the one the island suffered in 2017 when mud flows destroyed many streets and the town hall are therefore occurring.

The snowdrop species Galanthus samothracicus occurs only on Samothrace.

In 2012 Samothraki was awarded the QualityCoast award for special efforts in sustainable development. Therefore Samothrace has been included in the global atlas for sustainable tourism, DestiNet . Today the island is a popular holiday region for fans of modern hippie culture .

Samothrace is located on the Eurasian Plate in the North Aegean Sea on the southern plate boundary with the Anatolian Plate . The surface of the island consists predominantly of igneous rocks ( granite , basalt ) in the central area , in the area of ​​the coast of rubble and younger volcanic rocks (ash).

Municipalities of the East Macedonia and Thrace region