The Dardanelles , the Sea of ​​Marmara and the Bosphorus create a connection between the Aegean Sea and the Black Sea .

The Treaty of Montreux (also Straits Agreement , officially in French Convention sur le régime of Detroit ; English Convention Regarding the Regime of the Straits ) of 20 July 1936 gave Turkey the full sovereignty over the Dardanelles , the Sea of Marmara and the Bosphorus back . It is still in force today and regulates the free movement of ships through these waters. The treaty was drawn up in French and has been deposited with the Republic of France by the contracting states.

After the defeat of the Ottoman Empire in World War I , the straits between the Mediterranean and the Black Sea came under international control in the Treaties of Sèvres in 1920 and Lausanne in 1923, which was exercised by a Commission of the League of Nations . The Straits Commission consisted of the Black Sea bordering Bulgaria , Romania , the Soviet Union and Turkey as well as France , Greece , Great Britain , Italy , Japan and Yugoslavia . The strategically important straits were also declared a demilitarized zone . The Montreux Treaty replaced the Lausanne Agreement.

The revision of the treaty came about on the one hand at the urging of Turkey to exercise sovereignty over its national territory, on the other hand through power-political considerations during the increasing international tensions of the 1930s; Turkey should be won over as a possible ally in a future conflict through concessions. The main subject of the negotiations was the passage of warships through the straits. The negotiations were mainly conducted by Turkey, Great Britain and the Soviet Union; other contractual partners were France, Greece, Bulgaria, Romania, Yugoslavia and Japan. Italy and the United States did not take part in the conference.

The contract consists of 29 articles, four annexes and a protocol. Articles 2 to 6 regulate civil shipping, Articles 7 to 22 regulate warships. 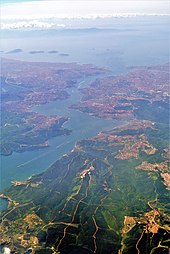 Looking south over the Bosphorus

The straits are considered an international shipping route ; under Article 2, merchant ships , regardless of their cargo or flag , shall have free passage during peacetime. The Turkish authorities can only carry out sanitary or security checks and levy fees, but cannot prohibit passage. In times of war, all trading ships of states that are not at war with Turkey are allowed to pass, but are not allowed to help an enemy of Turkey.

Special rules apply to warships. In peacetime, Turkey must be notified of the passage of a warship through diplomatic channels in advance, usually eight days in advance. Warships from states that are not neighbors of the Black Sea may not stay in the Black Sea for more than 21 days. The tonnage of warships of the non-bordering states, which simultaneously sail through the straits, must not exceed 15,000 tons (Articles 11 and 14). Furthermore, surface warships with a displacement of more than 10,000  ts and submarines from countries that do not belong to the countries bordering the Black Sea, as well as aircraft carriers in general, are not allowed to pass through the strait. If Turkey is at war, the agreement leaves the passage of warships entirely at the discretion of the Turkish government.

During World War II , the Treaty of Montreux prevented Axis warships from sailing through the straits to threaten the Soviet Union. After protests in Moscow and London, Turkey prevented the passage when smaller armed ships increasingly tried to do so. After the Second World War there were repeated disputes about the interpretation of the treaty with regard to the passage of heavy American warships and whether the Soviet flight deck cruisers were to be classified as aircraft carriers within the meaning of the treaty (which implied a relocation of these warships from the shipyards and ports the Black Sea coast to the Mediterranean and back).

In connection with the Treaty of Montreux of 1936, there is a dispute between Turkey and Greece about the status of the islands in the eastern Aegean ( Limnos , Samothrace , Gökçeada , Bozcaada , Tavcan ) that were demilitarized by the Treaty of Lausanne in 1923 .

In the 2008 Caucasus conflict , Turkey refused US warships entry into the Black Sea because the total tonnage allowed in the treaty had been exceeded. Russia warned that the Montreux Treaty should be fully respected.

In the course of the Crimean crisis , Russian Foreign Minister Sergei Lavrov said that a US military ship had been too long in the Black Sea. Russia Today wrote that in February and March 2014 the US frigate Taylor stayed in the area for eleven days longer than the contractual 21 days. This violation of the contract was not reported by the Turkish side. The Turkish Foreign Ministry stated that the ship in question was not maneuverable due to damage to the propeller and that it was finally towed out of the Black Sea after unsuccessful attempts at repair. The member states of the Montreux Treaty had been informed of this, which did not constitute a breach of contract.