Sifnos ( Greek Σίφνος ( f. Sg. )) Is a Greek Cycladic island and is located about 130 km southeast of Athens in the Aegean Sea surrounded by the neighboring islands of Milos , Kimolos , Serifos and Paros . At the same time, it forms a municipality within the South Aegean region .

View of the village of Kamares and its port

View of the village of Apollonia 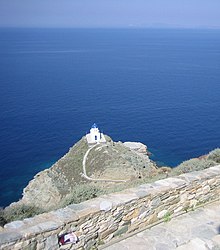 A chapel on a hill near Kastro

The mining of lead and probably also of silver on the island began in the late Neolithic shortly before the year 3000 BC. The finds are related to finds from Kephala on the island of Keos . Ceramic finds and an obsidian arrowhead are assigned to the same time.

Evidence of settlement is known from the Bronze Age . Isolated traces point to the early and middle Cycladic times , the place Agios Andreas on the summit of the mountain of the same name can only be identified as a settlement in the late Mycenaean period only from around 1300 to 1230 BC. Prove. Agios Andreas was fortified by a wall, which was also protected by towers. The settlement was repopulated in the Geometric Period and the fortifications were reinforced. Further details are hardly known, as the foundations are badly eroded due to their location on the mountain top.

In ancient times , Sifnos got rich from gold and silver mining . The residents were able to build a treasure house in the Sanctuary of Delphi . Even during the classical period, the resources were exhausted and the island became impoverished.

In the course of the Fourth Crusade, the island came into the focus of Venetian colonists, because the Cyclades - at least according to the theory of the partition treaty - were added to the Venetian Marco Sanudo. This certainly ruled Naxos, Melos and Syros, but whether he was ever able to occupy the other islands is not clear. The only other mention comes in the 1270s, when Licario, a mercenary leader from Vicenza, conquered the Cyclades and Euboea on a Byzantine mission. Sifnos was also affected. Although the sources do not provide any further facts, it is believed that between 1280 and 1307 the later dominant da Corogna family occupied the island. This is due to the fact that the archive material in question was destroyed by a fire in 1574 or 1577.

The later Doge Giovanni Soranzo was possibly the first Venetian lord of the island between 1285 and before 1310, but this in no way means that he must have been personally present on the island. It is possible that his daughter Soranza Soranzo fled to the island in 1310 after her husband had led a failed uprising, from which she returned to Venice in 1314. However, there she was locked up in a nunnery. The next to claim the island according to the sources was Bertuccio Grimani, who probably never stayed on the island. However, until the 16th century, two non-Venetian families dominated the island, namely the de Corogna and the Gozzadini. They were vassals of the Dukes of Naxos. While the Gozzadini came from Bologna, while the origin of the de Corogna is unclear.

Sifnos has 2,625 permanent residents, of which around 1,600 live in Apollonia and Artemonas, which have grown together to form a double town. Another 245 inhabitants live in the port of Kamares. From here there are regular ferry connections to Piraeus and the neighboring islands.

The former main town of Kastro is 100 meters above the steep east coast. Kastro is a fortified settlement ( called " Kastron " by the Byzantines ). The outer walls of the ring-shaped houses form the outer fortification ring.

The island is very green for a Cycladic island. Agriculture, especially olive and wine growing, still play a dominant role. The pottery, which has been located here since ancient times, is also still important. The ore mining (gold, silver and lead), which brought wealth to the island in ancient times, has come to a complete standstill. In recent times tourism has played an increasingly important role.

The pottery trade plays an important role in the life of Sifnos. The geological composition of this island contributed to the development of ceramics because its rich clay soil is an excellent raw material. Its history goes back many centuries, but it reached its peak in the 19th century when local potters exported their products across the country. Over time, potters from Sifnos have moved to other regions of Greece such as the other Cyclades islands, to Crete, Chios and Argosaronikos, taking their art and technology with them. Today, however, there are again many companies on the island that produce traditional pottery or decorative handicrafts.