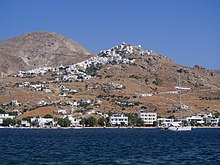 Serifos is an island in the western Cyclades, 14 km northwest of Sifnos , 13 km south of Kithnos and about 40 km north of Milos . Serifopoula, with 1.67 km² the largest island belonging to the municipality of Serifos, is 8 km northeast, Piperi is 10.5 km north and Vous is 2 km east. Other small rock islands in close proximity to Serifos are Mikronisi in the south and Sykamia in the north.

The island has an area of ​​74.331 km², its maximum length from Cape Kyklopas (Ακροτιριο Κύκλωπας) in the southwest to northeast 13 km, the maximum width from northwest to southeast about 10 km. The coastline is formed by numerous small bays and in the south by three large bays Kalo Ambeli (Καλό Αμπέλι), Koutalas (Κουταλάς) and Livadi (Λιβάδι). Serifos is traversed by a mountain range from southwest to northeast, which in the central area of ​​the island with the Troulos (Τρούλος) reaches a height of 585 m and thus represents the highest elevation on the island.

According to Greek mythology, Danaë and Perseus landed on the island after their night sea voyage in the ark in which they had been locked by Danaë's father Akrisios . Polydektes , the then king of the island, desired Danae to be his wife and was petrified along with everyone else who refused to believe that Perseus had found the head of the Gorgon Medusa . These rock formations are still shown to visitors today.

In the history of Serifos, mining played an important role over a period of five millennia. The earliest evidence of metal extraction was found on the north coast at Kephala in 1982 on a north slope exposed to the wind by the Institute of Geology and Mineral Exploration and a team from Oxford University. The site contained about 3000 tons of slag, which probably came from an early Bronze Age copper smelter. The clay chunks found are assigned to melting furnaces.

Settlement traces of the Bronze Age Cycladic culture from the 3rd millennium BC Until the late Mycenaean period around 1200 BC. Were proven on the island. The iron ore and copper deposits on the island were also exploited in Minoan times.

In the 7th century BC Chr. Populated aeolians from Thessaly and the Ionians from Attica the island. After Serifos took part in the fight against the Persians, it joined the Attic League and accepted the supremacy of Athens.

Also in 377 BC The island became a member of the Second Attic League . As early as 363 BC Conquered by the Macedonians, the island came under the control of the Ptolemies in the meantime (306–266 BC) , before being destroyed as a result of the Macedonian-Roman wars in 146 BC. Conquered by the Romans and became a place of exile for unpopular politicians, u. a. by Cassius Severus . Ore mining continued under the Roman occupation until the 2nd century AD.

Marco Sanudo integrated Serifos in 1207 into the Venetian Duchy of Archipelagos and transferred the island to Venetian noble families. The Ghisi family received half, the Giustiniani and Michieli families each received a quarter . The Ghisi family share was transferred to Bragadini in 1334 and then to others, while the Giustiniani share was transferred to the Micheli in 1412. With the new masters, ore mining was resumed on the island and intensive mining was promoted. Thousands of slaves were killed in the inhumane working conditions. A dispute over ownership of the island broke out between the Venetian families before the navy conquered Chaireddin Barbarossas Serifos in 1537 . At first the island had to pay tribute to the Ottoman Empire before finally becoming part of the Ottoman Empire in 1566. At the same time mining was stopped. The Portuguese Marrane Joseph Nasi was given the Duchy of Archipelagos by Sultan Selim II for his services . Against the background of the Russo-Turkish war , Serifos became Russian with the Orlov revolt of 1770–1774, but came back to the Ottoman Empire until 1821 through the peace of Küçük Kaynarca . As a result of the Greek Revolution , Serifos became part of the new Greek state, like the other Cyclades islands, according to the London Protocol of 1829 .

Influenced by the economic and cultural rise of the island of Syros , numerous people left the island for Egypt or settled in the Ottoman Empire. Only with the systematic exploitation of the iron ore deposits at the end of the 19th century did more people settle on the island again. The population reached about 4,400 in 1912, of which 2,000 were miners.

From 1861, iron ore mining began in the south-west near Megalo Livadi and Koutalas, which was carried out from 1869 to 1875 by a Greek mining company (Ελληνική Μεταλλευτική Εταιρεία). From 1880 three different companies tried to mine the ore deposits. After 1886 the French "Serifos-Spiliasesa Company" gradually took over the shares of the other company under the direction of the German mineralogist A. Grohmann. The company controlled the work from dismantling to loading. The ore was exported to the United States, England, Sweden and Belgium.

In the struggle to improve working and living conditions, miners organized themselves in a union in 1912. A strike broke out on August 7, 1916, when workers refused to load a ship. The demands provided for eight hours of work, a wage increase and compliance with safety measures. On August 20, Grohmann requested help from the Greek authorities. In order to prevent food and solidarity deliveries from Patras and Athens, police forces and a warship were ordered to the island. The strike escalated on August 21, 1916. When the union leaders were arrested by the police, the workers and their families gathered at the loading bridge to prevent an Austrian steamship from being loaded. After an ultimatum had expired, the lieutenant on duty gave the order to fire. Four people were killed more than 30 injured. When the people then defended themselves with stones, the mine operator had his guards shot into the crowd. The lieutenant, a non-commissioned officer and two policemen were also killed.

During the Second World War , Serifos was occupied by Italy in 1941. After the capitulation of Italy, the German occupation followed from 1943 to 1944 . After the Second World War , the Grohmanns were charged with collaborating with the Germans and had to leave the island. The Serifos-Spiliaesa company ended its activities on the island in 1951 and the mines were finally closed in 1965. The loading docks of Koutalas and Megalo Livadi, the loading station of Megalo Livadi and the miners' quarters have been declared a cultural monument.

Settlements on the island

as well as the uninhabited islands

The Taxiarches men's monastery (Μονή των Ταξιαρ Männerν) was built in 1572 near the village of Galani. Since the monastery was known for its wealth due to the large land holdings and was therefore also exposed to pirate attacks, the complex was built with a wall up to four meters high with loopholes, similar to a fortress with only one entrance. In 1617 a monastery school was founded. Until the end of the 19th century, the monastery was the religious, educational and economic center of the island. The monastery is dedicated to the Taxiarches (Ταξιάρχες, Archangels ') Michael and Gabriel , whose icons are said to come from Cyprus and are also the island saints. The frescoes of the three-nave church with dome are still partly in their original condition and depict the archangel's fight against the dragon of the Revelation of St. John. On the floor there is a marble relief with a double eagle as a symbol of the Byzantine Empire from 1659. In 1909 a library was established in the monastery.

Founded in 1976, the Folklore Museum is housed in a traditional building in Kato Chora. Most of the exhibits such as ceramics, tools, textiles and local traditional clothing come from donations from residents. Stones, minerals and semi-precious stones that are abundant on the island are shown in an adjoining room. Behind the museum there is a small theater that seats around 300 people and is used for various cultural events.

The island's Archaeological Museum is also located in Kato Chora. Pieces from the Hellenistic and Roman times, such as headless statues and amphorae, are shown from various locations on the island.

The combination of geomorphological and hydrogeological processes has created a network of habitats for flora and fauna in the south. The numerous inaccessible bays in connection with cliffs and caves offer the Mediterranean monk seals ( Monachus monachus ) an ideal retreat. In addition to the many lizards such as the giant emerald lizards ( Lacerta trilineata hansschweizeri ) and species of snakes including leopard snakes ( Zamenis situla or Elaphe situla ), Caspian brook turtles ( Mauremys caspica ) also occur. That is why the south of the island with the adjoining marine area was integrated into the Natura 2000 network of the European Union as GR 4220009 Notia Serifos (Νότια Σέριφος, South Serifos').