This article deals with the creature in general; for the representation of the Gorgon head see Gorgoneion . For other uses of Gorgons , see Gorgone .

Shield sign with Gorgon hybrid creatures . 2nd half of the 6th century BC BC, Archaeological Museum Olympia 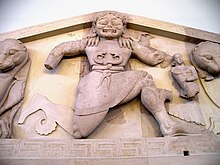 An archaic gorgon (c. 580 BC) depicted on a pediment of the Temple of Artemis in Corfu , Corfu Archaeological Museum

The Gorgons ( ancient Greek γοργόνες Gorgones from γοργώς Gorgos "terrible"), singular Gorgone ( Γοργών Gorgon ) or Gorgo ( Γοργώ ), are in the Greek mythology, three winged bogies with snake hair that anyone who looks at, turned to stone to stone.

The Gorgons are the daughters of Phorkys and Keto . Their names are: Stheno (also Stheino and Sthele ), Euryale and Medusa . Medusa is the only mortal among them and was beheaded by Perseus . The head of this gorgon was brought to the goddess Athena . Numerous portraits of Athena show her with the Aegis and the Gorgon head on her breast.

Homer still speaks of only one Gorgon. Hesiod mentions around 700 BC Then, however, three Gorgons, namely Stheno (the mighty one), Euryale (the long jumper) and the "long-suffering" Medusa (the queen). Their home was the furthest western edge of the then known world (the Atlas Mountains ), later mythographers also call Libya their home.

With the Hellenism the tradition arose that the Gorgon was originally the sister of Alexander the great . In it she is a mermaid who lives in the water and asks the crew of every boat that passes by if Alexander is still alive. If the answer is “no”, she pulls the ship and the seamen down to her. The information that keeps the skipper his life is: “He lives and rules as king!” ( Ζεῖ καὶ βασιλεύει Zei kai basileuei ).

In ancient times and since the Renaissance , images of the Gorgon head - called the Gorgoneion - can be found on protective shields, amulets and gravestones because of its alleged apotropaic effect . Gorgon heads attached to buildings and vessels are also common and are intended to protect against unauthorized entry or access. In Greek mythology, Gorgon blood, which was taken from the right half of the body, brought the dead back to life, whereas blood taken from the left half of the body was said to have an acute, guaranteed fatal effect.

In 1884 the Greek poet Georgios Drosinis wrote his poem The Gorgon , in 1949 the writer Stratis Myrivilis wrote the novel The Madonna with the fish body ( Η Παναγιά η Γοργόνα I Panagia i Gorgona ). The theme was also reflected in new music, for example Christopher Rouse composed his symphonic poem "Gorgon" in 1984, and Stacy Garrop dedicated the first movement to Medusa in 2007 in her "Mythology Symphony".