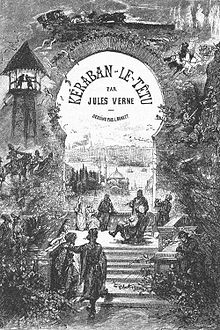 After a marital dispute, the Dutch tobacco dealer Mijnheer Jan Van Mitten flees from Rotterdam to Istanbul with his servant Bruno , where he visits his friend and business partner Keraban . Keraban's business premises are in the part of Istanbul in Europe. Van Mitten and Bruno meet him there.

Keraban invites you to dinner in his villa, which is located in the Asian part of Istanbul - Scutari (Üsküdar). The European and Asian parts of Istanbul are separated by the Bosporus . As they are about to set Nizib across the Bosphorus with Keraban's lazy servant , they meet a police officer who announces that a small tax per person will be levied for crossing the Bosphorus by boat. Keraban refuses to pay this tax out of hatred for the government. Out of defiance, he decides to circumnavigate the Black Sea in his carriage to have dinner in his villa. Since Van Mitten has accepted Keraban's invitation to dinner, and the latter would be extremely resentful of a refusal, he and his servant are forced to go along.

After surviving an attack by wild boars on the carriage, the tour company arrives in Odessa . There Keraban visits his nephew Achmed , who is about to marry Amasia , the daughter of the banker Selim . The wedding is to take place in Keraban's presence. Keraban asks Achmed to accompany him to Scutari. Shortly after Keraban's departure, Amasia and her servant Nedjeb are kidnapped by the pirate captain Yarhud .

In Poti, on the border between Russia and Turkey , they meet the elegant Saffar at a level crossing , who blocks their way. An approaching train destroys the carriage standing in the middle of the tracks. The angry Keraban is arrested by two Cossacks , put on the waiting train and taken across the Turkish border. Achmed, Van Mitten, Bruno and Nizib cross the border on horseback and pick up Keraban at the customs house. You continue the journey in a two-wheeled horse cart.

When the tour company stayed with a lighthouse keeper, they witnessed a ship sinking in a storm. Achmed saves two women who were on board, Amasia and Nedjeb. Captain Yarhud, who kidnapped Amasia on behalf of the wealthy Saffar and his steward Scarpante , also survived the accident.

In the Rissar caravanserai , the travelers get to know the Kurd Yanar and his sister Sarabul . By accident, Keraban, Van Mitten and Achmed break into Sarabul's room. The guilty party is unmasked in a judicial investigation. To avoid imminent prison sentences, Keraban and Amasia persuade Van Mitten to propose to Sarabul. In nearby Trebizond , Van Mitten got engaged rather reluctantly to Sarabul.

Unknowingly, Keraban hires the villain Scarpante as leader. In order to shorten the way to Scutari, travelers leave the coast at Scarpante's suggestion and cross the mountains of Anatolia . During a night camp, the travelers are attacked by bandits. Yarhud, Scarpante and Saffar are killed by Keraban before they can kidnap Amasia. The next morning it turns out that the travelers are just before Scutari.

At Keraban's villa, Van Mitten confesses to Sarabul that he cannot marry her because he is already married. Immediately after the confession, a telegram arrives stating that Van Mitten has been a widower for five weeks.

It turns out that Akhmed and Amasia's wedding cannot take place in Scutari, but only in the European part of Istanbul. The wedding threatens to collapse because Keraban still refuses to pay the tax for crossing the Bosphorus. He solves the problem by crossing the Bosphorus in a wheelbarrow, which a tightrope walker pushes across the water on a 1,300-meter high rope.

Achmed and Amasia can now get married. Only Van Mitten is unhappy because he still has to marry the unloved Kurdish woman. However, when he reads the telegram again, it turns out that it contains a read error. Ms. Van Mitten is not "... different ...", but "... decided to visit her husband". Shortly afterwards Mrs. Van Mitten arrives in Scutari.

Keraban the Starrkopf is an exciting, story-telling novel with many surprising twists. The overriding character is the stubborn Keraban, who rejects the "modern" achievements such as railways, steamships and telegraphy and only triggers the plot through his stubbornness. He consciously dresses old-fashioned and is against the government ruled by the progressive Young Turks . The Young Turks wear a fez as headgear , the Old Turks like Keraban a turban .

Van Mitten is a gentle Dutchman, but can also be a stubborn head like Keraban, for example in an argument with his wife, which by the way involves something typical of Holland - tulips - and which culminates in the couple throwing tulip bulbs at each other .

Bruno is Van Mitten's loyal servant who is mainly concerned with his weight. Bruno is of the opinion that in the Netherlands social standing depends on body weight. When he was losing weight because of the stresses of traveling, he urged Van Mitten to part with Keraban in vain. Van Mitten, however, is far too gentle to assert himself against Keraban.

The villains Saffar, Yanar and Scarpante are pale minor characters. The novel ends with Keraban buying the tax from the government. This makes Keraban extremely popular with the citizens.

Five weeks in a balloon  | The journey to the center of the earth  | From the earth to the moon  | Adventure of Captain Hatteras  | The children of Captain Grant  | 20,000 Leagues Under the Sea  | Trip around the moon  | A floating city  | Adventure of three Russians and three Englishmen in South Africa  | The land of fur  | Journey around the world in 80 days  | The mysterious island  | The Chancellor  | The Tsar's Courier  | Journey through the solar world  | The city under the earth  | A captain of fifteen years  | The 500 million of the Begum  | The suffering of a Chinese in China  | The steam house  | The Jangada  | The Robinsons School  | The green ray  | Keraban the stubborn  | The south star  | The archipelago in flames  | Mathias Sandorf  | Robur the Conqueror  | One lottery ticket  | The way to France  | North against South  | Two years of vacation  | The family without a name  | No mess  | Caesar Cascabel  | Mistress Branican  | The Carpathian Castle  | Claudius Bombarnac  | The boulder  | Master Antifer's wonderful adventures  | The propeller island  | From the flag of the fatherland  | Clovis Dardentor  | The ice sphinx  | The proud Orinoco  | An Eccentric's Testament  | The second fatherland  | The village in the air  | The stories of Jean-Marie Cabidoulin  | The Kip brothers  | Travel grants  | A drama in Livonia  | The Lord of the World  | The collapse of the sea  | The lighthouse at the end of the world  | The gold volcano  | The travel agency Thompson & Co.  | The hunt for the meteor  | The pilot from the Danube  | The shipwrecked of the "Jonathan"  | Wilhelm Storitz's secret  | The amazing adventure of the Barsac expedition  | Uncle Robinson  | Journey with obstacles to England and Scotland  | Paris in the 20th century