Waging by the lake

Waging is a redirect to this article. Further meanings are listed under Waging (disambiguation) .
Template: Infobox municipality in Germany / maintenance / market 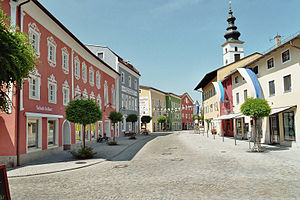 Waging by the lake

Beach promenade in Waging am See

Waging am See (officially: Waging a.See ) is a market in the Upper Bavarian district of Traunstein and the seat of the administrative community Waging am See . The climatic health resort is located on Waginger See .

Waging is located west of the Waginger See. The designation “at the lake” is a bit misleading geographically. Due to the lowering of the Götzinger Achen , which flows from the southern end of the lake near Petting , the lake level sank by two meters in 1867, so that Waging has now moved a little away from the lake shore.

Waging is in the Rupertiwinkel .

Waging am See has 120 districts:

Waging is a foundation of the Bavarians. The early Bavarian place name "Uuaginga" means "among the people of Uuago". Uuago (Wago) was the leader of the settlers. The place Waging first appears around 712, when the Bavarian Duke Theotbert donated the village to the Nonnberg Monastery in Salzburg. This donation is recorded in the Salzburg property register “Notitia Arnonis” (created 788-790). Through the so-called lower salt road, which led from Reichenhall through Waging to Wasserburg am Inn , Waging was already a prosperous place in the Middle Ages and belonged to the Prince Diocese of Salzburg . It received market rights in the 14th century . In 1685 Waging became the seat of a Salzburg nursing court . In 1805, briefly Habsburg , Waging has belonged to Bavaria since 1810. In 1818 the political municipality was established.

In May 1945 there were retreat skirmishes of the German military. After 1945 Waging took in many expellees . With the regional reform, the place became part of the Traunstein district on July 1, 1972. The election of the Green Sepp Daxenberger as Waginger Mayor in 1996 caused a sensation, making him the first Green Mayor of Bavaria and remaining in office until April 2008. Previously, he was second mayor for twelve years. The population in Waging was 6740 on April 1, 2010. The total number of inhabitants in the administrative community was 10,301. Waging gradually developed into an important resort and holiday resort.

On January 1, 1970, the previously independent municipalities Gaden and Nirnharting were incorporated. Otting and Tettenhausen were added on January 1, 1972. Freimann followed on July 1, 1972.

Since the last local election on March 15, 2020 , the municipal council has been composed as follows:

See also: List of architectural monuments in Waging am See

See: List of ground monuments in Waging am See

Waging is the terminus of the Traunstein – Waging railway line . The route is served hourly on weekdays, less often on weekends.

There are several campsites on the Waginger See , which is 6.2 km long and up to 1.7 km wide, such as B. the beach camp, the Schwanenplatz or Camping Gut Horn. There are many leisure activities in the vicinity: hiking, alpine pasture and mountain tours, fishing, boat rental, golf course and school, winter sports, mini golf, sailing and surfing school, skate park, fitness trail, Kneipp facility, indoor and outdoor tennis courts, beach volleyball and Soccer. The Waginger rowing club is also located on the lake.

Since 2008, TSV 1888 Waging has been organizing the Waginger See Triathlon every year with start and finish at the Strandkurhaus , which has always been booked out early in the past few years despite steadily increasing capacities.

Waging serves as the starting point for the Bajuwaren cycle path and is on the route of the Benediktweg cycle pilgrimage route , which was opened in August 2005.

Municipalities in the Traunstein district

Cities, communities and districts in the cultural landscape of the Bayerischer Rupertiwinkel