The Bavarian State Parliament is the state parliament of the Free State of Bavaria and its first of three constitutional organs . The Bavarian Senate was the second chamber until 1999, and since then Bavaria has had a unicameral system .

The provisions of the Landtag are regulated in Section 2 of the Bavarian Constitution . From 1950 to 1998 the state parliament consisted of 204 members, since 2003 at least 180 members have been elected. This number can increase as a result of overhang and compensatory mandates , for example 187 members were elected in the 2008 election, and 205 people were elected in the state election on October 14, 2018 .

See also : Distribution of seats in the German state parliaments 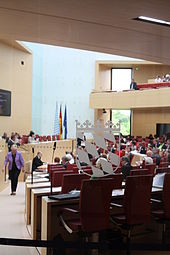 Meeting in the new plenary hall

The elections take place every five years (before 1998: every four years) and are general, free, equal, immediate and secret. The electoral system differs considerably from that of other German federal states. The distribution of seats takes place within the seven constituencies , which correspond to the administrative districts . There are no nationwide lists of parties. The second vote differs from the federal election law . Voters can tick not just one party, but a specific candidate on its list and thus change the sequence of the list candidates considerably. In addition, the majority in the state parliament is not determined by the second votes alone, but by adding up the first and second votes.

The electoral period ends prematurely if the state parliament decides to dissolve it with a majority of its members or if it is recalled by a referendum at the request of one million voters . This has never happened before.

The Landtag is responsible for passing laws and voting on the budget of the Free State. Laws can also be passed by referendum against the will of the majority of the state parliament. With the consent of two thirds of its members, the state parliament can resolve constitutional amendments, on which a referendum must take place.

He exercises control of the state government through the right to quote and the possibility of setting up committees of inquiry . A vote of no confidence is not provided for in the Bavarian Constitution, but the Prime Minister must resign if trusting cooperation with the State Parliament is no longer possible due to political circumstances. If he doesn't, he can be charged before the Bavarian Constitutional Court .

Furthermore, the state parliament is responsible for the election review and the election of the Bavarian data protection officer.

The Landtag President is elected by the Landtag together with the Presidium in the constituent session after the election . The President conducts the business of the Landtag, represents the state in all legal transactions and legal disputes of the Landtag. He exercises domiciliary rights and police powers in the state parliament building.

The current President of the State Parliament is Ilse Aigner (CSU).

Main building of the Bavarian Parliament in Munich

President of the Bavarian State Parliament

From 1962 to 2008, the CSU had an absolute majority in the Bavarian state parliament, in 2013 this was the case for the last time; In the state elections from 1970 to 2003, the CSU always received more than 50% of the vote - nine state elections in a row, which no party in another state in the Federal Republic was able to achieve.

Elections to the Bavarian State Parliament

The standing committees of the 18th Bavarian State Parliament (since 2018) are listed below.

The parliamentary groups that chair the respective committee are marked in color.

The political groups that chaired the respective committee are marked in color.

Other current committees and bodies

Since November 2018, the Bavarian State Parliament has again been headed by a woman, State Parliament President Ilse Aigner (CSU). Before that, Barbara Stamm (CSU) had been President since October 2008. In the parliamentary group, the Greens and the AfD each have a dual leadership with one man and one woman each. The leaders of the other political groups are all male.

(Where not otherwise indicated, the figures were taken from the publications on the website of the Bavarian Parliament, the percentages of the parliamentary groups were calculated.)

In October 2010, a liaison office of the Bavarian State Parliament was set up in the Bavarian Representation to the European Union in Brussels .

Session room of the Chamber of Reichsräte

Meeting room of the Chamber of Deputies

Parliamentary history began in Bavaria as early as 1311. The Ottonische Handfeste was the basis for a class representation of the nobility, clergy and the cities and markets in a country class representation, also referred to as the landscape, which came together at state assemblies. Although this land-based order was subject to change, it was basically valid until 1808 when King Max I issued a constitution that abolished the old order and provided for a representative body, which was never convened. Only on the basis of the constitution of the Kingdom of Bavaria from 1818 was a parliament again set up in 1819 . During the time of the Kingdom of Bavaria as the Bavarian State Assembly (from 1848 Landtag), it consisted of two chambers: the first chamber, chamber of the Reichsräte , and the second chamber, chamber of representatives . The latter was initially elected according to the census system and is the forerunner of today's state parliament. In 1848 class voting was abolished.

After the November Revolution , the Provisional National Council (1918-1919) was set up. On January 12th (or February 2nd in the Palatinate) state elections were held. The elected parliament had to move temporarily to Bamberg because of the council revolution in Munich in 1919 ( Bamberg constitution ). The Landtag met for the last time in April 1933. On January 30, 1934, all German state parliaments were formally repealed without replacement by the law on the reconstruction of the Reich of January 30, 1934 ( RGBl. I p. 75). In 1934 the state parliament building was converted into the "House of the National Socialists" for their Gau leadership. This parliament building, at Prannerstraße 20, where the Bavarian parliament had met since 1819, was destroyed in a bomb attack in 1944. It had been expanded and rebuilt again and again in the 19th century.

Bavarian state parliament based on the constitution of 1946

After the collapse of Nazi rule , the American occupying power initially only allowed parties and democratic bodies at local level. In 1946 democratic reconstruction at the state level was initiated. On February 26, 1946, an advisory state committee met for the first time as a preliminary parliament for a new democratic beginning. On June 30, 1946, the state constitutional assembly was elected by the Bavarian people. The election of the first state parliament took place on December 1, 1946, parallel to the approval of the constitution. The new Bavarian constitution once again introduced a two-chamber parliament; in addition to the state parliament as the representative of the people, there was the Bavarian Senate as the representative body. The state parliament first met, as before, the constituent assembly in the large auditorium of the university and from May 28, 1947 in the Sophiensaal in the building of the Munich Oberfinanzdirektion at Sophienstrasse 6, on January 12, 1949 for the first time in the Maximilianeum, which has been its seat since then Seat of the Senate was. The archive of the Bavarian State Parliament and the State Parliament library were also housed there.

In a session on the night of May 19-20, 1949, the Bavarian State Parliament voted 101 to 63 against the Basic Law for the Federal Republic of Germany with nine abstentions . In contrast to the SPD and FDP, the CSU, which has a majority in the Bavarian state parliament, rejected the Basic Law. Prime Minister Hans Ehard himself had warned urgently against the centralistic tendencies of the Basic Law. Bavaria was the only federal state to vote against the Basic Law, with the Bavarian State Parliament recognizing its legally binding force in the same session in the event that the necessary two-thirds majority was achieved in the other parliaments, which was ultimately the case.

On January 31, 1999, the traditional second chamber - the Bavarian Senate - was abolished by a referendum initiated by the ödp.

In order to ensure the ability of Parliament to work, according to Art. 17 Bavarian Assembly Act, a pacified district ("ban mile"). This means that it is generally prohibited to hold open-air meetings in its vicinity.

History of the Bavarian Parliament:

State parliaments in the Federal Republic of Germany