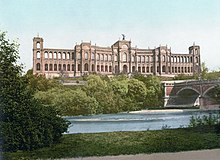 Photographed from the Isar Bridge (2012) 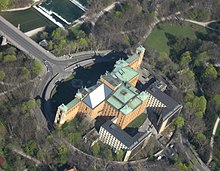 The Maximilianeum in Munich 's Haidhausen district has been home to the Maximilianeum Foundation for talented students from the Palatinate and Bavaria since 1876 , which also owns the building. It has also been the seat of the Bavarian State Parliament since 1949 . The building is located on the eastern Isar high bank ( Maximiliansanlagen ) in the line of sight of Maximilianstrasse over the Maximiliansbrücke . The elaborate set architecture creates a great long-distance effect.

History and architecture of the building

On October 6, 1857 , King Max II had the foundation stone laid for the building by the architect Friedrich Bürklein . Due to static problems due to the location of the building on the banks of the Isar, the facade of the Maximilianeum, which was originally planned in the neo-Gothic style of Maximilianstrasse , was designed under the influence of Gottfried Semper in the Renaissance style with round arches, columns, mosaics and bust-filled niches. In 1874 the building was finally completed after several repairs. The building is dominated by the 150-meter-long façade on the city side, which is bordered at both ends by three-storey open doorways with seven-bay arcade wings , also open on the upper floor, on both sides. In between there is the five-part main building with two three-axis corner projections, four-axis recesses that are convex on both sides and a likewise three-axis raised central projection . There are pewter figures on the attic , the figure of Nike in the middle , and the semicircular fields of the attic are decorated with mosaics.

Until 1918 the Maximilianeum housed the royal school for pagans as well as the Studienstiftung and a historical gallery . Until shortly before the end of the Second World War , the Munich art exhibition was held in the gallery . Towards the end of the war, two thirds of the structure were bombed. After the war, the building was rebuilt by Karl Kergl . 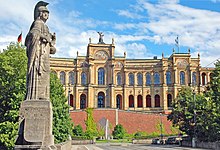 In 1949 the Bavarian State Parliament chose the building as its seat, which made corresponding changes in the gallery rooms necessary. The previous, historic building of the Bavarian Parliament in Prannerstrasse was badly damaged in the war and was never rebuilt.

When the Maximilianeum building became too small for the various uses, Helmut Gebhard added wing buildings with offices and conference rooms in the east in 1958/59 and 1964/65. From 1992 to 1994 an extension followed by the architects Volker Staab and Jürgen Pleuser , and from 2010 to 2012 another extension by the Berlin office Léon - Wohlhage - Wernik -Architekten. In 2005 Green City Energy installed a 20 kW solar system financed by citizen bonds on the roof of the wing buildings. In 2018 this was expanded by an 85 kW PV system.

On the east wall of today's conference room, as part of the historical gallery, there is a large fresco created by Engelbert Seibertz , on which Alexander von Humboldt's introduction to a group of scientists and artists in front of the backdrop of the Maximilianeum, still in the neo-Gothic forms before the change of plan from 1864. The historical picture The Hermannsschlacht , which the painter Friedrich Gunkel created for the Maximilianeum between 1862 and 1864, was lost in the Second World War.

Foundation stone of the Maximilianeum from 1857

The objects are now (partially restored) on display in the Maximilianeum.

In addition to Maximilian II's plan to build “a large national building on the Isarhöhe near Munich” to “elevate the monarchical national folk spirit”, the idea of ​​an athenaeum as an institution with the aim of “achieving talented Bavarian youths (of any class) came about to facilitate that level of scientific and intellectual training which is necessary to solve the higher tasks of the civil service ”.

In 1852 the Athenaeum , which has been named after the founder Maximilianeum since 1857 , was temporarily housed in a tenement house. Six high school graduates from Bavaria and the Palatinate were selected as the first scholarship holders, who could now study law and political science at the Ludwig Maximilians University without any financial worries .

Max II himself did not see the completion of the institution building, and the foundation only received its final legal form under his son and heir to the throne Ludwig II. According to the document from 1876, the foundation still owns the Maximilianeum building and a gallery with historical pictures and Marble busts. With the end of the monarchy in 1918, the protectorate passed through the Maximilianeum to the Ludwig Maximilians University. The following inflation consumed the foundation's assets, the only small source of income remained the entrance fees to the gallery. The financial situation improved again when the bombed-out Bavarian Parliament moved into the Maximilianeum on January 11, 1949 and (at that time) paid an annual rent of 70,000 DM for it. In addition, it took over the maintenance obligation for the building.

Since 1980, the Wittelsbach Anniversary Foundation has also made it possible for gifted Bavarian girls to receive a scholarship. Between the establishment of the institute and 2005, a total of 65 female and 737 students have benefited from the foundation. Well-known Maximilians were among others the two Bavarian Prime Ministers Eugen Ritter von Knilling and Franz Josef Strauss , also the physicist Werner Heisenberg , the writers Carl Amery and Ulrike Draesner and the songwriter Michael Kunze .

A multi-stage process has to be followed for acceptance into the Maximilianeum Foundation. The group of applicants is limited to the following regions of origin:

The most important requirements for applicants are a high school diploma, in which only achievements of at least 13 points are included, and the successful passing on the one hand of the examination for the scholarship according to the Bavarian Elite Promotion Act (except for the Palatinate and Saarlanders) and on the other hand a special examination in Bavarian Ministry of Culture. When selecting the scholarship holders, special emphasis is placed on the breadth of their interests and their openness to new and unfamiliar questions. Of the approximately 400 high school graduates with a grade point average of 1.0, around six to nine candidates are accepted each year. King Maximilian II assumed that after completing their studies, Maximilians predominantly commit themselves to civil service. There is no longer any obligation to do so today. With the exception of medicine and theology for a church office, any scientific subject can be studied.

The scholarship holders receive free board and lodging in the Maximilianeum in Munich for the duration of their studies (up to the first professional qualification) as well as the opportunity to spend one year abroad and take part in language courses. 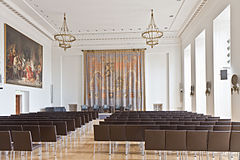 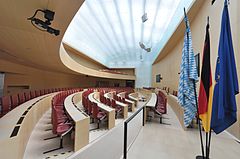 1946-48, the two gallery halls, which connect to the north and south of the stone hall in the middle of the building west of the stairwell, were converted into a plenary hall for members of parliament with a grandstand (southern gallery hall) and the senate hall (northern gallery hall). The stone hall as the central room on the main floor of the Maximilianeum is named after the reception and festival room in Nymphenburg Palace.

In January 1949, the MPs moved into their new parliament building, followed by the Senate in February . Even after the dissolution of the Bavarian Senate by referendum, with effect from December 31, 1999, the name Senate Hall was retained. Immediately after the end of the last plenary session before the summer break in July 2004, renovation work began to create a new plenary hall in order to better meet the functional requirements of a contemporary parliament in view of the difficult spatial proportions that were found. In front of the plenary hall is the parliamentary reading room, in front of the senate hall there is the academy hall (former conference room) for receptions and meetings, both rooms with a view of the city center.

According to Art. 17 of the Bavarian Assembly Act , assemblies in the direct vicinity of the state parliament are not permitted ( ban mile ).