The election for the 15th Bavarian State Parliament took place on September 21, 2003; the turnout was 57.1%. Along with the election, two referendums ( mandatory referendums ) were held to amend the Bavarian constitution. 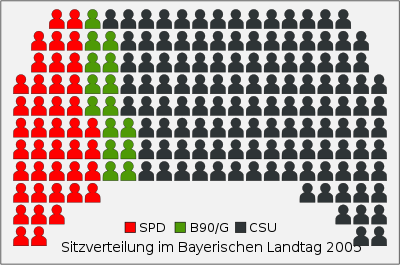 The CSU's top candidate was Prime Minister Edmund Stoiber , who has been in office since 1993 . For the SPD Bayern stepped Franz Manet to the chairman of the parliamentary group.

In this election, the CSU received a two-thirds majority of state parliament mandates for the first and so far only time in the history of the Federal Republic . For the first time, the SPD Bavaria received less than 20% of the vote.

At the same time as the state elections, two referendums to amend the state constitution were held in Bavaria. The first proposal provided for the inclusion of the principle of connectivity (Article 83). With the second bill, several changes were resolved collectively, such as the inclusion of children's rights (third main part, 1st section), the lowering of the passive voting age from 21 to 18 years (Article 14) and the alignment of Article 100 on human dignity to the Formulation in the Basic Law. Both bills were adopted by a majority of the voters in a referendum.

Elections to the Bavarian State Parliament

Elections to state parliaments in Germany in 2003