The title of this article is ambiguous. Further meanings are listed under Inzell (disambiguation) .

Inzell is a municipality in the southern district of Traunstein in the administrative district of Upper Bavaria . The parish village of the same name is the main town of the municipality and a recognized climatic health resort . The place is known for the Federal Center for Roller Skating and Speed ​​Skating . 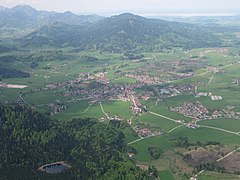 Inzell from East-Southeast, in the background the Chiemsee

Inzell lies in a wide valley floor in the Chiemgau Alps , which is framed by the Rauschberg , the Zinnkopf , the Teisenberg and the Staufen mountain range . In the local area of ​​Inzell, the Rote Traun begins at the confluence of the Großwaldbach and Falkenseebach (Maderbach) rivers . Inzell is also known as the “gateway to the Berchtesgadener Land district ”. The reason for this is the Zwing , a narrow mountain range between Inzell and Weißbach , which separates the Chiemgau from the Berchtesgadener Land district.

There are the following districts: 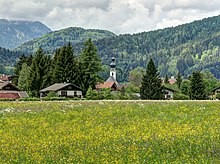 View of the village with the parish church of St. Michael

After the establishment of the St. Zeno monastery near Reichenhall, Archbishop Conrad of Salzburg handed over “to St. Zeno and his friars the estate and the forest of Inzella ”. As early as 1195, after the church of St. Michael was built, Inzell became an independent parish and court market when it was separated from Vachendorf . The seat of Hofmark, Inzell Castle, fell victim to secularization and was demolished in 1811. Inzell became an independent political municipality in the course of the administrative reforms in Bavaria in 1818 . As can already be seen in the coat of arms, mining and the smelting of ores were an important source of income for the village of Inzell. First was the Hochstaufen long on Inzeller Kienberg, the northern slope of the and of 1665 to almost 150 years Rauschenberg , lead and zinc mined. The ore was melted in the current district of Schmelz .

The municipality part Ramsen was reclassified with effect from December 1, 1996 from the western neighboring municipality Ruhpolding to Inzell.

Parts of this article appear to be out of date as of May 2020 .
Please help to research and insert the missing information .

Since the local elections on March 2, 2008, with a turnout of 66.0 percent , the seats in the municipal council have been distributed as follows:

The first mayor is also a member of the municipal council.

The majority of citizens belong to the Roman Catholic Church (around 73%). This value is higher than that of the Traunstein district and Upper Bavaria. The area of ​​the community is supplied by the parish Inzell-Weißbach. In addition to the parish church of St. Michael in the center there are two other Catholic churches (Church of Our Lady in the Niederachen district and the subsidiary church of St. Nicholas in Einsiedl) as well as several chapels.

10% of the population are members of the Evangelical Lutheran Church. The modern Christ Church is located in the district of Oed. The ev.-luth. Parish Inzell belongs to the parish of Ruhpolding.

Approx. 16% of the population are without or other denomination.

According to official statistics, there were 872 people in employment subject to social security contributions in 2009, 268 of them in manufacturing, 308 in trade and transport, and a total of 296 in other economic sectors (with agriculture and services). There were three in manufacturing and 13 in construction. In addition, there were 71 farms in 2007 with an agricultural area of ​​at least 2 hectares each.

Max Aicher Arena in Inzell, one of the most innovative speed skating rinks in the world. Opening for the 2011 World Cup.

An ice skating and speed skating rink was built on the Frillensee from 1959 to 1960 , before the world-renowned sporting and tourist winter operations were initiated from 1963 to 1965 with the construction of the natural ice stadium with ice rink and ice hockey rink. In 1965, the Inzell ice stadium was built in place of the natural ice stadium as the second artificial ice rink in Germany . Qualifying runs for the ice speedway world championship have also taken place there since the 1960s.

In June 2008, the International Ice Skating Union announced that Inzell had been awarded the contract to host the 2011 World Single Distance Championships. The prerequisite for this, however, is the construction of a speed skating hall, which had been planned for several years. Construction of the new hall began in autumn 2009.

The new ice rink was opened in time for the 2011 World Championships. The ice rink is called Max Aicher - Arena . The Ice Speedway World Cup Grand Prix of Germany took place there in March 2014.

Municipalities in the Traunstein district