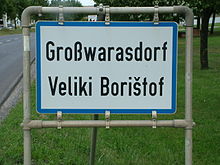 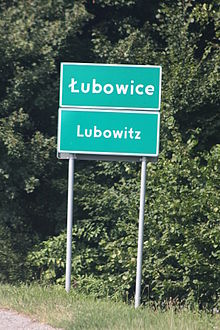 A place name , also a settlement name , technically oikonym ( ancient Greek οἶκος oíkos , house and anonymous ), is the name of a settlement . This can be a village or a town , a single farm (see house name ) or a wasteland , a group , a hamlet or a desert . The names of the settlements also include the names of the elements of the settlements, such as buildings and other infrastructure parts of the facility (oikodonyms, building names ) . A place without a settlement, on the other hand, is given a field name . With the study of place names, the addresses Toponomastik .

Origin of place names in the German-speaking area

The naming of a place, like all other names, helps people orientate themselves in their environment. Place names were necessary so that one or more properties could be clearly named or identified. Only in connection with the place names owned in the past could Lehnsrechte , court rights , Tenth , patronage , body characteristics , duties or other levies be allocated accurately.

The origin of the place names was always based on a naming motif. That was a characteristic that adhered to this particular place and that related to the first settler, founder (name), geographical or topographical conditions and peculiarities (such as water, river, ford , mountain, castle , church, monastery ) or possibly to mythological ones Reasons. Place names are mentioned in writing for the first time if their establishment is documented or if legal transactions associated with the place have been made and recorded in documents. However, documents are only incidental receipts. Most place names were therefore in use before they were first mentioned in writing.

Place names can have different origins:

Place names in German speaking countries (like most place names Celtic- Germanic origin) generally consist of a base word (originally dating ), which usually preceded by a modifier is adequately qualified. This pattern has mainly been used since the later Migration Period and probably goes back to Roman models such as Castra Regina ('Kastell am Regen '> Regensburg ) (where the basic word is at the beginning). An older pattern is the formation of a determiner and a suffix (which also applies to most place names of Slavic origin).

Since the basic words have often been blurred beyond recognition in the course of history (e.g. -heim to -em, -en, -um ), they are separated from suffixes e.g. Sometimes no longer distinguishable, so that in many cases only the oldest documentary evidence allows a reliable assignment.

Additional elements can be added to the names to distinguish between the same (or similar) place names in the vicinity. This can be a preceding addition such as mountain or forest or a subsequent addition such as at / am XY . Adjacent daughter settlements (or scheduled extensions of existing settlements) are usually by names additives such as new or small distinguished from the original settlement, the same function as additives meet -Neustadt etc. In most modern origin other nickname and additional indicators ( s u.. ); they are often only used in official traffic and ignored in the local colloquial language, for example Bad Münder am Deister .

Basic words describe the reason for naming a place or a settlement, for example the presence of buildings ( ‑hausen , -kirchen) or special geographical features ( -berg, -wald ). The basic words are also called endings because they are usually at the end of Germanic place names. However, this designation blurs the difference to the place name suffixes , which, in contrast to the basic words, have no independent meaning.

Place name suffixes can take the place of basic words (especially in ancient place names) . Since they do not have a meaning of their own, they are even more exposed than the basic words to abrasion (and mutual adjustment). In addition, the German place names were originally dative forms (used as locative ) and therefore often end in -e ( singular ) or - (e) n ( plural ), e.g. B. -walde "im / am ... wald (e)", -hausen ( Old High German -husun, husum, -husin, -huson ) "at the ... houses" - these case suffixes are largely assimilated.

They are differentiated from nearby places with the same name (upper / lower case, old / new, upper / upper / lower) and are usually placed in front of the other destination words. The distinction to the destination words is more functional than content, so that elements of the upper and lower lists z. T. can be exchanged, for example Markranstädt (next to Altranstädt ) and Oldenburg (without a nearby counterpart).

There are distinctions after

The addition of small can also indicate a Slavic settlement next to a German settlement ( large ). This is explained by a translation chain with the Latin used in medieval documents : Few was used as the name for Wenden, this translated to Latin minor , which later came back into German as Klein . Along the German-Slavic settlement border of the early and high Middle Ages, there are places with small as well as the original little . Examples of this are Jena and Wenigenjena on the opposite bank of the Saale, Wenigensummer and Großensummer (today's Sömmerda ) or Wenigentaft and Großentaft in the Rhön. In between there are also places like Kleinbrembach and Großbrembach with the back-translated Klein- as a name addition.

A number of city names appeared and appear several times in the German-speaking area, for example Mühlhausen / Mülhausen or Rotenburg / Rothenburg . The city name Neustadt appears several dozen times. In order to be able to distinguish the cities from one another in a time without official country codes or postcodes, they were given toponyms as surnames, with which the additional names of rivers ( Marburg an der Drau ), islands ( castle on Fehmarn ), country names ( Münster in Westphalia ) , Mountains ( Neustadt am Rübenberge ) or landscapes ( Herzberg am Harz ) a distinction should be made possible.

In some countries, some cities have an additional officially used nickname in addition to their place name . (see also: List of cities and municipalities with names added in North Rhine-Westphalia )

A distinction must be made between name additions to avoid misunderstandings (e.g. City of Haag , New York City ), officially used additions (as in Free and Hanseatic City of Hamburg ) and surnames or nicknames that are only used for characterization with regard to tourism relevance and serve the "sound", thus the meaning or history of a place, as in:

Some surnames or nicknames are common for several cities:

The formation or change of place names is the responsibility of the federal states with similar regulations. The change of a parish name is decided by the parish council. Official place names have to be approved by the respective state authorities (mostly interior ministries but also state middle authority as the supervisory authority).

Name suffixes are permitted if they a. serve to differentiate as in Neustadt in Holstein , Neustadt an der Weinstrasse , Neustadt (Saxony) etc.

Some municipalities have abbreviations, slashes or brackets in their names such as Hann. Münden , Nienburg / Weser or Oldenburg (Oldb)

Officially approved but also unapproved epithets and markings are, for example:

See also : List of cities and municipalities with names added in North Rhine-Westphalia

For general geographical names, the place directory (OVZ) of the Austrian Central Statistical Office (STAT, formerly ÖSTAT), the Austrian map 1: 50,000 (ÖK50) and the database GEONAM of the Federal Office for Metrology and Surveying (BEV) are available. Their data are determined in the context of population censuses (STAT) and through inquiries with the municipalities (BEV).

A distinction must be made between the place name of a municipality , the locality , a settlement (place in the general sense) and a cadastral municipality :

Therefore, where the main town is registered as a locality and cadastral municipality in a municipality , the official names may differ:

The cadastral parishes may be relocated in the case of incorporations and re- municipalities - of course not the localities: If cadastral parishes are divided in this process, they often keep the name and are then numbered in Roman :

When municipalities are amalgamated or incorporated, in most cases the original cadastral municipalities continue to exist, even in the larger cities: There, the element of the city ​​quarter is added as an urban planning element: the city of Linz, for example, is divided into 13  cadastral municipalities, but 9  districts (all of them also named as KG) and 36  statistical districts . In Vienna , which is also subdivided into municipal districts - an administrative structure that only exists here - the names of the localities are even more complex.

In recent years, the community names, and increasingly also the places, have been changed so that they are unambiguous within Austria without exception, often (in analogy to traditional names such as Zell am See and Zell am Moos in the State of Salzburg) also beyond the national borders Addition of a characteristic epithet such as Neumarkt im Hausruckkreis (Upper Austria), Neumarkt in Steiermark , some also to distinguish it from places in other countries (mostly the German-speaking neighboring regions of South Tyrol, Eastern Switzerland, Bavaria).
As of 2018 there are only three cases with the same named municipalities (with municipality code ):

In addition, numerous municipalities have given themselves epithets that do not serve to delimit the place, but rather to define the landscape more closely, such as the Carinthian state capital Klagenfurt am Wörthersee , or the Attersee municipalities , which have all joined together on the Attersee , including the municipality of Attersee am Attersee .

The names of the cadastral communities (land register), as well as the labeling of the place-name signs (according to StVO , which refer to the locality term as local area) have in part not participated in this development, and the different legal references are also the cause of the Carinthian place- name sign dispute over the Slovenian name .

In the course of this , the municipality names were standardized on Sankt in some federal states , the cadastral and locality names may still be abbreviated to St. (e.g. municipality: Sankt Georgen bei Salzburg , KG: St. Georgen , Ortschaft: St. Georgen near Salzburg ).

The only officially bracketed municipality name in Austria is Sankt Josef (Weststeiermark) , otherwise one only finds linguistic forms (in, im, bei) .

In Austria , like Sankt , the addition Bad is part of the official name given by the respective state government. It is awarded to medicinal baths, thermal baths, climatic health resorts, etc. Aflenz Kurort is called as a community name, otherwise there is also the right to use recreation village as an additional name.

Occasionally there is a city as part of the name ( city ​​of Haag ), or village ( Dorfgastein ). Vienna is called the federal capital , St. Pölten , the new capital of Lower Austria, expressly the state capital . As the city administration, Salzburg calls itself the city ​​of Salzburg to differentiate itself from the state government of the federal state of the same name ( Land Salzburg ) . The statutory cities of Burgenland (an old city-law term) Eisenstadt and Rust have traditionally been known as Freistadt (not to be confused with Freistadt Upper Austria) since Hungarian times .

Otherwise official city names are unusual, not least because of experiences during the Nazi era ( city ​​of the Nazi party rallies, etc.).

Regarding the spelling of the municipality names of Sankt it should be noted that in Austria this varies from federal state to federal state, whether the addition Sankt St. is used as the official spelling. This does not have to apply to place or settlement names.

Pfaffenschlag near Waidhofen an der Thaya is Austria's longest municipality name with 40 characters (including the one with the most words) and Niederhelfenschwil  (18) is Switzerland's.

A curiosity for German speakers are place names that do not contain vowels, e.g. B. Krk (it must be remembered that the sound r in Slavonic is syllable, one speaks “ kr̩k ”).

In the US, the name comes Franklin at the front frequently .