The title of this article is ambiguous. Further meanings are listed under Eschborn (disambiguation) .

Eschborn is a city in the Main-Taunus district in southern Hesse . It belongs to the Frankfurt metropolitan area and borders the city of Frankfurt am Main to the northwest .

Eschborn is located in the Rhine-Main area on the eastern edge of the Main-Taunus district . It is adjacent to the Frankfurt districts of Sossenheim and Rödelheim and belongs to the Frankfurt metropolitan area . The Frankfurt city center is 7 km, the international Frankfurt am Main Airport 15 km away. The Niederhöchstadt district , which borders on Eschborn in the north, belongs to Eschborn.

Eschborn borders in the north on the cities of Kronberg im Taunus and Steinbach (Taunus) (both Hochtaunuskreis ), in the east and south on the independent city of Frankfurt am Main and in the west on the city of Schwalbach am Taunus ( Main-Taunus-Kreis ). 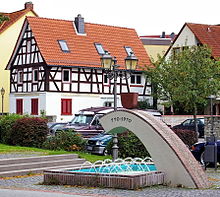 Half-timbered house on the main street

The Eschborn train station in 2000

In 770, Eschborn was first mentioned in a document as a cinder well in a deed of donation to the Lorsch Abbey:

770 June 12th.
In God's name I, Risolf, and my brother Hadalmar, give to the holy martyr Nazarius , at the time when the venerable Abbot Gunduland presides over the monastery, under the assurance that it is valid for all time, supported by contract, in Aschenbrunne im Niddagau a Hufe Landes and 44 serfs and a vineyard .
Done in the Lorsch Monastery on June 12th, the second year of King Karl.

The name ash well means something like " fountain on the ash ". On July 3, 875, a flood destroyed the place, killing 88 people and almost all of the livestock. The Eschborn tower castle was built in the 11th century, it is with the end of the 12th / beginning of the 13th century. Emerging gentlemen from Eschborn in connection, who moved their headquarters shortly afterwards to Kronberg . Eschborn belonged as an imperial fief to the Lords of Kronberg until they died out in 1704 and their rule fell to Kurmainz.

In 1389 the battle of Eschborn took place. As part of the war between the Rhenish League of Cities and the Count Palatine, the city of Frankfurt fought against the Knights of Kronberg . The Kronbergers and their allies who came to the rescue (the Count Palatine and the Hanauers) triumphed and took numerous prisoners, including the mayor of Frankfurt, who they only released against payment of 73,000 gold gulden ransom. In a battle at Höchst in 1622 between General Tilly and Christian von Braunschweig during the Thirty Years' War , the old castle complex and almost the entire place were destroyed (see more under Battle of Höchst ).

Through the Peace of Lunéville in 1801, the Prince of Nassau-Usingen came into the possession of the Kronberg rule. In 1806 Kronberg and Niederhöchstadt went together as part of the Principality of Nassau-Usingen in the newly formed Duchy of Nassau under the leadership of the House of Nassau-Weilburg . After the duchy was annexed by Prussia in 1866 after the Austro-Prussian war , Eschborn and Niederhöchstadt fell to the Kingdom of Prussia. With the establishment of the German Empire , Eschborn belonged to the German Empire from 1871. With the opening of the Rödelheim- Kronberg railway of the Kronberger Bahn on August 19, 1874, Eschborn received its first railway connection. At the beginning of the war in 1914, 1549 people lived in Eschborn; 205 men were drafted for military service . Up to 50 prisoners of war from France and Russia lived in Eschborn.

View of the "office city Eschborn"

Construction of the Frankfurt-Sossenheim military airfield (later name: Fliegerhorst Eschborn ) began on January 1, 1939 and was never completed. The military airfield, which the Germans built at the end of the 1930s under the cover name "Schafweide", initially consisted of only a large meadow and a few barracks . Several large stone hangars were built , one of which is still standing today. The headquarters and most of the other buildings were only built as barracks. The airfield was in use under the name Eschborn during the entire Second World War . In particular, pilots were trained there on gliders . From April 1945 until the end of the war (May 1945), fighters of the US Air Force were stationed on the field, which had no paved runway under German administration, and flew missions against the German Reich from there. After the end of the war, the Eschborn airfield was of great importance as an alternate airfield for the not yet restored Frankfurt am Main airport . With the restart of Frankfurt Airport, flight operations in Eschborn were suspended. The US barracks Camp Eschborn , where American armed forces (pioneer unit with heavy equipment) were stationed , remained on the site, which is partly within the district of Schwalbach . After the withdrawal, the site was bought by the city and converted into the Camp-Phönix-Park industrial park . The Eschborn receiving radio station , which was operated from 1948 to 1972, was used primarily by US soldiers for overseas telephony at home.

The Second German Television (ZDF) began operations in Eschborn on April 1, 1963 under its first director Karl Holzamer , but moved to Wiesbaden in 1964 and to Mainz in 1974 .

On the occasion of the 1200th anniversary celebration, the municipality of Eschborn was granted the right to use the designation city on April 14, 1970 by the Hessian state government .

In the course of the regional reform in Hesse , the neighboring municipality of Niederhöchstadt was voluntarily incorporated into the city of Eschborn on December 31, 1971 by the incorporation agreement of September 15, 1971.

In historical documents, the place is documented under changing place names over the centuries :

The following list gives an overview of the territories in which Eschborn was located and the administrative units to which it was subordinate:

The reason for the high increase in the number of inhabitants in 1972 was the incorporation of the Niederhöchstadt district .

The mayoral election on September 2, 2007 had the following result:

The mayoral election on September 22, 2013, which was held at the same time as the Bundestag and Hessian state elections , had the following result in the first ballot:

The runoff election between Wilhelm Speckhart (CDU) and Mathias Geiger (independent) on October 6, 2013 had the following result:

The election, which took place on October 21, 2019, had the following results:

Blazon : " A silver open flight growing out of a golden crown in the base of the shield , top right and top left covered with four blue iron hats, 2: 2 set."

The current coat of arms was given to the community in this form on February 8, 1937 by the President of the Prussian Province of Hesse-Nassau , Prince Philip of Hesse . A previous coat of arms was in effect until this date at the latest.

The so-called amusement parks are located along the Westerbach , the only flowing body of water in Eschborn. These are predominantly agricultural areas, i. H. Arable farming, pastures, a few orchards here and there . Frequently used paths for pedestrians and cyclists lead through these areas as a connection between the two Eschborn districts and the neighboring towns. Through the Kirchwiesen (starting behind the primary school in Niederhöchstadt) you can walk to Kronberg in about an hour, and through the Unterwiesen (starting behind the former building yard in Eschborn) to Frankfurt-Rödelheim. The Oberwiesen lie between Niederhöchstadt and Eschborn, and the popular tractor playground is also here , which is named after its main attraction. Together these form the green lung of the city, where no buildings or seals are allowed.

The Arboretum Main-Taunus is a 76  hectare tree and bush park. About 600 species of trees and bushes from all parts of the world are planted here. The arboretum is on the outskirts of the towns of Schwalbach am Taunus , Sulzbach (Taunus) and Eschborn. Several cycling and hiking trails lead through the arboretum; it is open to the public all year round.

Eschborn as a factor in the Main-Taunus

Due to its direct proximity to Frankfurt, Eschborn is a financially prosperous city in the so-called Frankfurt " bacon belt ", which is reflected not least in many construction projects. Furthermore, the city of Eschborn finances almost half of the district levy for the Main-Taunus district .

The Eschborn sculpture axis is a collection of eight sculptures in public space in Eschborn. The following images show the seven individual sculptures Travel a Head , Hua , Phönix , Fulcrum , Three Columns , Set Piece , Stones for Eschborn and the double sculpture Adam and Eve .

One of the most successful clubs in Eschborn is the soccer club 1. FC Eschborn 1930 , which has been in bankruptcy since January 2016 .

Another very successful Eschborn club is the tennis club tennis 65 eschborn , which has a German champion in addition to many teams in the regional, national, district and regional leagues. The men 55+ team became German team champions in 2010 and 2011.

The largest clubs in the city include u. a. the TuRa Niederhöchstadt and the gymnastics club Eschborn 1888 . Numerous other clubs complement a broad, especially sporting offer.

There has been an indoor and outdoor swimming pool between the districts since the early 1970s. The so-called meadow pool was reopened on September 1, 2001 after a year-long refurbishment and renovation and offers a sauna area and indoor pool as well as an outdoor pool each with a 25-meter lane.

In addition, an internationally known bike race is started in Eschborn every May 1st (in 2011 for the 50th time), which was known as Rund um den Henninger Turm until 2008 . Since then, the name has changed depending on the sponsors, but includes Eschborn's name via Eschborn-Frankfurt City Loop to Rund um den Finanzplatz Eschborn-Frankfurt ; In addition to professional cyclists, amateurs and non-organized riders also start in separate ratings, most recently not from Eschborn.

Eschborn offers u. a. Due to its proximity to Frankfurt am Main and its easy accessibility, around 30,000 jobs (as of 2011). They are mainly concentrated in the south industrial area and in the wholesale and retail companies in the east and west of the city. Almost 90 percent are located in the service sector , u. a. at the companies Vodafone (formerly Arcor ), Deutsche Bank , Deutsche Börse , VR Leasing , Siemens , Deutsche Telekom , Ernst & Young , IBM , Techem , SAP and Randstad Germany ,

as well as with the following authorities and associations:

and numerous other consulting, marketing and software companies. The furniture company Mann Mobilia also has a large branch in Eschborn. Eurest is a company restaurant operator founded in 1974.

Well-known companies with their former headquarters in Eschborn are u. a. the Georg von Opel , Arthur Andersen and Linotype AG group of companies, today Monotype GmbH.

There are four schools in Eschborn:

The next motorway access to the A66 and A5 are about 1.5 km away and the S-Bahn - lines S3 and S4 drive through Eschborn (breakpoints Eschborn Süd , Eschborn and Niederhöchstadt ) and provide a direct connection to the Frankfurt city center.

Since the beginning of 2013, the Frankfurt traffic department has been examining a possible extension of the U6 underground line to Eschborn and has commissioned a corresponding specific investigation of the project. This involves the extension of the U6 subway line, which currently ends at Heerstrasse in Frankfurt-Praunheim . A stop in the Helfmann-Park industrial park may also be possible. According to the mayor of Eschborn, this would “further enhance the Eschborn location”. There is not yet an exact schedule for the project. A meeting with representatives from Eschborn, Frankfurt and Oberursel on the subway topic is to take place. Bündnis 90 / Die Grünen in Hochtaunuskreis have spoken out in favor of expanding the U6 beyond Eschborn, with stops in Steinbach and Kronberg . The city of Oberursel in the Hochtaunus district has been connected to the Frankfurt underground network via the U3 underground line since the 1970s.