Killesbergturm in Stuttgart by Jörg Schlaich

A lookout tower (also a lookout tower or observation tower ) has the function of allowing the greatest possible distance and an instructive 360 ° panoramic view . Such a tower should clearly tower above the tallest trees on wooded mountains .

In contrast to observatories , airport towers and the like, the view is for leisure and pleasure. Many older lookout towers are masonry structures, often modeled on medieval watchtowers . There are also numerous older observation towers made of wood or iron ( cast iron or rolled steel profiles).

Most of the older lookout towers do not have a lift. The platform height is usually between 5 and 40 meters.

The Großer Feldberg observation tower after it opened in 1902

In Germany, observation towers in the great outdoors were first built at the end of the 18th century, initially often by aristocrats . From the middle of the 19th century, this building task was passed on to the citizens and was carried out by associations and committees. The climax of these activities was the time of the German Empire (1871-1918), when after the resignation of Chancellor Otto von Bismarck in 1890 the construction of the 240 Bismarck Towers began. These activities were then followed by the Kaisertürme and Kaiser Wilhelm Towers .

In Austria and Switzerland, many lookout points were built by Alpine and tourist associations and are looked after by them. Nobles and citizens' committees were also active on wooded mountains in the vicinity of capital cities ; many waiting areas are named Jubiläumswarte because of the long reign of Emperor Franz Joseph .

High observation towers were not built until the end of the 19th century after the invention of the elevator . The Eiffel Tower and the Blackpool Tower are particularly worth mentioning here. In Germany, between 1924 and 1926, the Berlin radio tower was built as a combined broadcasting and viewing tower on the Berlin exhibition grounds .

After the Second World War, there was a great need for high towers, especially away from the high mountain ranges , for the construction of VHF radio and television transmission networks and higher-level long-range telecommunications connections using radio relay . In many large cities there was a desire to equip these towers with a viewing platform, but these are not viewing towers, but rather broadcast towers , examples of which are the Mannheim telecommunications tower or the Berlin television tower . In other places, the design of the head tower was adopted and high observation towers were built without the need for communications technology , such as the Skylon Tower at Niagara Falls or the Danube Tower in Vienna's Donaupark , which opened with the Vienna International Garden Show ( WIG 64 ) , for which the tower is also a strong one Should be a landmark in the park. 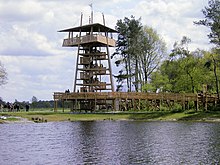 Lookout tower for the State Garden Show in Rietberg

Lookout towers are still being built, both for garden shows and in a landscape context. For example, the expansion plan of 1958 for the Palatinate Forest Nature Park , created as the third national park in Germany, provided for seven observation towers.

The construction of temporary observation towers and information centers at large construction sites is new, such as the 13 m high steel view point by the Renner Hainke Wirth architects' office in Hamburg's HafenCity , which opened in 2007, and the 32 m high BBI Info Tower with elevator and an entrance fee to be paid at Berlin Brandenburg Airport and the 60 m high “ bahnorama ” with a 40 m viewing platform and a lift during the construction of Vienna Central Station , which was the highest accessible wooden tower in Europe , which was set up in 2010 by the turn of the year 2014/15 .

As a rule, modern lookout towers are not bricked up, but instead are made from wood, concrete or steel.

Some towers are accessible free of charge, others only against admission. Some towers are only accessible at certain times or occasions (such as Monument Open Day ). In the case of small towers, the platform is often unglazed. Some towers have a restaurant at the base of the tower or in a neighboring building. There are also observation towers in some amusement parks .

As an alternative to viewing towers, viewing platforms or viewing terraces near restaurants or on the roof of mountain stations of the cable cars have also been implemented on some mountains . In many cases, such vantage points do not allow a view in all directions.

Towers that are no longer used for their original function are often equipped with viewing platforms. A certain curiosity of its kind was the overhead line mast 93 of the 4101 facility near Cologne, which was combined with a walk-through viewing platform until 2010 .