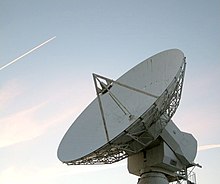 13.5 m Ka-band antenna of the ESTRACK station in Redu , Belgium

Communication engineering covers a very large area of ​​responsibility, so that a whole series of sub-areas has emerged.

Until a few years ago, the largest man-made machine was a communications system, namely the worldwide telephone network . At the moment the telephone network is going through a transition phase and is being absorbed into another, even larger telecommunications system, the Internet , without the broader public being aware of this. The telephone network, after it served as access technology to the Internet for a while, is or has become part of the Internet itself, and is fundamentally changing technologically and structurally in the process. This process has largely been completed in Germany and other western industrialized countries . For example, by the end of 2018, Deutsche Telekom had switched the landline network, including, above all, the technical infrastructure for telephone and long-distance data connections throughout Germany to Internet-based IP telephony and all connections to VDSL technology. The only change for normal landline telephone customers is that their previous landline telephone may now be connected to a DSL router with the same or expanded functionality.