from Wikipedia, the free encyclopedia
This is the spotted version , flagged on June 23, 2020 . There is 1 pending change that has yet to be viewed.

View from Staufen to Kelkheim

Kelkheim (Taunus) is a city in the Voraunus ( Rhine-Main area ). Its core area is around ten kilometers northwest of the Unterliederbach district of Frankfurt . Kelkheim is located in the Main-Taunus district and with almost 30,000 inhabitants is the second largest city after Hofheim am Taunus .

Kelkheim is located immediately northwest of Frankfurt am Main. Other neighboring communities are Hofheim am Taunus , Eppstein , Glashütten , Königstein im Taunus , Bad Soden am Taunus and Liederbach am Taunus . Large cities in the vicinity are in addition to Frankfurt am Main (10 km southeast), Wiesbaden (about 25 km) and Mainz (about 30 km).

By Kelkheimer urban area of the flow Liederbach (by Hornau, middle, Münster) and the cancer Bach, whose source in Ruppertshain located and in Fischbach is to Fischbach. Since 1958, work has been carried out in several stages on the renaturation and landscaping of the Liederbach, also to improve flood protection. The work, which relates to a total stretch of 3.5 km of the river, should be completed by 2014.

As a city, Kelkheim (Taunus) is still comparatively young. The first written mentions of the districts were made relatively early:

However, it was not upgraded to a town until April 1, 1938, when the President of the Prussian Province of Hesse-Nassau , Philipp Prince of Hesse , ordered Münster and Hornau to be incorporated into Kelkheim and at the same time granted the resulting larger community town rights.

Nobody asked the total of 5300 inhabitants, which led to great resentment, especially in Münster. After the Second World War, citizens of Münster also tried to regain their independence. Unsuccessful: Despite collecting signatures, the state government confirmed the merger, which is important for urban development.

Kelkheim received its current shape with six districts in the course of the Hessian territorial reform . On January 1, 1977, the city of Kelkheim and the previously independent communities Fischbach and Rossert merged to form the new city of Kelkheim. Here too there was resistance. So had Ruppertshain and Eppenhain on 31 December 1971 on the community Rossert together to escape the merger with Kelkheim. On January 1, 1978, the name of the city was officially changed to Kelkheim (Taunus) .

Ofterdingen fountain in front of the Kelkheim town hall. The fountain designed in 1974 by the Stuttgart sculptor Angelika Wetzel is reminiscent of Heinrich von Ofterdingen

Distribution of seats in the 2016 city council
A total of 45 seats
a percentage of the valid votes cast
b In 1997, FORUM is missing from the table with 4.4%.

In the 2016/21 electoral period, the Kelkheim magistrate consists of one full-time and eleven honorary members, who are provided by UKW (five), CDU (four), SPD (one) and FDP (one).

Mayor of Kelkheim is Albrecht Kündiger (UKW), who has been in office since July 1, 2015. Kündiger has been the first Kelkheim mayor since the Second World War who is not provided by the CDU. He prevailed in the runoff election on June 28, 2015 with 60.8% against Sabine Bergold (CDU). The turnout was 49%. In the first ballot on June 14, 2015, Patrick Falk (FDP), who ran as an independent candidate in Kelkheim, had left. He received 11% of the vote. In the first ballot, Kündiger was 46.2% ahead of Bergold with 42.8%. The turnout was 47%.

The Kelkheim coat of arms is divided into four fields, the upper right-hand field in heraldry shows a silver, six-spoke wheel on a red background ( Mainz wheel ). The field at the top left shows a red horn on a silver background. In the two fields below, a horseshoe is shown in the alternating colors of red and silver. After the merger of the three communities Kelkheim, Hornau and Münster on April 1, 1938 to form the city of Kelkheim, it was also decided to develop a city coat of arms. This project was delayed by the Second World War, so that the city of Kelkheim could not be awarded its new city coat of arms until June 19, 1950.

In order to symbolize the growing together of the three previously independent communities, it is made up of former place symbols from the three former districts of Kelkheim , Hornau and Münster . The horseshoe was an old symbol of the Kelkheim community, which is documented by a seal imprint as early as 1668. The horn was chosen as the "talking" symbol for the place name Hornau. The wheel represents the Mainz wheel , the coat of arms of the Electorate of Mainz , to which Münster belonged from 1450 (first use of the Mainz seal in 1694) until the secularization of 1803. After the incorporation of Fischbach , Ruppertshain and Eppenhain on January 1, 1977, the development of a new city coat of arms was up for discussion, but this was rejected on the grounds that the new districts were already represented by the Mainz wheel, as these were also between 1581 and 1803 belonged to the Electorate of Mainz.

The flag was approved by the Hessian Ministry of the Interior on October 22, 1954. Flag description: "In a white central panel, which is bordered by red stripes, the red and white squared Kelkheim coat of arms with wheel, horn and horseshoe." 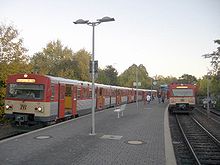 Kelkheim has three stations of the Königsteiner Bahn , a suburban train similar to the S-Bahn that runs every 30 minutes from Königstein via Kelkheim and Frankfurt-Höchst to Frankfurt Central Station . The operator of this railway line was the Frankfurt-Königsteiner Eisenbahn (FKE), which was renamed in 2006 to Hessische Landesbahn GmbH (HLB).

Transdev operates numerous bus routes in the west of Frankfurt . Line 804 of the Rhein-Main-Verkehrsverbund serves all six parts of the city. In addition, lines 263 and 815, as well as lines 81, 83 and 805 through Ruppertshain through Kelkheim.

The federal highways 8 (Frankfurt– Limburg , in the direction of Frankfurt, developed like a motorway), 455 (Wiesbaden– Bad Homburg ) and 519 ( Rüsselsheim am Main –Königstein) run through the Kelkheim urban area . On the Bundesautobahn 66 (Frankfurt – Wiesbaden) there is a Kelkheim exit , but it is in the area of Frankfurt-Unterliederbach .

View of the Gimbacher Hof 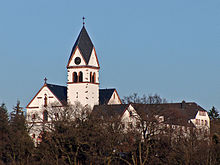 Kelkheim-Mitte has a pedestrianized shopping street, Bahnstraße . In the south of the district, the New City Center was opened on Frankenallee in November 2008 . The city's main street is Frankfurter Strasse , which runs through Kelkheim-Mitte and Münster from north to south.

Kelkheim is known as the city ​​of furniture . Numerous medium-sized family businesses still produce and sell furniture in Kelkheim, especially high-quality furnishings and period furniture . The most famous product was and is the Frankfurt cabinet . Until 1997, there was also a nationally important furniture exhibition once a year in Kelkheim . Furthermore, companies in the paper industry and toolmaking as well as smaller and larger craft businesses are located in Kelkheim.

Kelkheim has a lively cultural life with concerts from classical to rock, readings, cabaret and theater performances, which are organized by the Kelkheimer Kulturgemeinde e. V. or by the city's cultural department. In addition, Kelkheim has a film theater with two modern cinemas, which is run by an association on a voluntary basis.

The rock band Verlen was founded in Kelkheim at the end of the 1990s .

The funk rock band The Mule released their jam album "Sessions" in 2018 , which was recorded live in the studio in Kelkheim the year before.

There are around 30 sports clubs in the city of Kelkheim (Taunus). Together they number around 12,000 members. With TSG Münster , Kelkheim owns a previously successful men's handball team that played in the 2nd handball league between 2005 and 2011. Various other sports clubs offer a wide range of popular sports , and the local hiking clubs are also very popular.

The SG Kelkheim Lizzards are among the most successful flag football teams in Germany.