Liederbach am Taunus is a municipality in the Main-Taunus district in Hesse .

The landscape of the community is characterized by the so-called "Green Center", which consists largely of cultivated arable land and the generous stream of the Liederbach . The green center corresponds to about one sixth of the total area of ​​Liederbach, and the community is very keen to maintain it. 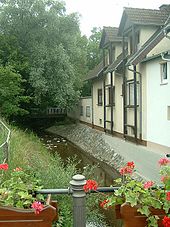 Presumably around 550 the villages Niederhofheim, Oberliederbach and Unterliederbach were founded. The first documentary mention was made in 791 as Leoderbach , which was owned by the Lorsch Monastery . In 1100 Leoderbach passed into the possession of the Lords of Eppstein as a fief . They sold the village to the Landgraviate of Hesse in 1492 . The Reformation found its way into Liederbach in the 17th century.

The communities of Oberliederbach, Unterliederbach and Niederhofheim came to Nassau-Usingen in 1803 and finally, six years later, to the unified Duchy of Nassau . After the German-German War , the three places were assigned to the Prussian province of Hessen-Nassau in 1866 . In 1903, with the Niederhofheim-Oberliederbach station on the Höchst-Königstein railway line, a separate train station was built.

As part of the Hessian municipal reform , both communities merged on December 31, 1971 to form the new community of Liederbach . The heather settlement to the north was mainly built by the Höchst paintworks in order to offer their employees local accommodation.

Description : Split in gold and blue with a larger place at the split in the confused colors ; each one facing a quail , again in mixed up colors.

From 1979 to 2008 Gerhard Lehner was the mayor of Liederbach, making him the longest-serving and longest-serving mayor in the district. In August 2008 Eva Söllner (CDU) was elected as the new mayor; she took over the office in January 2009 as the first woman in this position. Ms. Söllner was re-elected in May 2014. 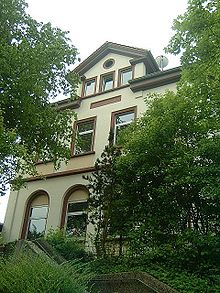 Liederbach has had several partner communities in Germany and other European countries for many years. These are in detail:

See: List of cultural monuments in Liederbach am Taunus

The association The Liederbacher notch Borsch directed a year within September and October notch from. The kerbeborsch have the task of guarding their Hannes , a life-size dressed straw doll that is hung on the church fair tree. Traditionally, other villages try to steal this symbol . The curb is always connected to dance and a fairground .

The Schmiehbachtal , located in the immediate vicinity, is a popular recreational and hiking area for the Liederbach population. Efforts are being made by the municipal administration to maintain near-natural orchards alongside agricultural areas.

The Liederbach youth club, founded in 2005, offers a meeting point for young people three times a week. There is also a special day for girls. Special excursions and activities such as dance and breakdance courses as well as film and game evenings take place regularly.

In Liederbach there are numerous clubs such as the SGO (Sportgemeinschaft Oberliederbach), in which mainly soccer , judo and women's gymnastics are practiced. There is also TSG Niederhofheim, in which athletics , table tennis , handball , shooting and gymnastics are represented. In addition to these sports, volleyball is also practiced at the VCL (Volleyball Club Liederbach). There are also the Liederbach volunteer fire brigade and the Liederbach German Red Cross .